March 12, 2020
Please make sure these dispatches reach as many readers as possible. Share with kin, friends and workmates and ask them to do likewise.

Amid growing warnings that a substantial section of the global population could become infected in the deadly coronavirus pandemic, US President Donald Trump gave a prime-time address Wednesday characterized equally by its ignorance, its xenophobia and its total indifference to human life.

In remarks consisting almost entirely of self-praise, Trump took no responsibility for the inaction and disarray that has characterized his administration’s response to the crisis. Rather, he presented the botched American reaction—viewed around the globe as a disgrace—as the “best anywhere in the world.”

Trump’s speech included no measures that would slow the spread of the disease and mitigate its effects. He announced no funding towards expanding hospitals or increasing available resources for testing, or even providing the most basic protective equipment for frontline medical workers. Instead, he announced $50 billion in loans to businesses and urged congress to adopt a pro-corporate payroll tax cut: measures that will do nothing to stop the spread of the disease or help the workers affected by it.

Trump treated the pandemic as though it were a foreign invasion. He described the disease as a “foreign virus” that “started in China” and announced unprecedented travel restrictions, banning all non-citizens travelling from Europe to the United States. 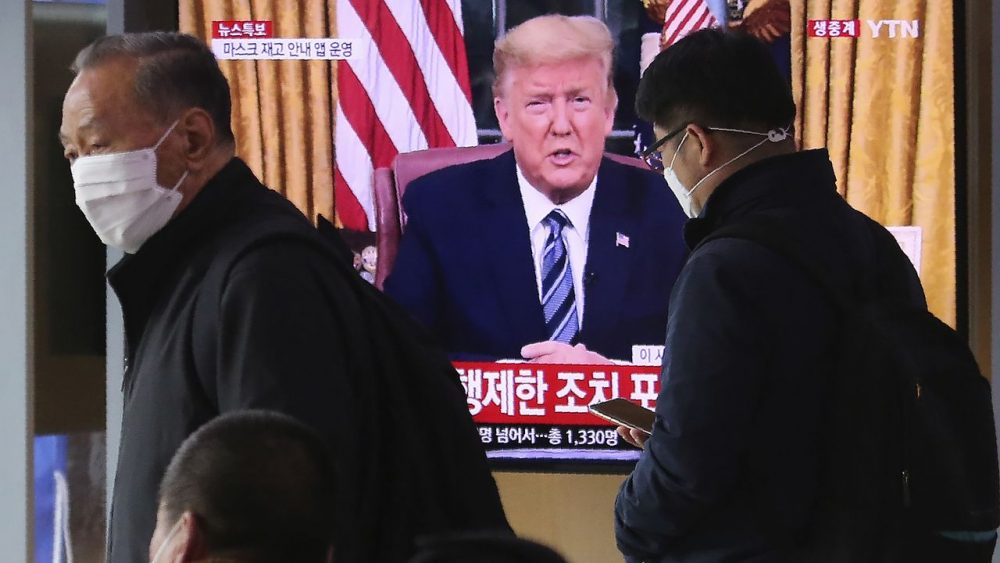 Masked people walk past a TV screen showing a live broadcast of Donald Trump’s speech at the Seoul Railway Station in Seoul, South Korea, Thursday, March 12, 2020. Foreigners have difficulty understanding the degree of US political decomposition and sheer malign dysfunction, as often seen in the Trump administration. (AP Photo/Ahn Young-joon)

Trump, visibly rattled and straining to read from a teleprompter, declared that the restriction would “apply to the tremendous amount of trade and cargo.” As market futures plunged amid what was interpreted as the largest trade restriction since World War II, Trump later clarified on Twitter: “The restriction stops people not goods.”

In his paralysis in the face of a crisis expanding outside of his control and his sociopathic indifference to human suffering, Trump was merely giving particularly perfidious expression to the response in nearly every country to the pandemic.

Less than 24 hours earlier, German chancellor Angela Merkel told a dumbstruck group of lawmakers she expects 60 to 70 percent of the German population to become infected with the deadly disease.

Merkel’s declaration was less a statement of fact than of policy. She was saying, in effect, that no serious measures would be taken to prevent the outbreak from becoming a mass casualty event in her country.

Earlier in the week, a visibly distraught World Health Organization (WHO) Director-General Tedros Adhanom warned that a “moral decay” was taking hold in capitals throughout the world.

Shocked at the seeming rapidity with which governments were giving up on any serious effort to contain the disease, which he attributed to its disproportionate effect on the elderly, Adhanom insisted that “any individual, whatever age, any human being matters.”

Adhanom stated: “Whether it kills a young person or an old person or a senior citizen, any country has an obligation to save that person. So that’s why we’re saying no white flag, we don’t give up, we fight. To protect our children, to protect our senior citizens, at the end of the day it’s a human life. We cannot say we care about millions when we don’t care about an individual person.”

Working people around the world are profoundly shocked by the events of the past week and are struggling to process what it means to live in a world where the lives of their friends, coworkers and loved ones are in imminent danger.

Once workers begin to understand this new reality, they will be moved not by Trump’s fascistic nihilism, but by the conception that the life of “any human being matters.”

Workers must instead demand that immediate and urgent measures be taken to combat the disease. Hundreds of billions of dollars must urgently be made available to ensure a full regime of testing, contact tracing and quarantine, not to mention trillions more for urgently rebuilding the healthcare infrastructure necessary to combat the pandemic.

Paid sick leave and paid time off for taking care of children, and full compensation for the economic effects on quarantines, must be immediately provided to all. Workers cannot wait for the ruling classes to implement these policies but must immediately begin to organize workplace and neighborhood committees to ensure safety, sanitation and the humane treatment of the ill and suffering.

In the end, all of Trump’s lies and obfuscation were an effort to cover up the responsibility of his own government, and the economic interests it serves, for the disastrous spread of the pandemic.

The ravenous spread of the disease is the end result of the constant subordination of human need to profit interests—so-called shareholder value. This market religion, preached for decades from every pulpit, has led society into a blind alley.

ABOUT THE AUTHOR
James Cogan and Andre Damon are senior writers with wsws.org, a Marxian publication.
While using Marxian methods of historical analysis, and working toward a non-capitalist future, The Greanville Post does not endorse Trotkyism or any other specific faction. Thus we republish only those views we regard as useful and largely free of sectarian distortions. In a world in which truth and the correct path to social change, equality and peace are increasingly difficult to discern due to the proliferation of ideologies, information and disinformation sources, and the confusing imperfections and contradictions of many progressive voices, we try hard to give our audience the most reliable roadmap to effective struggle.

What are the symptoms of the new coronavirus?