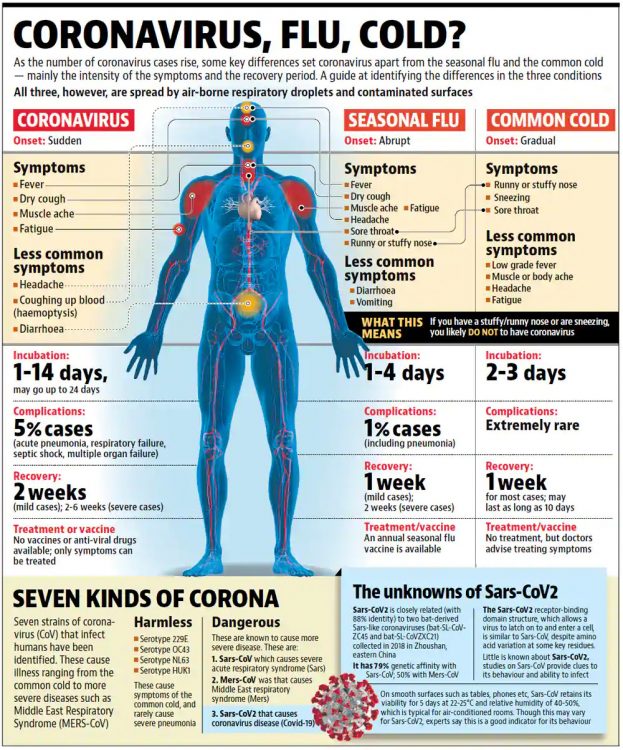 Let's not lose our heads! In all its seriousness, the coronavirus is nothing compared to the "Spanish flu" of 1918, which killed 50 million people worldwide during World War I.

To date, SARS-CoV-2 (the virus that causes Covid-19) has infected more than 200,000 people with almost 8,000 deaths. However, the "Spanish flu" killed 50 million infecting one in five people in the world, yet it cannot be said that it affected the course of the bloody First World War.

Let us remember the hysteria when the HIV/AIDS epidemic was discovered in the 80s and how today we have learned to live with that disease even though no vaccine has been made.

Let's be calm, keep the rules of hygiene that we all know (especially, wash our hands well and be careful when we cough or sneeze) and don't believe the first thing we read or hear: look for reliable sources.

Let's also think about some of the positive effects that the emergency brings to us in the face of this dangerous virus:

- All over the world, and especially in our region, people are learning to respect basic hygiene rules, especially hand washing, which will have an impact on many other diseases that kill millions of people.
- Just three months after the emergency began, two vaccines are already being tested. In record time, China managed to control the Covid-19 outbreak by closing all the temporary hospitals it had to set up because of the drop in cases. In the case of Latin America, we should not forget to acknowledge the huge contribution of Cuban medicine in the fight against the disease.
- The general shutdown of economic activity all over the industrialized world has caused a drop in emissions, both of CO2 and of nitrogen dioxide and fine particles, leaving clearer skies, as indicated by satellite photographs.
- The pandemic has provoked a serious debate about the importance of public health around the world and the unworkability of the "every-man-for-himself" society.
- The pandemic, once the worst is over, will most certainly have a positive economic effect on China, which is being forced to make a series of investments that will boost the global economy. Indeed, China's role in the world will be strengthened while that of the United States will be weakened, which will have a beneficial effect on international relations.

Jorge Capelán is a veteran Nicaraguan journaist, active (among other things) in the struggle to defeat Washington's criminal sanctions against Cuba, Nicaragua and Venezuela, as well a the lifting of the decades-old American blockade against Cuba.

Who Won the Sanders vs. Biden Debate & How Would We Ever Even Know?