Home AMERICAN BRAINWASH COVID-19: Why America May Be Hit Hard for 3-4 Months & What To Do

March 13 · updated March 18, 9:51 am ET · now includes US cases by time, infected people without symptoms spreading the virus, and predictions based on 5 countries.

It’s here. COVID-19 hit China, Europe, and is grinding America to a halt. On March 13, President Trump declared a national emergency. Still, as a PhD in Public Health who specialised in epidemiology, I’m worried. Here’s why:

You are more at risk if:

Symptoms can take up to 14 days to appear. You can transmit the virus even if you have no symptoms (Bai et al. 2020), and possibly 1-2 weeks after symptoms (Woelfel et al. 2020, preprint data). In Massachussets, a cluster of 82 people have been infected by people with no symptoms.

This is Dr. Anthony Fauci from the National Institute of Allergy and Infectious Diseases, at a congressional hearing. “The idea of anybody getting [tested] easily, the way people in other countries are doing it, we're not set up for that.”

Americans are not getting tested. As of March 12, The Atlantic estimates that about 8,000 people have been tested in the US. Compare that to 29,700 in the UK and 210,000 in South Korea, and you can see why the number of confirmed cases in the US is suspiciously low.

In fact, in many states, testing rules are so strict that doctors may not notice a community outbreak until it’s too late.

“It has probably bought us a few hours, maybe a day or two”

This is Tomás Pueyo, on the US administration’s ban on European travel, in an in-depth analysis viewed 28 million times on Medium. When people don’t interact with each other, the virus doesn’t spread. You can see it in the following chart: Chinese regions (except Hubei) contained the outbreak with lockdowns, whereas South Korea, Italy, and Iran reacted late and saw it spread. 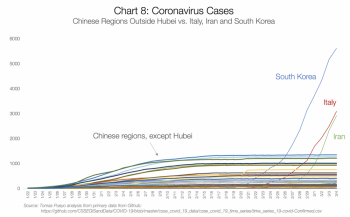 Taiwan (right next to China) acted early. They got only 50 cases out of 23 million people by isolating them (Want et al. 2020).

So the travel ban makes sense. But with so many untested and undetected cases, it’s probably coming in too late. See the lines curving up for South Korea, Italy, and Iran? I'm afraid this is what's coming for the US. But it may not be too late to flatten the curve.

You can slow down the outbreak by keeping your distance. In Italy, the town of Lodi had the first case, and locked down on Feb 23. Bergamo waited until March 8. See the difference: 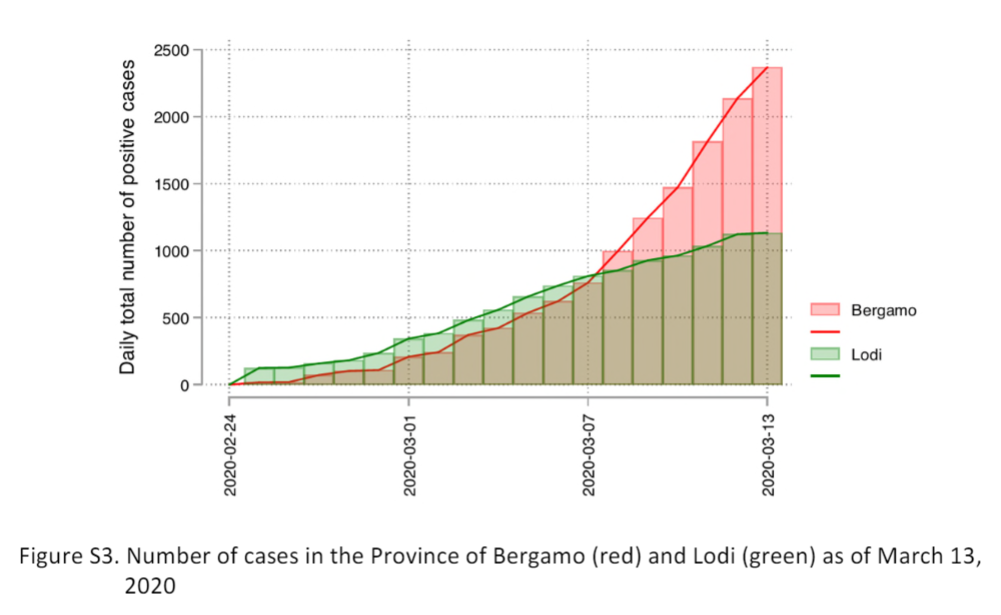 How many people will die?

An initial report on Clinical Characteristics of Coronavirus Disease 2019 in China published in the New England Journal of Medicine (Guan et al. 2020) found 1.4% of patients died. As of March 14, worldwide, 3.7% of the 145,902 people infected suffered the same fate. But rates vary by country. Italy, where more seniors are infected, has a rate of 7.2%. For now, the US is at 2.1%. But with 27.5 million people (9% of the population) without any form of health insurance, it could rise. Why?

“They may be particularly at risk for the coronavirus”

People without insurance often wait until their conditions become serious before seeking medical help, so they could infect many others (CNN, 2020).

In an interview with Berkeley News, Stephen Shortell, PhD, Dean Emeritus of the School of Public Health, explains:

"Financial access to care is simply not a problem in most other developed countries, like Italy and South Korea."

But in the US, without health insurance, the situation could be worse. "Those without insurance tend to be lower income, have less than high school education, work in low wage jobs, live in areas that have more pollution and fewer health resources, and generally are in poorer health. Thus, they may be particularly susceptible/vulnerable/at risk for the coronavirus."

“Many people will go to work sick, causing the virus to spread more widely.”

-Dean Baker, senior economist at the Center for Economic and Policy Research

Lack of paid sick leave is another problem. Here's Stephen Shortell, PhD, on the uninsured again: "Those who are employed are more likely to go to work even when they are ill, because the low wage jobs typically do not have good sick leave policies, and people need the income."

That's why I'm afraid the US may be hit the hardest, and become the next epicenter of the pandemic. So what actions can you take to slow down the outbreak?

That's a scary number. But it comes from the CDC. According to models shared with about 50 expert teams, 160-214 million people in the US could be infected, with as many as 200,000 to 1.7 million dying if no actions were taken to slow transmission.

Of the infected, 2.4 to 21 million could require hospitalization. But the country only has 924,107 staffed beds.

A Flourish chart (<<<—you can also click on this link)

Total cases in Italy, UK, and Iran have been going up for 1 month (see above). South Korea, with great measures in place, has just stabilised after 1 month. The US, arguably, has bad measures in place. So I estimate 1-2 months of total cases going up.

Next, people infected start to recover, or die (1-7%). But new people get infected, so the curve becomes flat. The curve was stable for 1-2 weeks in South Korea and China, with good measures in place.

Then most people have been exposed. You either got it, didn't get it, got sick and recovered, or you're dead. So cases go down. Active cases in China have been going down for 1 month. But people are still dying, and have another 2-3 weeks to go.

Based on the above, I predict 3-4 months total. Still, it's not too late to slow down the outbreak, and avoid overburdening hospitals. What can you do?

The best way to stop the outbreak is to stay home. It worked in China (see lockdowns above). In fact, according to the World Health Organization, even if you have mild respiratory symptoms, you should stay home. Here are more tips from the Organization:

If you can, stay home. Tell your parents and friends to stay home. Especially those aged 65 and up (or with compromised immune systems or a medical condition), as the virus is more deadlyto them. Be safe!

A note to athletes

I work with athletes. If you train, you should watch out for:

Concerned? It might be a good idea to ease off. What to do instead? Sleep, if you're like the 1 in 3 Americans who don't get enough sleep (CDC, 2016). Lack of sleep creates low-grade inflammation and weakens your immune system (Besedovsky et al. 2012). How long should you sleep? At least 7 hours a night (CDC, 2016).

Tell your US friends

Will 200,000 to 1.7 million Americans die, as the CDC experts projected? Not if we act in a big way. “There is a lot of room for improvement if we act appropriately”, said Lauren Gardner, an associate professor at the Johns Hopkins Whiting School of Engineering. So please share this article with your US friends. They need to understand and stay home. Act now, and we can avoid the worst.
ABOUT THE AUTHOR

Dr. Carl Juneau holds a PhD in Public Health, with a specialisation in epidemiology. He usually writes about exercise as the founder and CEO of Dr. Muscle. Email · Facebook · LinkedIn.  Got a comment? Join the conversation on Facebook.

False Claims About The Novel Coronavirus And How To Debunk Them

Article based on bad stats. Most reliable death count China (because it has test kits that work) COVID-19 death rate less than 2%. 14,000-22,000 dead from virus in USA. No not COVID-19, last year’s flu. Big Media and government offers NO comparative with other flu-like and/or coronaviruses over the last few years. What we know for sure: US government is instituting police state like authoritarian population controls using flu as an excuse. Best way to combat COVID-19: Do not obey.