False Claims About The Novel Coronavirus And How To Debunk Them

March 19, 2020
Please make sure these dispatches reach as many readers as possible. Share with kin, friends and workmates and ask them to do likewise.

Today China reported zero new domestic cases of novel coronavirus infections. It has beaten the epidemic just as we predicted early on. Other countries with still expanding epidemics will have to adopt all the measures China has taken to also win the fight. 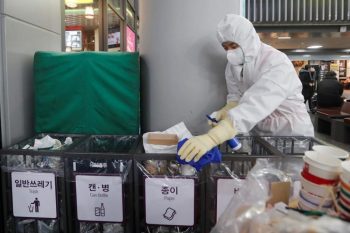 Our extensive reporting about the novel cornonavirus has attracted many new commentators to this site. Unfortunately some of these, as well as some of the regulars, continue to spread disinformation and myths about the current pandemic and its causes.

To keep some level of quality at this site requires an aggressive countering of such comments. But our capacity to do so is limited. We do delete comments that are nonsensical or have been debunked and we do block people who insist to post or repost nonsense. But there are now many more comments per day than we can read. We therefore have to ask other commentators to counter the bad false ones.

Here are some of the false claims that are made about the pandemic and the facts needed to debunk them.

The novel coronavirus SARS-CoV-2 is a Chinese virus that comes from bats. It infected people because Chinese people eat bats.

The source of the virus is actually not known. The patient number 1, the person who first carried the virus, has not been found. The Wuhan wet market where exotic animals are sold was not the source of the outbreak:

The paper, written by a large group of Chinese researchers from several institutions, offers details about the first 41 hospitalized patients who had confirmed infections with what has been dubbed 2019 novel coronavirus (2019-nCoV). In the earliest case, the patient became ill on 1 December 2019 and had no reported link to the seafood market, the authors report. “No epidemiological link was found between the first patient and later cases,” they state. Their data also show that, in total, 13 of the 41 cases had no link to the marketplace. “That’s a big number, 13, with no link,” says Daniel Lucey, an infectious disease specialist at Georgetown University.

While the novel corona virus might be one that was originally carried by bats it is unlikely to have jumped from a bat to a human. The older SARS virus, which is somewhat similar to the novel coronavirus, originated from bats but first spread to other animals before mutating from there into a form that infects humans.

The only place where bats are used as regular food is the Pacific island Palau which is more or less a U.S. colony. Videos showing Chinese citizens eating fruit bat soup were actually filmed on that island.

The virus is related to HIV, the virus that causes aids.

Some Indian researchers found four genome sequences in the novel coronavirus that can also be found in the HIV virus. They self published their findings in a paper that was not peer reviewed. We discussed that paper in detail on February 1 in our second post on the virus and we strongly expressed our doubt about its veracity. A few days later the paper was retracted by its authors after other scientists had pointed out that the lengths of each of the four sequences they had compared were way too small to be of statistical significance.

Asian people are genetically more receptive for the novel coronavirus.

The virus enters human cells by binding to the ACE-2 receptor on the cells hull. There were assertions that people in Asia have more ACE-2 receptors than people elsewhere. But detailed studies of various genome sequence databases have found no statistical basis for such claims. People of Asian, Caucasian or African heritage all have the same numbers of ACE-2 building elements and receptors. The virus will effect them equally.

The virus originated from a military weapon research laboratory.

There is zero evidence that the virus is from a Chinese or U.S. or other (weapon) laboratory and the claim actually makes no sense. The genome of the virus consists of more than 23,000 ‘letters’. It is significantly different that the genome of other known viruses. To artificially create such a complex entity and to test all its variants would have been a program of the size of the Manhattan project and would have cost billions.

Weapon researchers are sane people with a limited budget. They look for methods to defeat an enemy. A virus that affects all humans indiscriminately but kills mostly very old ones would have no military value.

Moon of Alabama has downplayed the danger of the virus.

Our first post on the issue was headlined The Coronavirus – No Need To Panic. It discussed the infectiousness and fatality rate of the novel coronavirus disease in comparison to other virus caused diseases. We pointed out that it is less infectious and less deadly than for example SARS but never said that it is not dangerous at all. In fact the numbers we pointed out said the opposite.

The piece simple set the current epidemic into perspective. We have since posted a total of 15 detailed pieces on the pandemic. To claim that this is a downplaying of the issue is nonsensical.

—
Previous Moon of Alabama posts on the issue:

I think China showed what an effective state action is, but the west seems to be acting now, and I doubt the number of cases will surpass 1 million in most European countries.. Which, given China’s relative 10x size, would mean China would have performed 100x better by the end of this probably.

Freedom-lovers here, are you happy now?

The letter of admonition that deceased doctor Li Wenliang received from police after he warned about a SARS-like virus in the central Chinese city of Wuhan was an “improper law enforcement procedure,” an investigation into Li’s case has found.

The investigation was carried out by the National Supervisory Commission, an anti-corruption body.The results were published on Thursday.

The ophthalmologist raise an early alarm in social media platform and the messages were widely circulated online. He was reprimanded by police, who accused him of spreading rumors.

Li later tested positive for the new coronavirus and passed away of the infection on February 7. His story prompted public outrage and an investigation into the case.

The commission advised supervisory authorities in Wuhan to guide the public security organ to punish officers involved in the case and withdraw the letter.

Justice is done, rule of law was applied.

However, as we delve deeper into the story, the case for a “CCP covered the epidemic for two months” gets weaker and weaker: as the article states, dr. Li Wenliang was an ophtalmologist. Ophtalmologists are not pulmonologists, therefore not experts in exotic respiratory diseases. Earlier news highlighted the fact that he thought it was common SARS, and he didn’t seek the authorities. Instead, he chated with ten friends and told them not to tell anybody.

This was far from the hollywoodian doctor crying out loud ignored by the evil authorities cliché.

to which i replied:
there is much obfuscation currently going on regarding this virus, so it is nice to see you referring to an article where we can cut through the disinformation currently doing the rounds.

ABOUT THE AUTHOR
“b” is the nom de guerre of Moon of Alabama’s founding editor.

Jimmy Dore proves it: Both Biden and Trump Spreading Misinformation on Corona Virus