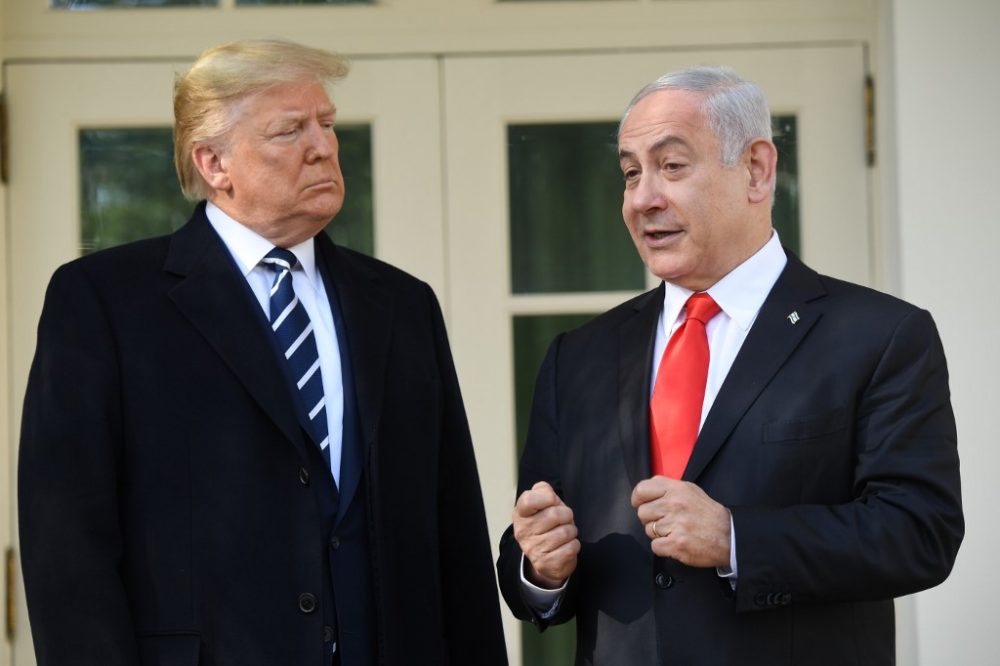 Netanyahu with one of his main bootlickers (via Sheldon Adelson).

Israel's prime minister Benjamin Netanyahoo has used the corona crisis to launch a coup.
Netanyahoo has served as caretaker prime minister since December 2018. Three parliament elections have since ended in stalemate. The first two, in April and September 2019, left him and his top opponent, the former army chief Benny Gantz, without sufficient parliamentary support to establish a government. Israels parliament, the Knesset has 120 seats. Gantz' Blue and White has won fewer seats than Netanyahoo's Likud (33-36).

But following the third round, early this month, Gantz assembled a narrow majority of parliamentary supporters and on March 16 President Reuven Rivlin tasked Gantz with forming Israel’s next government.

Netanyahoo is accused of bribery, fraud and breach of trust and the trial against him was scheduled to open on March 19.

On Sunday March 15 at 1:50 am Netanyahoo announced that the courts would be closed for public health reasons. His trial has been moved to late May. He also ordered the internal security service to secretly track the cellphone data of those suspected of possible infections. His Health Ministry prohibited any gathering of more than 10 people and instructed the parliament to also follow that rule.

On March 16 the newly elected Knesset members were sworn in three at a time by Knesset Speaker Yuli Edelstein. But two days later the speaker, a member of Netanyahoo's Likud party, refused to convene the house quoting the new health guidelines.

Without a house session no new speaker can be elected and the parliament would be out of business until some unknown time in the future. Meanwhile Netanyahoo is using emergency regulations to run the country.

Unable to use his majority Gantz asked the Israeli high court to intervene. This Monday, March 23, the court ruled without dissent that the speaker must convene the house for a plenum vote today. But that did not happen. Speaker Edelstein refused to follow the high court order, publicly resigned and said he had no intention of calling for a vote in the next 48 hours during which he is still the formal speaker.

On Friday the most senior lawmaker, Labor chief Amir Peretz, will become the interim speaker of the Knesset.

Should he call for a parliament session the first vote of the new Knesset would be for a new speaker and Gantz ally Meir Cohen is likely to win that vote. The next vote would then be on the arrangement committee which plans the parliament's agenda. Only then could the parliament start with some oversight over Netanyahoo's current movements.

But for now there is no parliament speaker, no deputies and no arrangement committee to convene and formally open the parliament. The Gantz coalition asked the High Court to hold Edelstein in contempt but as a Member of the Knesset Edelstein can claim immunity. That immunity again can only be lifted by a parliament vote.

By a series of moves Netanyahoo has neutralized the courts and the parliament and has thrown the country into a constitutional crisis. Even cabinet sessions are only held by telephone and without the cabinet members receiving the written proposals Netanyahoo wants them to vote on.

Meanwhile Netanyahoo puts out new emergency regulations every day that steadily get harsher:

Anyone who leaves their place of residence for reasons not exempted by the emergency regulations is liable to be fined up to NIS 5,000. A person who has gone beyond the permitted distance [of 100 meters] could receive an NIS 500 fine or six months’ imprisonment, while one who operates public transportation in violation of the regulations can be fined NIS 5,000 or be imprisoned for six months.

The emergency regulations were approved last night by the cabinet.

In which democracy can a cabinet enact imprisonment penalties without a parliament vote on an applicable law?

Netanyahoo's current plan seems to be to go for a fourth election. Every second day he is holding a prime time TV briefing to update the population on the corona crisis. That will likely bring him additional popularity. Even Trump's approval numbers for handling the coronavirus crisis are at 60% despite his botched response.

Gantz's current majority depends on support from the Arab parties. He will have difficulties to form a stable coalitions with them. His only alternative is to ally with Likud and that would likely keep Netanyahoo at the helm. If Gantz agrees to keep Netanyahoo at the top his Blue and White party may well fall apart.

By blocking the courts and parliament Netanyahoo wins time to make that scenario more likely.

Meanwhile the novel coronavirus will indiscriminately affect the Jewish as well as the Palestinian population. But the Zionist racism against the Palestinians guarantees that they will get less help. As both populations can not be separated that behavior will likely increase the peak and the consequences of the outbreak for everyone. Additionally the Haredim cult members will protest against the government's measures of prohibiting religious services and passover festivities. The current mixture of political, racial and epidemic pressure in Israel may well blow up in everyone's face and cause serious conflagrations.

Of possible interest: Remdesivir Changes Access Outside of Clinical Trials