April 3, 2020 6 minutes read
Please make sure these dispatches reach as many readers as possible. Share with kin, friends and workmates and ask them to do likewise. 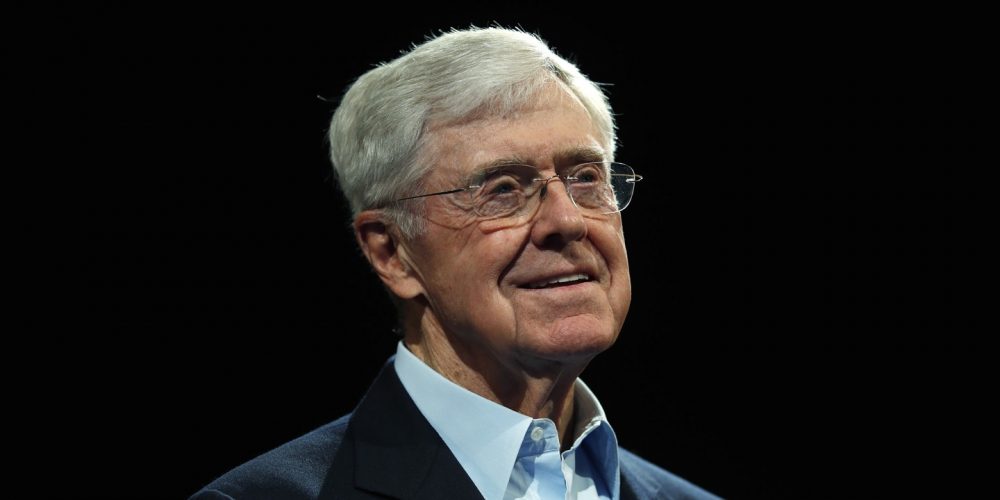 Criminal plutocrat Charles Koch enjoys a  direct line to presidents' ears and of course lavish treatment by the whore media.

The work of mean-spirited libertarian billionaires is never done.

AMERICANS FOR PROSPERITY, the pro-corporate pressure group founded and funded by billionaire industrialist Charles Koch, wants employees to return to work despite desperate pleas from public health officials that people should stay home as much as possible to help contain the spread of the coronavirus.

“Rather than blanket shutdowns, the government should allow businesses to continue to adapt and innovate to produce the goods and services Americans need, while continuing to do everything they can to protect the public health,” said Emily Seidel, chief executive of AFP, in a press release.

Some of the group’s state chapters have taken a similar tone. AFP Pennsylvania’s state director, as well as a regional director with the group, have taken to Twitter to lambast shelter-in-place policies. The Michigan chapter of AFP on Monday slammed Democratic Gov. Gretchen Whitmer’s stay-at-home order, which closed down fitness centers, nail salons, amusement parks, casinos, and other businesses deemed nonessential, calling it the “wrong approach for our state.”

“All businesses are essential — to the people who own them, the people who work in them, and the communities they serve,” said Annie Patnaude, the Michigan state director for AFP, in a statement responding to the order.

If you are wondering where #DonaldTrump got the idea to end the #CoronavirusPandemic quarantines, stay at home orders. It came from the #KochNetwork These are 2 staffers of the network agitating for businesses to reopen.
They will be safe working at home. pic.twitter.com/CVXjhCKVrz

AFP’s position, which directly contradicts the advice of medical experts who say that social isolation is essential to curbing the spread of the coronavirus, comes after the group lobbied the Trump administration in 2018 to rescind $1 billion from the Centers for Disease Control and Prevention.

Much of AFP’s recommended cuts to government programs, which included CDC money for infectious disease control and global health, became part of the official White House budget request, though most were not adopted by Congress.

The cuts, AFP argued, would “relieve the burden overspending is placing on all taxpayers.” The CDC is now one of the front-line organizations dealing with the coronavirus pandemic, which has impacted nearly 70,000 people in the United States and has claimed over 1,000 lives.

The libertarian advocacy network has spent tens of millions of dollars lobbying for corporate tax cuts, deregulation, and reductions to social welfare programs, particularly state Medicaid programs. This aggressive advocacy record has come into focus in recent days as Americans confront the coronavirus pandemic. Medicaid funding is seen as a critical tool for treating sick patients, and many are now questioning the wisdom of reductions to the CDC’s funding and staff.

Internal memos from AFP reveal the size and scope of the organization, which employed 650 staff members during the 2016 election and has successfully worked to block Medicaid expansion in at least four states. During the 2016 election, the group also aired negative advertising sharply criticizing Hillary Clinton and Senate Democrats, an electioneering push that dramatically shaped the current balance of power in Washington, D.C.

The group has since used its government influence to slash environmental rules, retreat from the Paris Climate Accord, and demand cuts to federal programs. It also helped secure $1.5 trillion in tax cuts as part of President Donald Trump’s 2017 tax overhaul.

Experts around the country have called for shelter-in-place policies for nonessential businesses, arguing that social isolation can drastically curb the spread of the coronavirus. Slowing the pandemic, they say, can save lives by lowering the demand for medical supplies and limited hospital beds. Despite their medical necessity, these policies are being rejected by conservatives around the country. Republican state leaders, including Mississippi Gov. Tate Reeves and Florida Gov. Ron DeSantis, have balked at shutdown requests. On Tuesday, Reeves signed an executive order superseding local bans on public gatherings.

Dr. Anthony Fauci, the federal government’s top infectious disease expert and a member of the White House coronavirus task force, has said he has “emphasized very emphatically” that bars, restaurants, and other nonessential businesses close and that those who may work from home do so.

The Intercept asked AFP if the group had consulted any public health officials before beginning the push against shelter-in-place policies, and whether the group continues to support steep cuts to the CDC.

The group did not respond to the inquiry regarding the CDC and did not name any public health experts.

A spokesperson for AFP noted in an email that they are “encouraging every public official dealing with these incredible challenges to consider how communities and businesses are adapting to meet critical needs as they make these difficult decisions” and that the group believes that there is “value in businesses and government working together to stop the spread of this virus and help the people who need it.”

The Koch network, while pushing for businesses to stay open, is taking the opposite approach for its lobbying apparatus. AFP and its affiliates, including LIBRE Initiative and Concerned Veterans for America, are now working from home. “Out of an abundance of caution and to ensure the health and safety of our activists, staff, and voters, our staff are working from home and are utilizing digital organizing as one way to continue their grassroots engagement,” a spokesperson from AFP told CNBC.
ABOUT THE AUTHOR

Lee Fang (born October 31, 1986) is an American journalist. He is currently an investigative reporter at The Intercept. Previously, he was a reporting fellow at The Nation Institute and a contributing writer at The Nation.[1] Fang was also a writer at progressive outlet the Republic Report.[2][3] He began his career as an investigative blogger for ThinkProgress.[4] In 2018, the Izzy Award of the Park Center for Independent Media was awarded to Fang and fellow Intercept reporter Sharon Lerner, and was also shared by investigative reporter Dahr Jamail, and author Todd Miller.[5]

In search of a coronavirus killer: Can existing drugs really turn the tide in the Covid-19 pandemic?