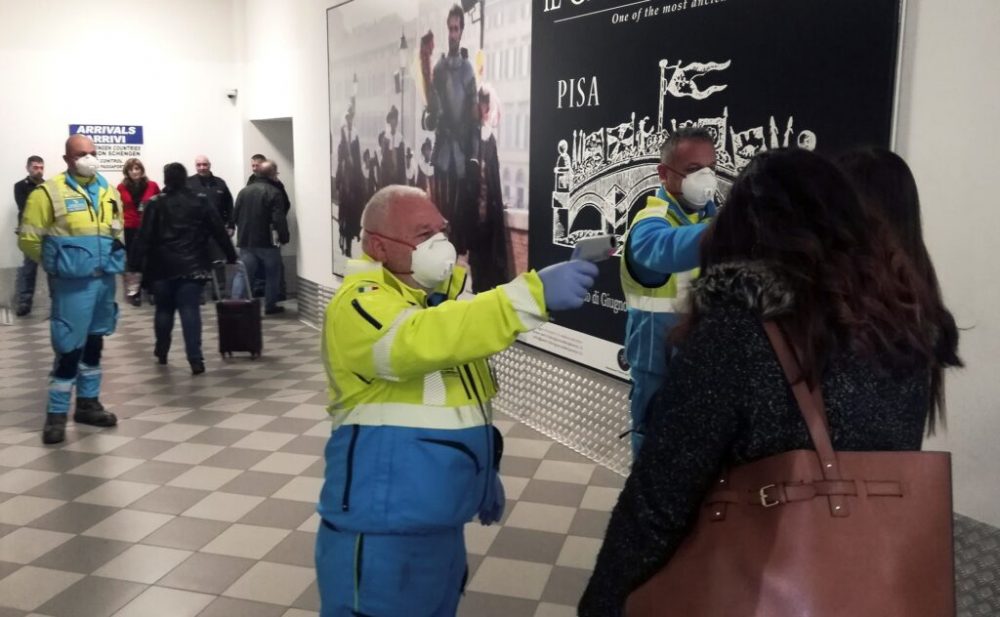 There are a few new studies about the novel coronavirus epidemic that are of interest for everyone.

From Science comes a study with new epidemic data that evaluates a smartphone based system that could alarm those who have come near a person which later developed Covid-19 symptoms. Such a system is used in South Korea.

The new epidemic data in the study is of interest. 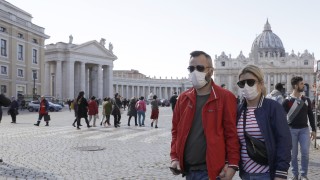 It says that the basic reproduction number R0 or R naught for the novel coronavirus is 2.0. Under normal circumstance a new carrier of the virus is likely to infect two other people. This is a higher value than for the seasonal flu but a bit lower than previously thought.

But what the makes the novel coronavirus really different is that it starts to spread before the spreading person has developed symptoms.

The virus starts to replicate in significant numbers (billions per mililiter) on day 2 after the infection. The virus first replicates in the upper throat and the infected person starts to spread it to others simply by breathing, talking or coughing. Only on day 5 the infected person starts to develop first symptoms. The virus migrates into the lower lung and replicates there. The virus load in the upper throat will then start to decline. The immune system intervenes and defeats the virus but also causes additional lung damage which can kill people who have already other preexisting conditions. (Interestingly smokers seem not to develop cytokine storms during a Covid infection and are thereby less prone to end up in the ICU.) On day 10 only few viruses will be found in the upper throat and the person will generally no longer be infectious.

The typical hospitalization point in China was only on day 9 to 12 after the onset of symptoms. At that point a test by swabs is nearly useless as the infected person will normally no longer have significant numbers of the virus in the upper throat. Reports of "defective tests from China" were likely caused by a lack of knowledge about this phenomenon. The diagnose in these later cases should be done by a CT scan which will show the lung damage.

We do know since late January that people can transmit the virus even when they have not yet developed symptoms. An open question was how many of new infections happen during this phase.

The new Science study investigated how many infections were created by each of four infection phases or types:

More new infections are created during the three pre-symptomatic days the virus carrier runs around then during the symptomatic one.

Washing one's hands helps but environmental infections happen only in 10% of all new infections. The pre-symptomatic carriers are, without knowing it, the biggest spreader of the disease. Millions of the many billions of viruses that get created in their throat can attach to tiny water droplets or aerosols while a person breathes, speaks or coughs.

Such spreading can be prevented when everyone wears a mask. A different new study shows that masks are very effective. Published in Nature the study is titled:

The graphic (here cut off for only corona viruses) shows how masks can keep away your droplets from the people you meet and talk to. 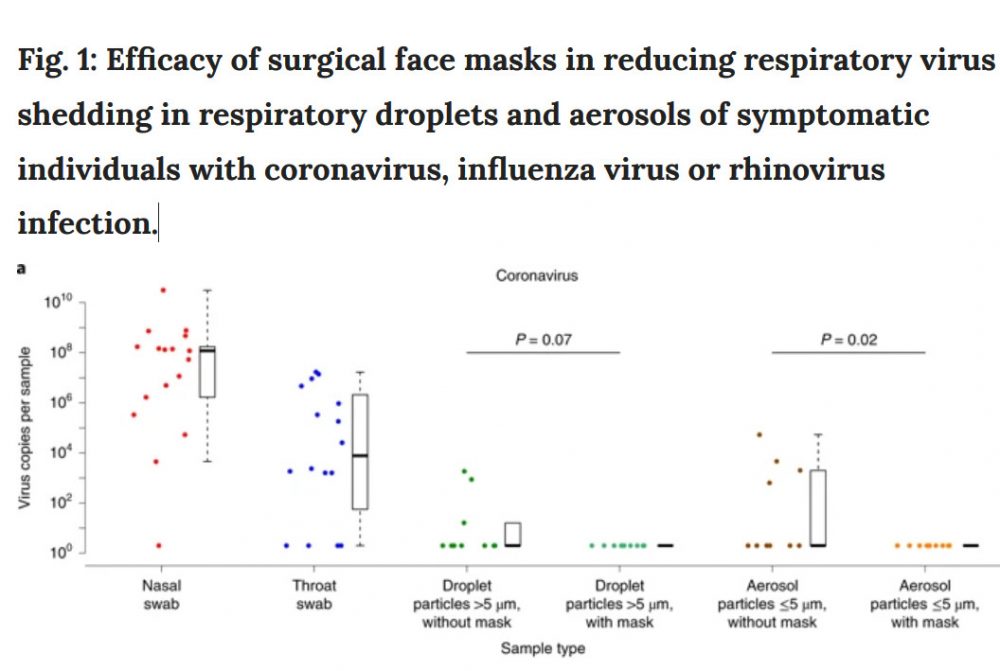 If the carrier of a virus wears a mask the spreading of viruses due to speaking, coughing or even breathing goes basically down to zero.

But a mask does not only protect the carrier of the viruses. While homemade or even professional surgical mask do not protect the wearer from all particles they do protect one much better from them than when one wears no mask at all.

A person rarely gets infected by just one virus particle. They come in millions attached to tiny droplets. We do not know yet how the dose of the novel coronavirus that infects a person affects the intensity of the disease. But we do know from other viruses that the dose matters. People who catch a higher dose of viruses will usually have a more intense disease. A mask can lower the virus load the wearer may receive.

One can improvise a mask from simple household objects. One can sew a mask like a surgeon does in this video. This is my preferred model which is officially recommended by German fire departments. (The pdf is in German but the pictures tell the story). This is the mask I made by following those instructions. 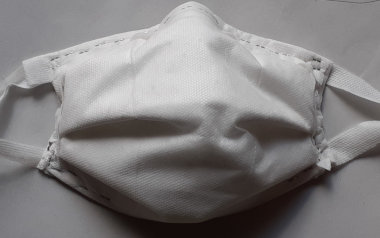 It is made of a folded sheet cut from a triangular arm-sling out of an old first-aid kit. A HEPA microfilter (as used in a vacuum cleaners) is in between the folded sheet. A piece cut from a clean bag for vacuum cleaners will do as well. Do not use a sheet or insert that is too tight to breathe through. If one does that the air will come in from the sides of the mask and the total protection effect will be less. It can be arduous to breathe through such a mask. If you have breathing problems leave the insert out. The sheets alone are already good protection. There is a piece of wire from a big paper clip fixed inside the middle of the upper seam to fit the mask tightly around the upper nose. The lower part goes under the chin. I shaved my beard to make it a tighter fit. As I had no sewing equipment I used a stapler to fix the seams and the ribbons.

The HEPA filter catches particles down to 0.3 micrometer. Viruses are some 125 nanometer in diameter so they are smaller and could slip through. But the viruses are attached to some droplet that are bigger. HEPA filter are essentially labyrinths of small fiber and the viruses would have to bounce multiple times to get through. Finally the dose also matters.

The science says that masks work. Everyone should use one. #MaskUp!

---
Here some additional links which might be of interest.

So far, to the frustration of both the White House and the intelligence community, the agencies have been unable to glean more accurate numbers through their collection efforts.

That's because the Chinese numbers are as correct as they can get.

The Chinese are, therefore, correct in not including the asymptomatic in the statistics.

No one actually took seriously the idea that masks were ineffective against the virus. The governments poo-pooing masks only said so because they failed to secure enough supply.

Bernhard, you are doing great work, and saving lives with your solid information.

This is why people who come to MOA should support MOA. It's a one-man effort of exemplary importance. Donate to keep 'b' going.

About droplets, it seems wrong to believe than one droplet is enough to make you sick, isn't it? (that is what makes people panicking and accept the lockdown because they are afraid touching the elevator buttons etc).
In February when the first cases were declared in Bethleem (South Korean tourists if I remember correctly) I think the contact story was made with the people who had spent at least 15 mn with the group.

After saying masks are useless, the above the fold headline in my newspaper this morning was "Trump: Masks Are Good." Another important revelation is the fact that other mammals can get the disease, cats being the most important, IMO. The wife expects one of us 4 household members--effectively two pairs--to get the disease, but then she's a plan for the worst type. I'm much more optimistic, although I've advocated masking-up since January.

In search of a coronavirus killer: Can existing drugs really turn the tide in the Covid-19 pandemic?

Moon of Alabama pushes back against those claiming...