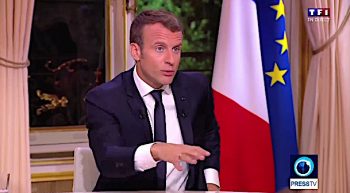 France's Macron administration is now openly accusing the Americans of foul practices in a time of acute distress, and Germany is joining in. Covid-19 may end up shredding the Atlantic alliance.

The scarcity of safety equipment essential to the coronavirus fight is fuelling tensions between long-time transatlantic allies, with local officials in France and Germany accusing unnamed Americans of using unfair means to obtain protective masks.

Berlin’s state interior ministry blamed the US for confiscating 200,000 masks ordered from a US producer when they were in transit through Bangkok. French officials have accused unidentified Americans of paying over the odds to secure masks in China that had already been earmarked for France.

The US embassy in Paris said any suggestion that the federal government was involved in such practices was “completely false.” There was no immediate response the allegations from the White House or the State Department.

“We view this as an act of modern piracy,” Berlin Interior Minister Andreas Geisel said. “You cannot act in such a way among transatlantic partners. Such wild west methods can’t dominate, even in a time of global crisis.”

With hundreds of their citizens dying each day, the incidents highlight the fundamental distrust between the US and Europe. It risks hampering efforts to collectively tackle the damage unleashed by a virus that has brought the world’s economy to a standstill.

The degree of suspicion also feeds into a narrative that it’s every nation out for itself as Europeans are also viewing with greater scepticism offers of help from Russia and China, wondering if there are strings attached.

French Prime Minister Edouard Philippe said on Thursday that his administration has seen orders cancelled as a result of the global shortage of protective gear. Some French officials are blaming unidentified Americans for swooping in to outbid them as they try to secure supplies.

“A load was taken from us by Americans who overbid on a batch that we had identified,” Valerie Pecresse, regional president of Paris, told broadcaster LCI on Thursday. “We pay on delivery because we want to see the masks, while Americans pay cash and without looking. Of course this is more attractive for those who just seek to turn a profit on the back of the world’s distress.” She didn’t say whether the people involved were federal officials, company representatives or private individuals.

The pandemic has left governments, companies, charities and individuals around the world competing for scarce supplies of protective kit and medical equipment as health care systems face an unprecedented surge of highly infectious patients with acute, sometimes deadly respiratory problems.

3M on Friday defended its decision to export respirators from its US facilities to Canada and Latin America, saying there would be “significant humanitarian implications” from halting supplies. Trump earlier threatened retribution against the company for sending masks and ventilators outside the US

The head of the Grand Est region in France, Jean Rottner, told RTL radio that his representatives had been outbid by rivals from the US when they were trying to source masks.

“On the tarmac, Americans take out cash and pay three or four times the price for our orders, so we really have to fight,” he said. A spokesman for Rottner declined to comment.

With the whole world trying to buy masks from China, it’s possible that there may have been some “incidents” involving the delivery of orders, an official in the President Emmanuel Macron’s office said.

“The United States government has not purchased any masks intended for delivery from China to France,” the US embassy said in an emailed statement. “Reports to the contrary are completely false.”

France has taken delivery of 1.7 billion euros (US$1.8 billion) worth of masks already and the volume is set to increase after this week’s air shipments arrived as planned, Macron’s aide said. The president has promised that France will be able to produce all the masks it needs domestically by the end of the year as the administration works to ramp up production.

The Stage Is Set for a Venezuela October...