An editorial by Strategic Culture, which we endorse

Editor's Note: We have only one difference with the editorialists, and that is their making the US and China equal in perfidy while hurling accusation about bioweapons use and intent. That in our view disregards several important facts. For one, it has been US policy to make war on China, overt and covert for generations, taking such hostility to new heights in the last few years. China does not need to attack the US in any shape or form to continue its ascendancy, but the reverse is true for the US: it feels a pressing need to attack and destroy China as a rival power by any means necessary, as it seeks to maintain its global hegemony and has always shunned multilateralism's peaceful coexistence. It is also a fact that it is the US and its allies that have waged biowarfare on several occasions, notably in Korea and Vietnam and possibly the Middle East. The only other major case is Japan, which conducted experiments in that type of warfare during WW2, and whose expertise in this sordid craft was transferred to the Pentagon courtesy of the CIA at the close of that conflict.  America today has scores of biolabs in various international locales, labs that are outside the host nation's sovereign right to inspect them. Corrupt states such as Georgia, Ukraine and Moldavia, among others, host such installations, while the US media pays little or no attention. Third, the evidence continues to accumulate pointing to the fact the Coronavirus causing Covid-19 is likely to have originated outside China, being instead imported into Wuhan, intentionally or accidentally.  —PG 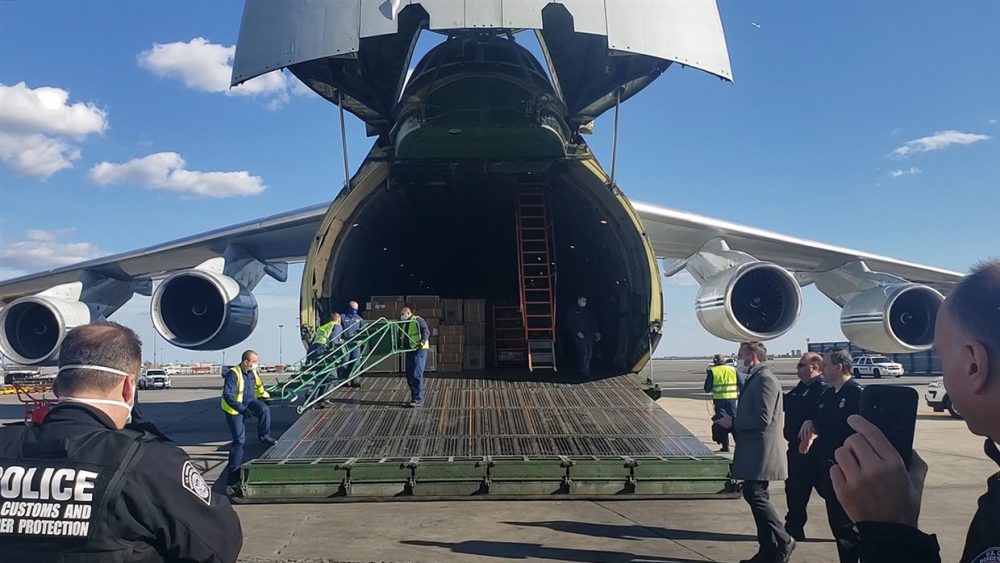 A Russian Aerospace Forces plane carrying medical equipment lands at John F. Kennedy International Airport on April 1, 2020.  China, Russia and Cuba have sent relief supplies and medical missions to a significant number of countries around the globe, while the US, Britain and the EU have done nothing of the sort. (TASS)

“Fiddling while Rome burned” was how historians cast the ineffectual Roman emperor Nero when the ancient city was consumed by flames in 64 AD.

The same expression could now apply to certain Western states, ideologues and pundits regarding the present coronavirus pandemic.

One would think that given the global emergency it would be entirely apposite to put aside antipathies and hostilities in order to work together as common human beings motivated by solidarity, compassion and a sense of survival. Lamentably, and bizarrely, this seems not to be the case.

This week, Russia sent a huge cargo plane to the US with medical equipment to fight an escalating epidemic of the deadly disease. The US is on track to become the new epicenter of the pandemic, partly because the country has critical shortages of equipment. The gesture of solidarity from Russia was promptly arranged after President Trump phoned Russian counterpart Vladimir Putin requesting assistance.

Pathetically, however, the humanitarian aid was cynically twisted by diehard Russophobes who dismissed it as “a propaganda coup” for Moscow. It was speculated that Russia was trying to exploit the move to gain “leverage” over Washington in order to rescind economic sanctions. It was also speculated that Putin was trying to show the world that Russia is superior to the US.

Fortunately, such mean-spirited views were not widely taken up by the US media. Which would tend to show that most people can see how such views are irrational, inappropriate and indecent. For we are in a global situation where the priority must be concerted collective action to contain this pandemic. All other considerations, in particular dubious ideological caricatures, are indeed tantamount to “fiddling while Rome burns”.

In just a matter of a few weeks, the world has been taken by storm due to the Covid-19 disease which has spread from China, ravaging Europe and North America. This week, the global death toll surpassed 50,000. Potentially, the death toll in the US could reach into the millions.

Nevertheless, the persistence of Cold War ideological mindsets – seemingly immune to the necessary common response to overcome the Covid-19 emergency – is a depressing sign of failure in political and moral leadership.

This week, the US, Britain and European Union blocked a Russian draft resolution at the United Nations calling for the end to all unilaterally imposed international sanctions. The call for ending sanctions was also backed by the UN General Secretary, Antonio Guterres.

All impediments to fighting the spread of the disease must be removed. It is a matter of practical exigency.

Sanctions imposed on countries inevitably add further difficulties to combat the pandemic. As the epidemiology of the disease demonstrates, no country is immune to it. If it exists in one place, it will eventually disseminate to all others. Surely then, a global strategy of cooperation is required, and part of that strategy must be to ensure that all countries are empowered to defeat the pandemic. That empowerment involves giving nations full economic freedom to muster resources and obtain international medical aid. In that context, sanctions are an enemy of the correct response. Worse still, such sanctions at this time can be seen as barbaric.

Russia, China and Cuba – three countries which have endured Western unilateral sanctions – have shown commendable international solidarity in recent weeks. Those countries have sent medical equipment and personnel to badly stricken nations. Italy – one of the worst hit with nearly 14,000 deaths so far – has thanked Russia for its assistance.

Yet, the veritable gestures of solidarity have been shamefully twisted by Western Russophobes, as with the case of Russian aid to the US.

Some European Union parliamentarians and an EU so-called media watchdog accused Russia and China of running “disinformation campaigns” about the Covid-19 pandemic. They claim that Russia and China are trying to “sow division” and “undermine public trust” in Western governments. (Admittedly, China and the US have both engaged in unseemly claims about bioweapons, but that verbal skirmishing is marginal to the central problem.)

Vladimir Chizhov, Russia’s envoy to the EU, slammed the indecent accusations as showing “poverty of intellect”. It may also be said such accusations betray a “poverty of humanity”.

The Covid-19 pandemic can be seen as a powerful leveler. The common threat to humanity reminds us of our common humanity. All distinctions within and between nations now seem redundant. The priority is collective action for the greater good.

For those suffering from Russophobia, there seems to be no cure, except for their own obsolescence and downfall.