Another important dispatch from The Greanville Post. Be sure to share it widely.
This is a highly unusual film, a quiet, at times lyrical, other times creepy documentary on the small mansions —actually impressive mausoleums—where Mexico's most notorious drug lords (and other victims of the drug war) lie at rest.  Hauntingly, most of the residents in this city of the dead are extremely young. A meditation on culture and class, the images say a lot about the almost infinite ability of the poor to go on living under almost any circumstances, and about the people of Mexico's unique attitude toward death and their apparent stubborn belief in an afterlife. —PG

EL VELADOR (2011)
From dusk to dawn Martin watches over the extravagant mausoleums of Mexico's most notorious drug lords. 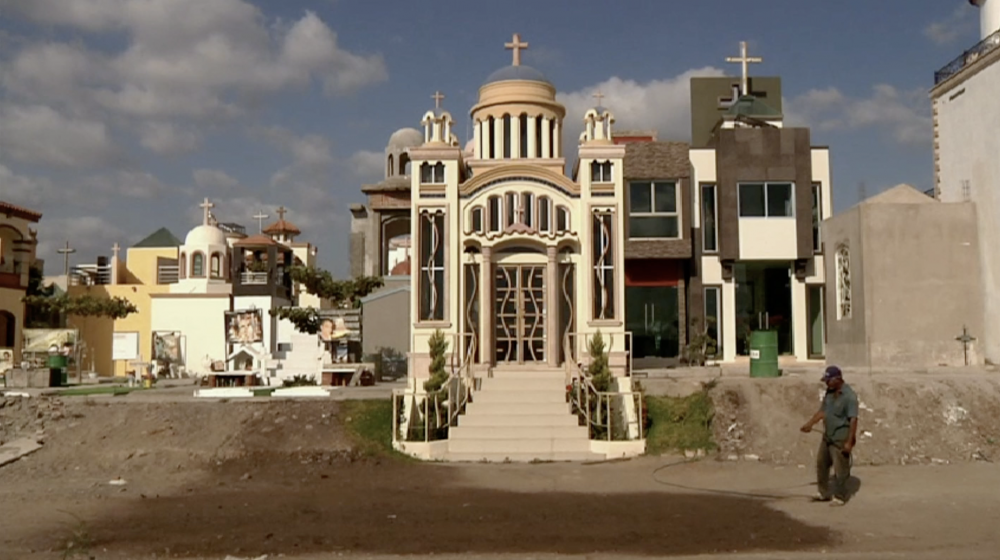 At times it looks like a fancy neighborhood, but the extravagant little mansions have a different purpose.

Martin, the night watchman, arrives with the setting sun in his rumbling blue Chevrolet. The cemetery mascots, EI Negro y La Negra, chase his truck down the road and greet him with wagging tails. The sound of construction fades away as the daytime workers leave and Martin is left alone, looking out over the skyline of mausoleums where Mexico's most notorious drug lords lie at rest. Crosses and steel construction bars pierce the purple and pink sky. As night descends luxurious cars fill the dirt roads. Mercedes, a sexy young widow, arrives with her little girl in a pristine white Audi. A portrait of her husband, a corrupt policeman holding a machine gun, watches over them as they sweep and mop the shiny marble floors. The coconut vendor's radio blasts a gory list of the day's murders: 'Culiacan has become a war zone.' The buzz of cicadas fills the air with anticipation. Through Martin's vigilant eyes we watch time pass in this place where time stands still. A portrait of the daily life of the cemetery allows us to see the intersection between those who make a living there and those who rest there-innocent or guilty. A construction worker hovers over the grave plastering the inside of the cupola while a young widow lights a candle to her recently killed husband. Eventually mourning too becomes work as the widows return day after day to tend to their husbands mausoleums, a perversely gaudy reminder of the violence that is wounding Mexico, and of the socio-economic conditions in which this violence flourishes. A worker covets the luxuries his wages will never afford him as he hangs a chandelier. The women look too young to be widows; the children play hopscotch on tombs the way others play in sandboxes and on jungle gyms. The code of silence makes conversation dangerous. The word 'narco' is forbidden. The teetering scaffolding, the rotting wooden ladder, the photograph of a man who died at 23: life is precarious for everyone with business here. EL VELADOR lingers at the threshold of violence. By refusing to show the graphic images that the press feverishly disseminates Almada asks us to dwell in the moment when violence has just left its mark and when violence is imminent. Her camera enters into the intimate and ordinary routines of this world with patience, restraint and tenderness. EL VELADOR is a film about violence without violence.
(From Ovid.tv's introduction to this film.)

The director in her own words:

"EL VELADOR is an unsettlingly quiet, even lyrical film about a world made and unmade by violence." —A. O. Scott, The New York Times
"Mesmerizing!" —Time Out

Mexican annals: No weapon too dirty or criminal...