Home ABOMINATIONS Exactly 18 Years After US Coup Against Venezuela, Pompeo and Abrams Warn Another is Coming

Exactly 18 Years After US Coup Against Venezuela, Pompeo and Abrams Warn Another is Coming

The Gangsters in Washington have the audacity to announce their crimes to the whole world, such is the putrefaction of the US political system and that of its usual accomplices across the globe. 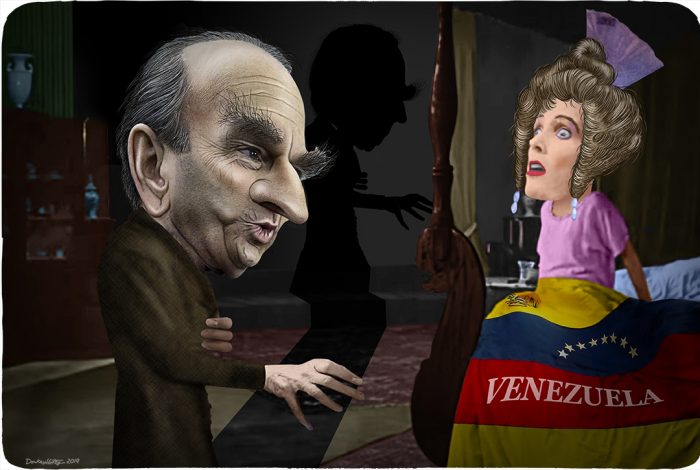 US regime change cheerleaders Mike Pompeo and Elliot Abrams warned Venezuala’s government not to resist the upcoming implementation of a “transitional government.”

[dropcap]O[/dropcap]n the eighteenth anniversary of the U.S.-backed coup against the government of Venezuela, senior American officials announced that the people should prepare for another imminent push. “The goal is to replace [President Nicolas] Maduro’s illegitimate dictatorship with a legitimate transitional government that can hold free and fair elections to represent all Venezuelans. It is time for Maduro to go,” announced Secretary of State Mike Pompeo.

On Saturday the eleventh, exactly 18 years after the U.S. supported a briefly successful coup against Hugo Chavez, American envoy for Venezuela and coup specialist Elliott Abrams warned that if Maduro resisted the implementation of said “transitional government” his departure would be far more “dangerous and abrupt,” effectively threatening him with another assassination attempt, like the one the U.S. tacitly supported in 2018.

The U.S. has recently upped its sanctions against Venezuela and sent warships to the region to enforce a blockade.

The phrase “transitional government” has been used a great deal of late; the White House describing Bolivia’s Añez administration as such. Añez came to power in November thanks to a U.S.-supported coup against President Evo Morales. That “transitional government” has since massacred protestors, pulled Bolivia out of multiple international treaties and indefinitely suspended elections. Thus, it came as no surprise when Maduro rejected the same fate as his ally, Morales. “We will take care of Venezuela,” he replied, “Mr. Abrams, cool your jets.”

Maduro is well aware of the history of U.S. coups in his country, having been part of a counter-demonstration that successfully overturned the April 2002 putsch. Documents obtained under the Freedom of Information Act show that coup leaders at the time traveled back and forth to Washington D.C. several times in the months leading up to the event, where they received counsel and training from American officials. NED and USAID funding for the groups who carried it out quadrupled in 2002 and then quadrupled again in 2003. The U.S. government incontrovertibly knew by at least April 6 that a coup carried out by those they were funding and training was about to occur. But instead of alerting the government, they immediately endorsed events, falsely claiming that President Chavez had massacred his own people and then resigned. 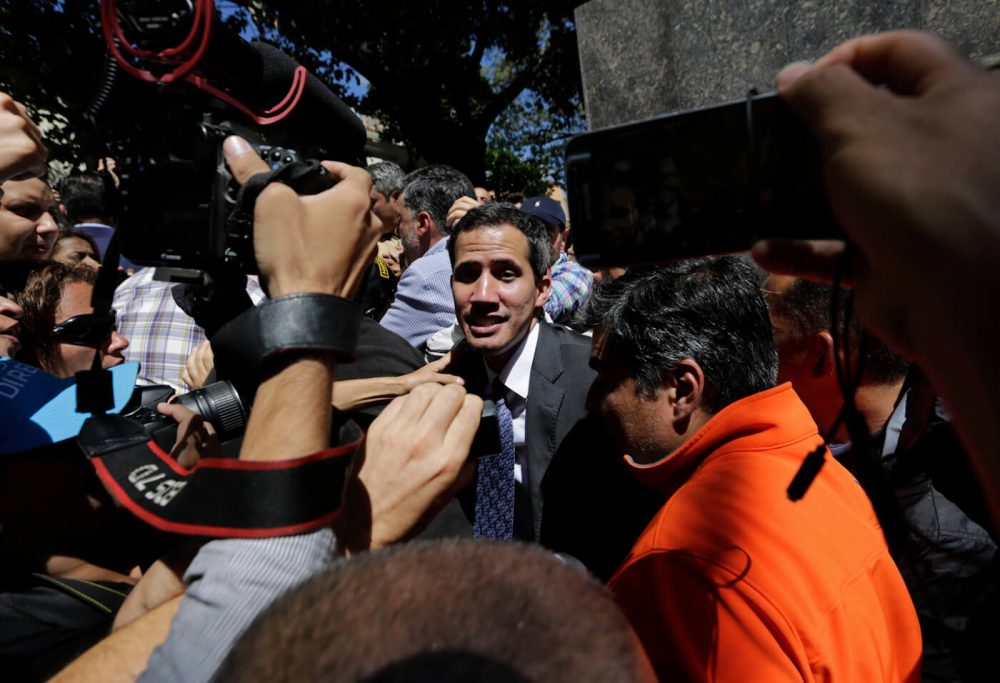 Guaido among supporters. Yes, they exist, densely concentrated in the country's upper class, and many others are literally paid by US agencies working to topple the legitimate government.

Since then, Washington has never stopped attempting to remove the United Socialist Party from power, refusing to accept the validity of widely-lauded presidential elections in 2013 and 2018, funding virtually the entire spectrum of the domestic opposition for two decades. A number of other, less successful coups attempts have all been met with at least tacit American approval as well, including 2014 and 2017 waves of terrorist violence, a failed 2018 assassination of Maduro, and four separate coup attempts last year by self-declared president Juan Guaidó.

The Trump administration has also ramped up Obama’s sanctions on the country, leading to over 100,000 deaths, according to an American U.N. Special Rapporteur who visited the country, describing them as akin to a medieval siege and declaring Trump guilty of crimes against humanity.

Abrams’ life’s work has been to use the power of the U.S. government – overtly and covertly – to overthrow sovereign states through coups, sanctions and genocides. On his first day as Assistant Secretary of State for Human Rights and Humanitarian Affairs under Ronald Reagan in 1981, he jumped into action, covering up the now-infamous El Mozote massacre in El Salvador, conducted by a death squad created, armed and trained by Washington. Since then he has been an architect of “dirty wars,” genocides and regime change in Guatemala, Nicaragua, Colombia and Panama, among others. As Jon Swartz of The Intercept wrote:

The choice of Abrams sends a clear message to Venezuela and the world: The Trump administration intends to brutalize Venezuela, while producing a stream of unctuous rhetoric about America’s love for democracy and human rights.”

When Rep. Ilhan Omar brought up some of this history during a 2019 House Committee on Foreign Relations last year, he appeared outraged, almost beyond words.

Despite the sanctions, the Venezuelan government has actually proven to be far more capable of handling the coronavirus pandemic than the Trump administration. Even before any confirmed cases, Maduro declared a health emergency, canceling foreign flights and prohibiting crowds. On the day of the first case, schools, theaters, and restaurants were closed, and wearing a mask in public became mandatory. The government created a national online database and website where unwell citizens could inform authorities of their condition. Over 20,000 people who registered were immediately visited in their homes by medics. The country has reported only 181 infections and 9 deaths.

While Pompeo and Abrams’ latest remarks are a grave threat to the sovereignty of Venezuela, they are not novel, Venezuelans have been hearing similar proclamations for nearly two decades. Whether they will succeed where previous administrations before them have failed remains to be seen.

Feature photo | Felon Elliott Abrams, left, in cartoon ridiculing his comeback to "government service" to assist in the murdering of Venezuelan democracy, a longstanding objective of US foreign policy.

About the author(s)
Alan MacLeod is a Staff Writer for MintPress News. After completing his PhD in 2017 he published two books: Bad News From Venezuela: Twenty Years of Fake News and Misreporting and Propaganda in the Information Age: Still Manufacturing Consent. He has also contributed to Fairness and Accuracy in Reporting, The Guardian, Salon, The Grayzone, Jacobin Magazine, Common Dreams the American Herald Tribune and The Canary.