Time For UBI is NOW!!! (Annotated) 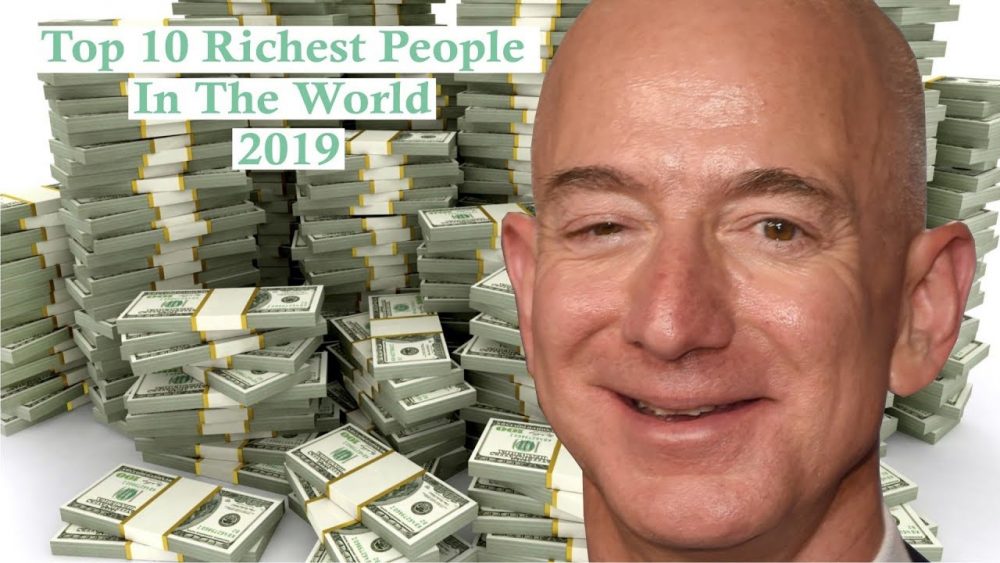 CIA-affiliated Amazon's boss Jeff Bezos literally doubled his fortune in the last 10 years, becoming the richest man on earth (of the visible ones).

A man struggled in the desert heat with his mouth as parched as sandpaper. He was fading fast from lack of the basic essentials to exist, number one  being water. Someone hands him a giant bottle of water and he is so appreciative. He drinks the water, but hours later on his journey through the unforgiving sands, he realizes that the water alone cannot save him.

So it is for all we working stiffs who make up the 99+ % of this empire. Yes, we need this thing referred to as the Universal Basic Income or UBI instituted NOW , and not in six months or for only a brief duration. Touted by former presidential candidate Andrew Yang and articulately endorsed by Public Banking expert attorney Ellen Brown,  it proposes that ALL citizens would receive a $1000monthly  stipend from the government ( Tax Free ). The Spanish government is about to do a similar plan, and keep it going forever if necessary. I say ' necessary' because this upside down New Gilded Age our empire  has become seems to continually give 10X more of OUR tax money to the super rich each time they throw us working stiffs a bone. In all candor, if the UBI is not instituted we will have a worse situation than during our Great Depression of the 1930s or Dickens' London from his novel A Christmas Carol. Furthermore, Ellen Brown, in her interview with this writer, explained how a Universal Basic Income would NOT be inflationary. Thus, it is the quickest way for working stiffs and the unemployed or retired working stiffs, and of course the indigent, to breathe some fresh greenback air... before they start eating up each other... and I don't mean literally.

Economic depressions feed into increased  cases of emotional distress, violent behavior, petty crime, spousal abuse, alcoholism, drug addictions of many types, suicide and streets filled with the homeless ( more than even now ) with more and more ' Lost children' . Yet, through all of this from the ' looking glass ' of past drastic hard times, the Super Rich still live like the kings and queens they are NOT! Those current gated communities and secured high rises will see armed guards patrolling, chauffeurs with automatics and a new industry of domestic mercenaries to work with the local police. It'll happen, and soon, if the money doesn't start funneling down quickly, instead of just the usual way UP. As with my anecdote of the man in the desert, working stiffs need that $1000 bucks each month to go along with  their current salaries ( if lucky enough to still have work ), a  temporary unemployment check or the Social Security check we seniors get. It will not solve this horrific problem, but it will give working stiffs some relief.

Now comes the hard part: When will working stiffs wake up and see the tragic inequality that currently exists between us and that 1/4 of 1 %? The following chart from a few years ago is the best this writer could find as to how GREAT is the polarity in compensation. In the enclosed list of CEO pay, check out the last column on the right. That shows the ratio of CEO pay to the pay of a median employee of each company, not even the lowest paid full time employee, but those who earn in the middle: 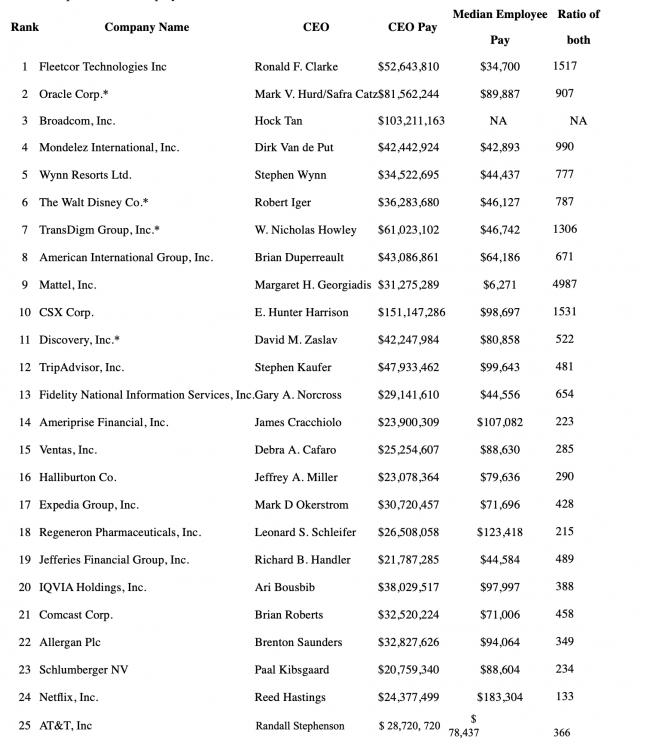 Editor's Note: The are many lists and rankings of "the richest people" found in the business media and leading papers, classified by nationality, industry, etc. The names (and rankings) keep fluctuating a bit due to inevitable changes in positions, retirements, death and other variables. See here, for a roster of richest CEOs, for example, and here, for the richest people in the world.  Keep in mind, again, that these figures are only approximations. Short of a global revolution leaving these people no place to escape, there is no way to find out what their true worth is since they are all experts at hiding their actual wealth, and some boast (like the Saudi royal mafia, which literally own Saudi Arabia) simply unquantifiable riches. Lastly, remember, too, that even these lists are used by the empire's propaganda ministry to defame enemy leaders. Thus in a widely circulated list of "the richest people in the world," we find Vladimir Putin right under Mark Zuckerberg, with a fortune of US 70 billion, implying exorbitant corruption, which is plain absurd and risible. No reliable source is given for this ludicrous assertion, which, like the Russiagate hoax accusations manufactured by the CIA with their innumerable media assets, must be accepted on their say-so. Fact is, if Putin had anything remotely close to that figure he would have been deposed already by the Russian people and his long list of enemies. This blatant lie is itself tacitly denied by other Western business and general press media publishing similar rankings, which do not mention Putin at all. Obviously, any man who is worth $70 billion is not likely to be so easily misplaced by a semi-alert reporter. See the graphic below: 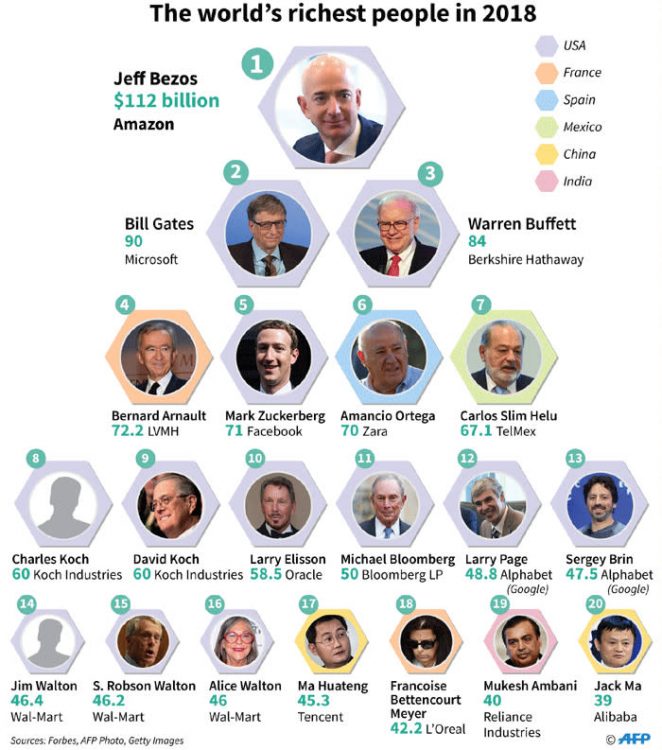 This is NOT a call for revolution, because things of that nature will NEVER occur here in Amerika. Sadly, the only such upheaval would most likely be one of a Neo Fascist element. Look at the appeal that the Trump phenomenon had four years ago and even NOW to understand the mindset of such a right wing cultural shift. No, our nation is still meandering around from the successful 'Dumbing Down' that our educational system has experienced for over 40 or 50 years—or much longer perhaps. The Super Rich achieved so much from the time of Reagan right up to now, and they started from a privileged position.  They say, from the Left thinkers I admire, that politics does not get things done; only mass movements in the streets can cause change. Well, how about both actions working together? A) A shift away, finally, from both phony political parties into a new and viable 3rd party for we socialists/progressives; B) Outside the offices of our elected officials and on the street corners we need  NON Violent demonstrations, demanding a UBI NOW, repeated weekly for as long as it takes to wake up our sleeping politicians and neighbors. Plus, writers and public figures who support UBI  should get on any such airwaves as possible to continually educate others on what needs be done. This will be, once the current pandemic ceases a bit, a time for action to level the playing fields of our economy. WE working stiffs are, in reality, in this together... whether some out there like it or not!!