Shocking! There's rampant corruption in the bosom of the Democrat party!

“Do You See What Happens, Larry?”

By David Sirota, at his “Too Much Information”
Biden signs up Larry Summers, after Summers destroyed the world and now wages a campaign against a wealth tax and against worker power.
Joe Biden infamously promised his big donors that if elected, “nothing would fundamentally change” for them. The news that Biden is being advised by Larry Summers suggests the presumptive Democratic nominee is dead serious about fulfilling that campaign promise.
Summers was the architect of major corporate trade policies that ended up offshoring America’s manufacturing capacity -- a development that left the United States in the unenviable position of begging China’s authoritarian regime to help produce the basic goods we need during the coronavirus emergency. Summers also sculpted Wall Street deregulation and was billed as one of three members of a “committee to save the world” -- a committee that ended up destroying the world when its bank-coddling policies culminated in the financial crisis.
That didn’t stop Summers -- he took a lucrative trip through the revolving door into a reportedly part-time job at a hedge fund that netted him $5 million. After that, he went back into government and fought against proposals to protect homeowners and crack down on the financial industry that had destroyed the global economy. He was also terrible on climate change.
If Walter Sobchack was around, he’d angrily ask: do you see what happens, Larry? Do you see what happens when you screw over millions of people?
And Summers’ answer would likely be no -- he doesn’t see. He doesn’t see because no matter how many things he ruins, no matter how much pain his policies inflict, he continues to be rewarded -- this time by the Democratic nominee for president. He hasn’t renounced any of his past mistakes. In fact, during a recent speech attacking proponents of a wealth tax, Summers showed he is still the same power-worshiping ideologue -- and willfully ignorant of the oligarchic forces that own American politics.
And apparently, that’s somehow all fine and good at the highest reaches of the Democratic Party.
Summers Pretends He Has Never Heard of The Kochs 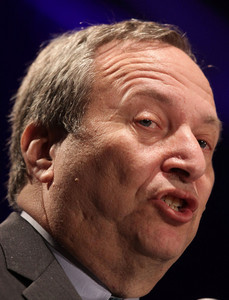 The unsinkable Larry Summers, a key consigliere in the plutocratic mafia that runs America.