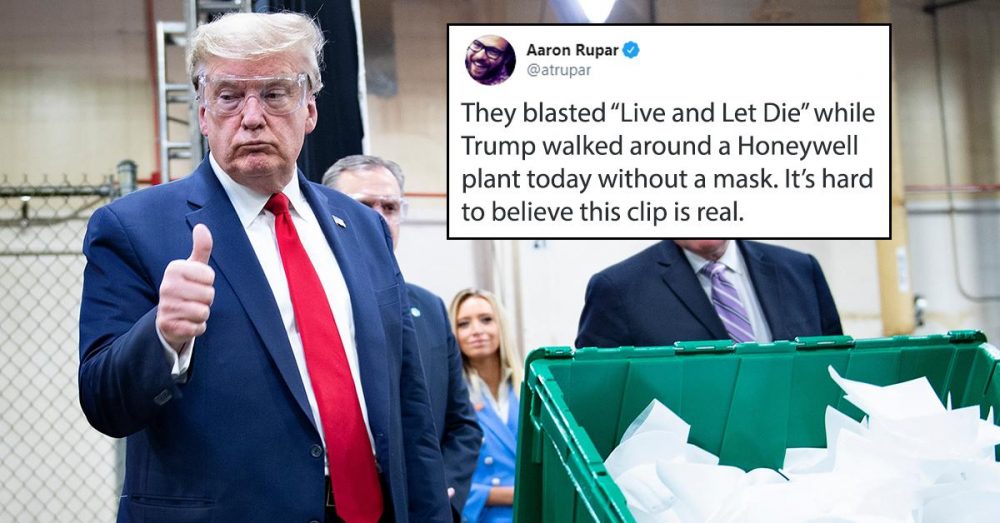 Trump visits a mask factory, wile NOT wearing a mask. (Via Getty Images)

At the start of the day on May 2nd, the U.S. had 4.2% of the world’s population and 33.3%, or one-third, of all coronavirus-19 cases.
At the start of the day on May 10th, the U.S. had 32.9% of cases. The decline from 33.3% to 32.9% is .4% down, or a decline of slightly over 1% of the 33.9%, in 8 days. It’s virtually certain never to go down to the 4.2% of global coronavirus cases which would match America’s 4.2% of the global population.
America will therefore probably, for a long time to come, have a larger number of coronavirus-19 cases than any other country. America has, furthermore, been adding new cases at around 20 to 30 thousand per day since around April 1st and therefore still continues rising, but as the virus spreads and takes hold in more and more countries, America’s percentage of the global total is probably now declining, from the peak of one-third (33.3%), which it had reached on May 2nd.
The libertarian Mises Institute headlined on May 7th, “How Many Lives Will Politicians Sacrifice in the Name of Fighting COVID-19?” and argued for do-nothing governmental policy, and for relaxation of the “lockdowns” that are in place. Mike Whitney at the libertarian Unz Review  headlined on May 4th, “Sweden Is the Model” and wrote that “Herd immunity is the only path that is currently available.” This means there should be no “lockdowns.” He asserted that “After 6 weeks of this nonsense, many people are getting fed-up and demanding that the lockdowns be ended”:
As we said in last week’s column, the lockdowns must be lifted gradually, that is crucial.
“You have to step down the ladder one rung at a time”, says Senior Swedish epidemiologist and former Chief Scientist of the European Center for Disease Prevention and Control, Johan Giesecke. In other words, slowly ease up on the restrictions and gradually allow people to get back to work. That is the best way forward.
Sweden has, indeed, taken a remarkably libertarian approach to dealing with Covid-19. As I wrote on April 22nd under the headline “Why Post-Coronavirus America Will Have Massive Poverty”, comparing Sweden’s policies versus the more socialistic Denmark’s policies on this:
The daily number of Denmark’s new Covid-19 cases peaked on April 7th, and has been declining since that time. Its neighbor Sweden peaked on April 8th. Sweden’s emergency legislation is less strict about lockdowns, but relies more on individual discretion. However, since Sweden, like Denmark, is a democratic socialist country, individuals needn’t worry about paying medical bills, nor about being paid while on sick-leave. So, employees aren’t desperate to return to their places of work, such as in America; and, therefore, these countries don’t spread the infection as readily as in the U.S. and are thus far less likely to have recurring peaks and delayed terminations of the coronavirus crisis. (By contrast: in America, where losing one’s job can mean losing one’s health care, even sick employees may be inclined to stay on the job and perhaps infect customers.) And there are no corporate bailouts in either Denmark’s or Sweden’s legislation. Denmark’s Finance Minister, the Social Democrat (or democratic socialist) Nicolai Wammen was interviewed for 15 minutes on March 27th, by Christiane Amanpour, and he explained Denmark’s emergency law, which was overwhelmingly bottom-up, not top-down (such as America’s is).
Here, therefore, is the actual performance [number of cases per million population], thus far, of both of those two countries:
DENMARK = 1,329 peaked April 7th
SWEDEN = 1,517 peaked April 8th

Puke if you must (you probably should)