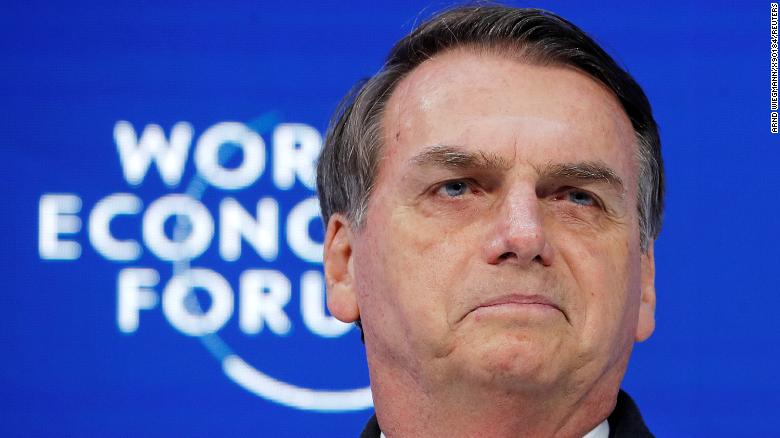 Brazil's neocon-fascist  Jair Bolsonaro. Delivering the country to Washington on a platter. What comprador elites have done for more than a century.

[dropcap]W[/dropcap]hile most countries across the world implemented measures to curb the spread of the coronavirus pandemic, Brazil’s President Jair Bolsonaro dismissed concerns of the spread and refused to consider measures to safeguard the population. So far Brazil has registered53,000 cases and over 3,600 people have died from the virus. Scientists believe the spread in Brazil has reached over 1 million people.

In retaliation for suggesting health measures to avoid the pandemic spreading, Bolsonaro fired Health Minister Luis Henrique Mandetta and replaced him with Nelson Teich, whose views are closer to Bolsonaro in terms of prioritising economics over health. Away from the humanitarian concerns which the Brazilian people are now facing, Bolsonaro is strengthening military ties with the U.S., building upon U.S. President Donald Trump’s designation of Brazil as a non-NATO ally in 2019. With the same period, NATO’s Secretary General Jens Stoltenberg had spoken about having more partners from Latin America for the alliance. So far, Colombia is the only Latin American country designated as a NATO global partner.

In March this year, Brazil and the U.S. signed a military agreement which would facilitate U.S. influence in the region. The agreement on research, development, testing and evaluation, known as RDT&E, was signed by Brazil’s Ministry of Defence and the U.S. Southern Command (SOUTHCOM), forming the foundations for further military cooperation between both countries. SOUTHCOM is responsible for U.S. military operations in the region.

Latin America is once again experiencing the surge of right-wing governments and military dictatorships. The Venezuelan government faces continuous U.S. aggression in a bid to eliminate the socialist project implemented by Hugo Chavez. In Bolivia, the U.S. supported a right-wing military coup which ousted President Evo Morales and targeted indigenous populations in the aftermath. Mere days prior to his trip to SOUTHCOM in Miami, Bolsonaro endorsed protests which called for the restoration of military dictatorship in Brazil.

SOUTHCOM was recently reportedly involved in an operation targeting drug traffickers in Venezuela as part of a political scheming that would shift attention away from the U.S.’s delays at implementing restrictive measures to curb the virus spread. Ostensibly to portray the Venezuelan government as inept at handling emergency medical situations, the U.S. used the plan, which was not to be implemented before May, to allegedly counter the “many criminal organisations [that] are attempting to capitalise on the crisis.”

The U.S. is also competing with China for regional influence, hence the Brazil-U.S. agreement is perceived as a potential deterrent. In November, the Brazilian parliament announced it would allow the U.S. to launch technology from the Alcantara launch Centre.

During the visit to SOUTHCOM, Navy Admiral Craig Faller spoke of Brazil in terms of the historical ties that both countries share. “Brazil is one of our strongest democratic partners in the hemisphere. We value our longstanding partnership with Brazil’s armed forces, and we look forward to taking new and important steps to expand our military cooperation.”

The U.S. may now speak of an allegedly democratic government in terms of elections. However,  Bolsonaro’s intent to replicate the 1964 dictatorship under democratic guise, as well as the U.S.-Brazilian efforts to interfere in Venezuela, speak of a repetition of history. With Venezuela part of the U.S. military agenda, in collaboration with allies Colombia and Brazil, Bolsonaro has facilitated U.S. infiltration in the region and adopted the role of a country that has turned away from the regional unity which fuelled the quest for social change in Latin America. Now in the role of one of the U.S.’s major allies in the region, Bolsonaro will be able to take actions which leave the rhetorical glorification of military dictatorships in the background, given the opportunity to collaborate as an equal against his Latin American counterparts.

Ramona Wadi is an independent researcher, freelance journalist, book reviewer and blogger. Her writing covers a range of themes in relation to Palestine, Chile and Latin America.

Stirrings of “#DemExit” among Bernie followers—Is a third party possible?