by Sarah Lahm • The Progressive
ALL PHOTOS BY THE AUTHOR

Ending in clashes between armed cops and angry community members, the protest showed the immensity of residents’ distrust of police. 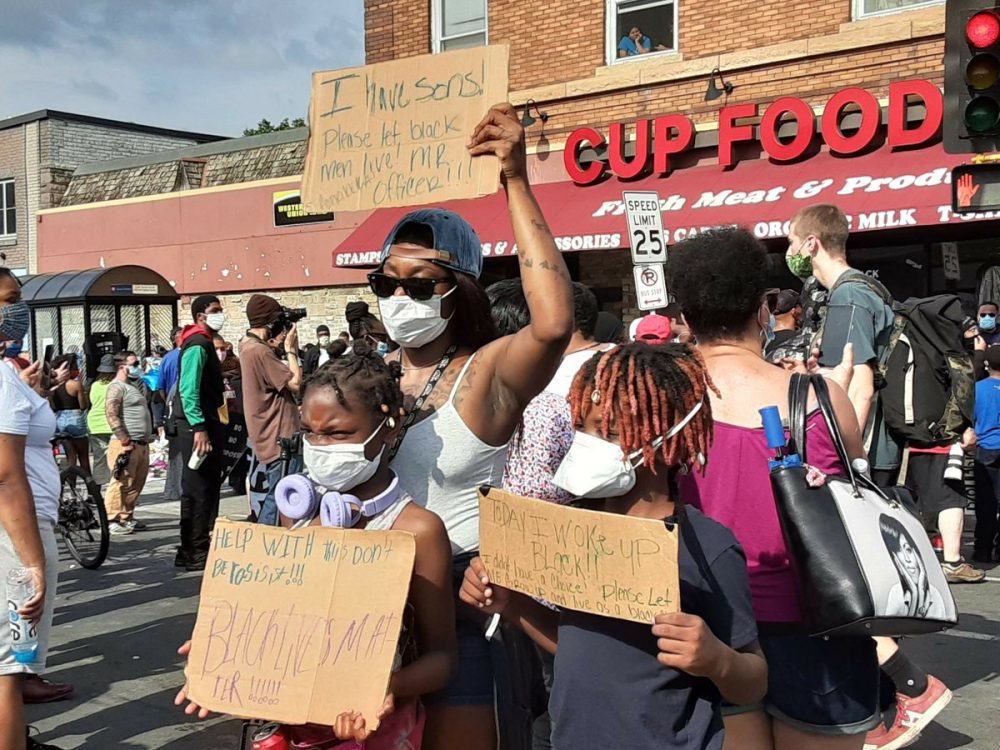 Thousands of protesters—most wearing face masks due to COVID-19—marched through the streets of South Minneapolis, Minnesota, on May 26, one day after a black man, George Floyd, was killed while being held down by one of the city’s white police officers during an arrest.

Protesters crowded the streets in front of a convenience store where Floyd was arrested for allegedly attempting to use a fake $20 bill. He was then pinned to the ground by a seemingly impassive police officer while three others stood nearby, observing but not intervening.

Protesters gathered at the street corner where Floyd had been arrested and held on the ground as the officer, Derek Chauvin, kept his knee planted on Floyd’s neck for at least five minutes. In a video of the arrest that has been shared widely on social media, Floyd is clearly distressed, telling the arresting officer, before he loses consciousness, that he can’t breathe and is in pain.

Floyd died shortly after being taken to a local hospital, sparking outrage in the city of Minneapolis and across the country. His cries for help, particularly “I can’t breathe,” reverberated immediately, drawing a direct parallel to Eric Garner and other recent victims of officer-involved killings.

The Twin Cities has had two other high-profile incidents in recent years, with two black men—Jamar Clark in 2015 and Philando Castile in 2016—both killed by police officers while being arrested.

All of these names were on the minds, and the signs, of protesters who crowded the streets in front of a convenience store where Floyd was arrested for allegedly attempting to use a fake $20 bill. He was then pinned to the ground by a seemingly impassive police officer while three others stood nearby, observing but not intervening. 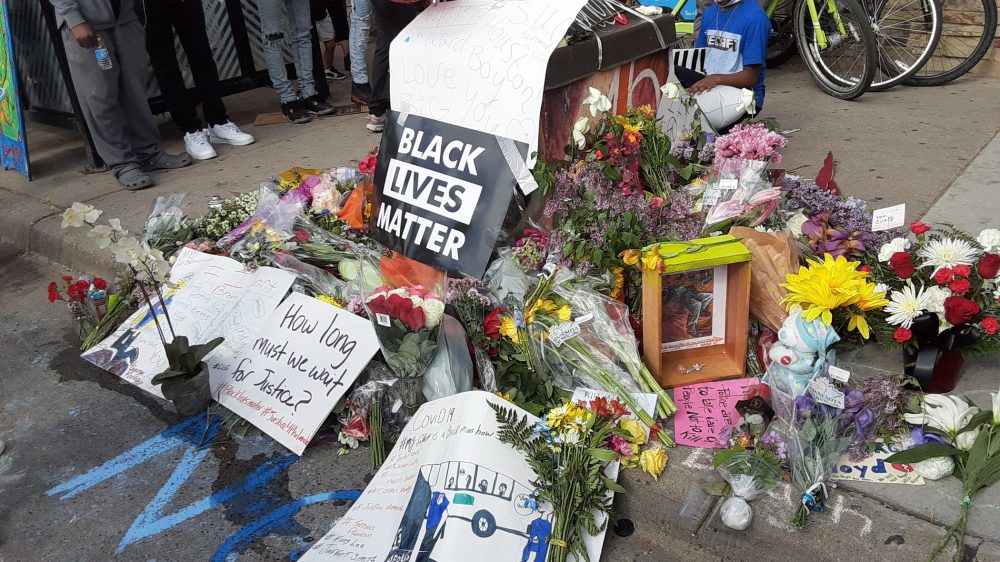 These actions by the police in fact led to their firing earlier in the day on May 26, just hours after Floyd died. The four Minneapolis police officers were removed from the force by Chief Medaria Arradondo, in part because they did not follow the department’s own training protocols.

In 2016, the Minneapolis police department announced that all officers would be trained in de-escalation tactics as a means to avoid unnecessary violence or death, and as a way to try and build trust with communities of color, according to local news reports.

Similarly, changes enacted in 2016 require Minneapolis officers to intervene when they witness another officer using excessive force. That didn’t appear to happen during George Floyd’s arrest, giving Arradondo cause to fire the officers.

Minneapolis Mayor Jacob Frey swiftly condemned the officers’ actions, referring to them in an emotional May 26 interview on Facebook Live as “blatantly wrong and malicious,” and saying on Twitter that he supported Chief Arradondo’s decision to remove them from the police force.

Shouts of “murderer” repeatedly cut through the air, along with an insistence that any white people in attendance should “stay on the front lines” of the struggle for racial justice.

Although the officers’ firings were celebrated at the May 26 protest, and taken as a sign of progress, many in the crowd demanded that Chauvin, the officer who kneeled on Floyd’s neck, also be indicted on murder charges.

In a May 27 press conference, Frey took the unusual step of calling for Chauvin to be arrested by county prosecutors for his role in Floyd’s death.

At the protest, tensions bubbled up between some older civil rights activists who praised the officers’ removal and cautioned that the pursuit of justice would take further patience, and a handful of enraged young people, one of whom persistently accused the officers involved of murdering Floyd.

Shouts of “murderer” repeatedly cut through the air, along with an insistence that any white people in attendance should “stay on the front lines” of the struggle for racial justice. Before long, the restless crowd began marching east, heading toward the Minneapolis Third Precinct police building, located more than two miles away.

Soon, everyone from babies in strollers to grandmothers in wheelchairs filled the streets, shutting down traffic and taking over Hiawatha Avenue near downtown. Neighborhood residents stood by on their front lawns, many with fists or Black Lives Matter signs raised in solidarity, while passing motorists honked in support.

Floyd’s name was repeatedly evoked, along with chants of “No Justice, No Peace! Prosecute the Police!”

At one point, a police cruiser standing guard was surrounded by a small group of protesters, some of whom hurled plastic water bottles at the car and shouted in anger.

This occurred just blocks before the police precinct and offered a foreshadowing of the confrontation between police and protesters that ultimately took place as the protest morphed into a violent clash later that evening.

As the crowd blocked traffic and occupied the streets in front of the precinct building, a slow and steady rain began to fall. The police remained silent inside the building at first, as some protesters began throwing rocks at the building and spray painting anti-police sentiments along one wall.

Eventually, the police inside donned riot gear and dispersed the crowd with clouds of tear gas. It seems very clear now that the trust between police and the community that was supposed to have been built after the 2016 policy changes—which the officers involved in Floyd’s arrest appear to have ignored—has been shattered once again, if it ever existed at all.

Sarah Lahm is a Minneapolis-based writer and researcher. Her work has appeared in outlets such as The Progressive, where she writes the Midwest Dispatch column and contributes pieces to the Public School Shakedown site.

Why the West is so focused on Hong Kong