Why the West is so focused on Hong Kong

OpEds
There are many places around the world where people suffer from extreme poverty, human rights abuses and unimaginable hardships.

Hong Kong is not one of them. Yet, the Western world, its politicians and media, choose to focus on our every development, setback and struggle, and claim “to stand with Hong Kong people”. If that’s not cringeworthy, I don’t know what is.

Let me put this out as a political axiom: China wants Hong Kong to succeed and prosper more than any other country. Why? Because it is part of China.

If some Hong Kong people have other ideas about the future of the city, that’s for them and the mainland to work out, and no one else. All these seem to me elementary and axiomatic. Unfortunately, it is not so for many people. My bad!

But why the intense interest of the West, especially the United States? Because we have entered into an epochal struggle for supremacy between China and the US. Hong Kong people, with no sense of history and tragedy, have naively let themselves be dragged into this geopolitical vortex from which there is no escape.

That suits some Western governments fine. Most Westerners are genuine well-wishers but naturally, they can’t see beyond their own world view or commit to values other than their own, which some claim are “universal”.
With the US, a modern-day global empire, though, it gets a lot more complicated. China is the only country that poses as a possible rival. Imagine what it would be like if Beijing had full control of Hong Kong, Taiwan, and the more restive provinces within the country.

Such a “unified” China would be a truly awesome opponent. That is the last thing the US wants.

BELOW: The fruits of US duplicitous hybrid warfare in Hong Kong, with HK residents wrapping themselves in the US flag, naively thinking it represents freedom and equality, not to mention true democracy.

Hong Kong could have had “one person, one vote” by now, albeit with some significant constraints, but also with the promise of gradual improvement. But we wanted all or nothing back in 2015.

Now, we have worse than nothing; we will have unending strife. That is the context within which Beijing has decided to intervene, in the most peaceful and lawful way possible that also complies with the Basic Law and the Sino-British Joint Declaration.
Nothing short of becoming a Western-style liberal democracy – “real democracy”, they call it – for Hong Kong would satisfy some locals. I respect that, though I don’t share it. That struggle has become the ruin of Hong Kong.

Alex Lo has been a Post columnist since 2012, covering major issues affecting Hong Kong and the rest of China. A journalist for 25 years, he has worked for various publications in Hong Kong and Toronto as a news reporter and editor. He has also lectured in journalism at the University of Hong Kong. 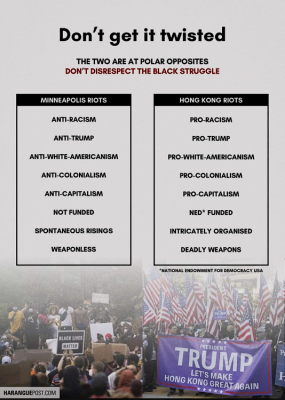