Freedom Rider: Biden and the Low Point of Black Politics

Print this post.
HELP ENLIGHTEN YOUR FELLOWS. BE SURE TO PASS THIS ON. SURVIVAL DEPENDS ON IT.
Margaret Kimberley, BAR senior columnist 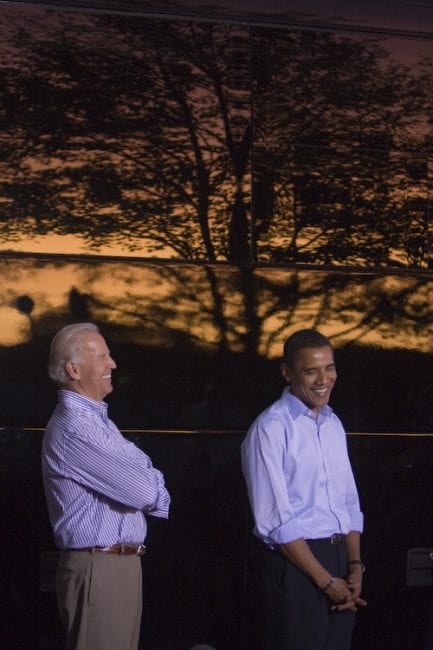 Biden with his former boss.  Enjoying the fruits of power, and doing worse than nothing with it.

Freedom Rider: Biden and the Low Point of Black Politics
Black folks perform phenomenal feats of mental gymnastics and self-delusion to convince themselves that Joe Biden is on their side.

“There is a strange magical thinking afoot that equates acknowledgement of Biden’s faults with support of Trump.”

Joe Biden was always an intellectual light weight and he always had poor impulse control. He was always in the conservative wing of the Democratic Party. Now he believes the hype of the black misleadership class charlatans who make his case by claiming that he has some sort of special relationship with black people. The combination of all these attributes makes his presidential campaign one long train wreck.

A recent interview on the Breakfast Club  radio program was the occasion of his latest bizarre statement. This time he famously said, “... if you have a problem figuring out whether you're for me or Trump, then you ain't black." He seemed to think that being overly familiar and using bad grammar gave him some sort of credibility.

Symone Sanders, his most prominent black campaign staffer, was left to clean up after him yet again and defend his stupidity by saying that he spoke in jest. The damage was bad enough that Biden had to apologize himself and said that he shouldn’t have been “a wise guy.”

“Biden believes he has some sort of special relationship with black people.”

Biden is like Donald Trump, in that he is thoroughly unqualified to be president. Yet black people are desperate to see anyone other than Trump in the White House and that is how the party establishment got away with foisting him upon them. When they aren’t trying to minimize his shortcomings, they admonish anyone who points them out. “But he’s better than Trump!” is their rallying cry lest anyone think for themselves and point out the many reasons why Biden is so problematic.

Any words of doubt or well deserved humor are frowned upon and even attacked. There is a strange magical thinking afoot that equates acknowledgement of Biden’s faults with support of Trump. A joke at his expense can lead to foolish argument. The Democratic Party propagandists and their friends in the black misleadership class are to blame for this sad state of affairs.

Allegiance and subservience to their donor class requires them to lie to the party rank and file. Their scam depends upon convincing voters that they work on their behalf when they do nothing of the sort. They had to explain away Hillary Clinton’s defeat with tales of Russian intrigue and blame directed at the left. Trump’s awfulness makes him the perfect foil. They can pretend to oppose him with an impeachment charade which satisfies their base but when he proposes a space force or $700 billion in defense spending they go right along with whatever he wants.

“When they aren’t trying to minimize Biden’s shortcomings, they admonish anyone who points them out.” 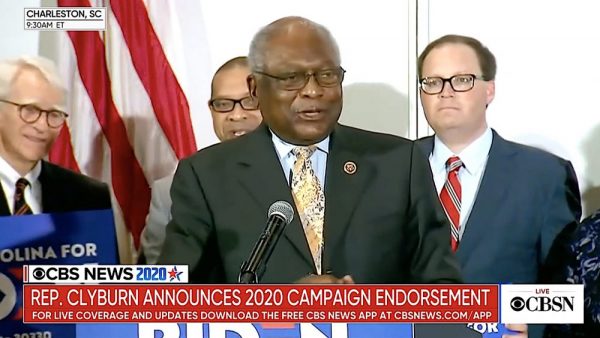 Georgia's Rep. Clyburn is one of many Black misleaders in the US Congress. Opportunistic parasites doing the bidding of the white establishment, which injues also the working class at large.

Black America’s political hopes now consist solely of getting rid of Trump. There appear to be no other topics of interest or importance. A Trumpless presidency is seen as the fulfillment of every need. Apparently low wage work, homelessness, and mass incarceration will disappear if Biden wins. However, the truth is even worse. The Biden dead enders know that he won’t make these problems disappear but they are tacitly admitting that they have shrunk their politics down to a microscopic size.

This negation of need is no accident. The end of black politics was a long time coming. They sealed the deal with a black president who embodied nothing that black people needed but his presence kept any doubt at bay. Now after years of acquiescence to disastrous neo-liberal policies the only thing that appears to matter is Trump’s defeat.

This con job requires feats of mental gymnastics and self-delusion. But the traitorous misleaders have done their jobs well. Smart people who ought to know better ignore Biden’s history of racist policy making without complaint while simultaneously claiming not to notice his ill health and obvious stupidity.

“A Trumpless presidency is seen as the fulfillment of every need.”

Biden’s chances of winning depend on the Democratic party doing two things they failed to do in 2016. They must protect against vote suppression and theft and carry out a strong voter outreach effort in key states. Of course the question assumes they really want to win at all. They achieved victory with the Bernie Sanders capitulation and are willing to give Trump another term. The Biden choice makes clear that hand wringing about Trump is phony. They support his defense spending, sanctions, tax cuts and China bashing. They may be embarrassed about moronic tweets and Nancy Pelosi may call him fat. But in the end they have the same interests and they see no need to change horses in mid- stream. Protecting black peoples’ votes isn’t on their agenda.

The charade will go on for five more months. Trump will incite his MAGA crowd and frighten black people while the party that is supposed to work in their interests does nothing. The misleaders will be reelected and the people will have nothing to show for their loyalty to scoundrels.

Laughing at Biden’s expense won’t cause him to lose. Those who are easily fooled will be angry and the cynics who created this mess will never own up to their wrong doing. By all means go ahead and laugh at the latest Biden disaster. There is no need to deprive oneself of fun while the scoundrels create debacle 2.0.

NOTE  : ALL CAPTIONS AND PULL QUOTES BY THE EDITORS, NOT THE AUTHORS
Liked it? Take a second to support Patrice de Bergeracpas on Patreon!