Home AMERICAN PARTY DUOPOLY Riots in Covid-19 era are the ‘language of the unheard’, looted bare by white elite

Riots in Covid-19 era are the ‘language of the unheard’, looted bare by white elite

May 31, 2020
Please make sure these dispatches reach as many readers as possible. Share with kin, friends and workmates and ask them to do likewise. 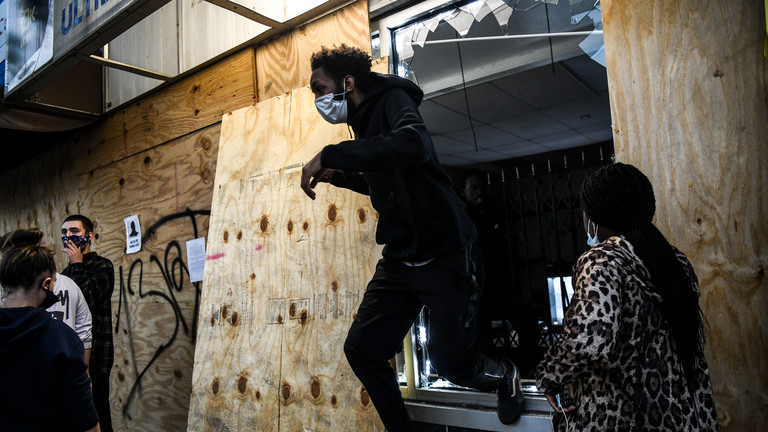 The official caption reads: "A protestor jumps out of a window of a convenience store as it is looted during a demonstration in Minneapolis, Minnesota, on May 29, 2020." No one knows for sure if these perfectly understandable spontaneous acts of revolt and protest are being encouraged by agents provocateurs whose motives and sponsors, as usual, remain cloudy.  Some observers see the hand of anti-Trump forces, which, having failed with Russiagate, are now intent on using the protests to entrap Trump into an impeachable over-reaction.  (RT.com)

The massive scale of the protests sparked by the police killing of a black man in Minneapolis bares the roots of American discrimination – economic woe and ‘legal’ ruling-class looting, multiplied amid the Covid-19 pandemic.

The killing of 46-year-old black man George Floyd by a white police officer in Minneapolis has sparked a wave of violent protests rooted in something bigger than one more terrible incident of racist police brutality.

There is nothing new, sadly, about mass black protests in the wake of a white police officer killing an unarmed black man in the 21st Century United States. Mass marches and confrontations with police and (in some cases) the National Guard followed the ‘police-involved killings’ of Eric Garner (New York City in July 2014), Mike Brown (in Ferguson, Missouri in August 2014), Walter Lamar Scott (North Charleston, South Carolina in April 2015), Freddie Gray (Baltimore in April 2015), Philando Castille (Falcon Heights, Minnesota in July 2016), and Keith Lamont Scott (Charlotte, North Carolina in September 2016).

Familiar unrest on a massive scale

With the killing of Floyd, however, the response has gone beyond the usual ‘Black Lives Matter’ speeches, marches, and confrontations. Minneapolis has experienced four days and nights of civil disturbance, with over 100 buildings damaged or looted. The unrest has included popular break-ins to appropriate life necessities and other goods from corporate retail outlets (“looting”), and arson, including the remarkable burning down of the Minneapolis police precinct that was home base for the four cops complicit in Floyd’s death.

The city’s white mayor has been compelled to apologize for the killing, and Minnesota’s governor has acknowledged “institutional racism” even while deploying the National Guard to squelch the rebellion.

Donald Trump has used social media to threaten state-sanctioned mass murder by tweeting that “when the looting starts, the shooting starts” – a comment Twitter flagged for “glorifying violence.” Trump’s phrase is taken from southern segregationists cracking down on black protests since the 1960s,

As nobody in the mainstream US media wants to admit, looting is a regular and highly organized ruling-class activity in the US. The recent bipartisan $2.2 trillion coronavirus pandemic corporate bailout (passed with only a pittance of relief for the nation’s working-class majority) is just the latest example. “How much,”left activist Doug Selwyn writes me, “have the rich looted, that is, stolen through tax giveaways and bailouts... trillions... with no real protest?” (None, at least since the Obama administration and Democratic-run city governments moved to repress the Occupy Wall Street movement in the fall of 2011.)

The “Say His Name, George Floyd” rebellion has spread from Phoenix to Columbus, Denver, Memphis, Los Angeles and other US cities, with thousands converging in city centers and marching on state capitols. Gunfire has broken out in numerous cities, including Louisville, where crowds rose up against the fatal police shooting of 26-year-old black woman Breonna Taylor. In downtown Columbus, protesters occupied major arteries, broke Ohio statehouse windows, shattered retail storefronts, and broke into the DGX store, a subsidiary of Dollar General.

Ultimately, the protests reached the capital, where tear gas was sprayed at protesters outside a locked-down White House.

Why the special and prolonged intensity of civil unrest after George Floyd’s death? Some of the property destruction has been initiated by white Americans of different ideological stripes – including, some allege, a St. Paul police officer functioning as an agent provocateur by smashing the windows of an AutoZone outlet. Right-wing white nationalists and neofascists may be actively seeking to spark the “race war” that they have long been advocating. Left-wing anarchists and antifascists may be seizing an opportunity to spark chaos and rebellion.

ALSO ON RT.COM White people should acknowledge they DO have privilege & life IS easier for them. Only then world’s racial wounds can be healed

Still, it stands to reason that a significant number of black Americans would engage in serious civil unrest.

The Floyd killing, with a white police officer kneeling on his victim’s neck for eight minutes, is hauntingly reminiscent of the NYPD’s infamous, nationally scandalous killing of Eric Garner. Like Garner, Floyd was a middle-aged man charged with a nonviolent offense who pleaded “I can’t breathe” while being asphyxiated by a vicious white officer in a senseless assault caught on video.

Looting of retail stores is about economic desperation, as well as civil and human rights. Covid-19, and the economic depression that the coronavirus has sparked in the US, has hit already deeply impoverished and highly segregated black communities with special and tragic virulence. The median black household net worth is $17,600, compared with $171,000 for white households. The national black unemployment and poverty rates have long been at least twice as high as the white rates. As the real US employment reaches 20% or higher, one can be sure that the joblessness measure in the nation’s black ghettoes is much higher than that. And black Americans with jobs are disproportionately concentrated in low-wage occupations without health insurance – no small problem as Covid-19 wreaks special havoc in their neighborhoods.

It doesn’t help that the nation’s top job, the US presidency, is held this time around by a longstanding racist – a neofascistic white-nationalist who has called for the nation’s predominantly white police to “get tough” when dealing with urban communities of color. “Get tough” is code for beat, maim, and kill.

Martin Luther King, Jr.’s 1966 reflections on the race riots of the mid-1960s apply well to the “Say His Name” uprising of 2020. “A riot,”King said, “is the language of the unheard… America has failed to hear… [that] the economic plight of the Negro poor has worsened over the last few years.”

Do black rioters and looters in the streets (understood so differently from Trump and other looters in the suites) disrespect the law, as their white critics charge? Yes, King said on national Canadian radio in 1967, adding that rioters’ transgressions were “derivative crimes… born of the greater crimes of the… policy-makers of the white society,” who “created discrimination… created slums [and] perpetuate unemployment, ignorance, and poverty… The white man,”King elaborated, “does not abide by law in the ghetto. Day in and day out he violates welfare laws to deprive the poor of their meager allotments; he flagrantly violates building codes and regulations; his police make a mockery of law; he violates laws on equal employment and education and the provision of public services. The slums are a handiwork of a vicious system of the white society.”

Did the rioters engage in violence? Yes, King said in 1967, noting that their aggression was “to a startling degree… focused against property rather than against people.” King observed that “property represents the white power structure, which [the rioters] were [understandably] attacking and trying to destroy.”Against those who held property “sacred,” King argued that “Property is intended to serve life, and no matter how much we surround with rights and respect, it has no personal being.”

Americans who reflexively condemn the “looting” and property violence on display in Minneapolis, Columbus, and elsewhere would do well to reflect on Dr. King’s judgement more than half a century later. The destruction of a window or building and the appropriation without purchase of household goods are minor crimes compared to the killing of human beings and the penning up of millions of people of color in ghettos and prisons where poverty, joblessness, and ill-health are rife, and where a deadly pandemic spreads disease and economic misery with extraordinary ferocity.

“The robbery we should concern ourselves with,”writes William C. Anderson, “is the theft perpetrated by a system that creates desperation where people in need have to go and take for themselves what should be a guaranteed right.”

Property is not more important than black life. Neither is the law.

Paul Street is the author of numerous books, including They Rule: The 1% v. Democracy (Routledge, 2014) and The Empire's New Clothes: Barack Obama in the Real World of Power (Routledge, 2011).

Chilean people ready to return to the struggle: ” Let’s Make Chile Stand Up Against Hunger and Misery”