Home ABOMINATIONS Begun The Civil Wars Of 2020 Have

Two days ago a policeman in Minnesota, who was well known for his brutality, murdered a black man, George Floyd, by suffocating him during an arrest for allegedly paying with a fake $20 bill. (video, longer version) It was one of many such murders.

Millions of people have seen the video of George Floyd struggling to breathe while pinned to the ground by a Minneapolis Police Officer. But what happened in the minutes leading up to the deadly arrest?@_esaliba got security footage to help piece together what happened. pic.twitter.com/fyy54lQZNU

Yesterday afternoon the regime sent in its provocateurs. One of allegedly six was a white man in black clothes, masked with a professional gas mask and carrying a black umbrella. He was filmed as he started to smash shop windows even while protesters told him not do do that. (video). When people got suspicious of him the man walked away, his umbrella still up. (video). He was later identified as a member of the St. Paul police department.

Into the night the protests grew and took on a socialist tone when people started to communalize the goods offered at a local Target market  known for its extensive surveillance. Later the local McDonald's restaurant was also liberated by fire.

The regime gave up. Police fled from the 3rd Precinct in a large convoy (video, video). Soon after that the precinct was set on fire. (video)

These are not race riots. Many of the protesters are young people of white color. (video, video)

Throughout the night more buildings were set on fire. 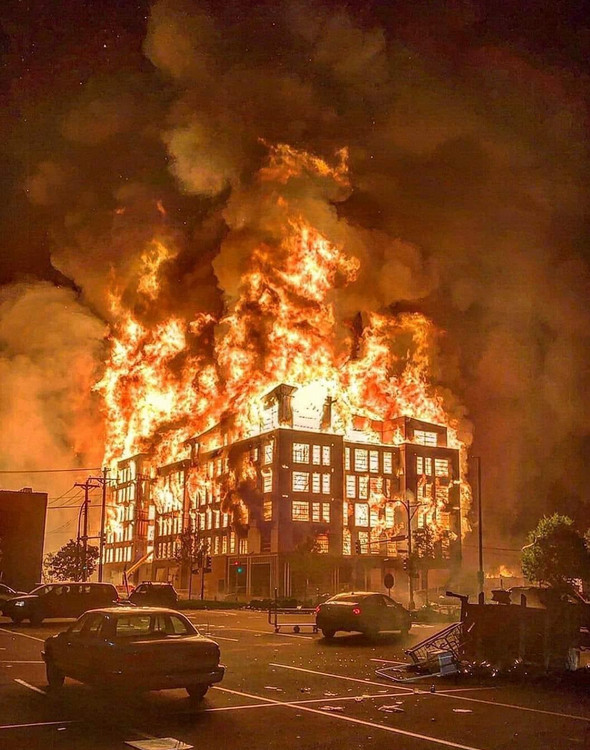 The local regime governor order his national guard to intervene.

The president threatened to kill the unarmed protesters:

...These THUGS are dishonoring the memory of George Floyd, and I won’t let that happen. Just spoke to Governor Tim Walz and told him that the Military is with him all the way. Any difficulty and we will assume control but, when the looting starts, the shooting starts. Thank you!

“When the looting starts, the shooting starts,” is a threat coined by Miami Police Chief Walter Headley, who promised violent reprisals on black protesters in 1967. He also said: “We don’t mind being accused of police brutality. They haven’t seen anything yet.” 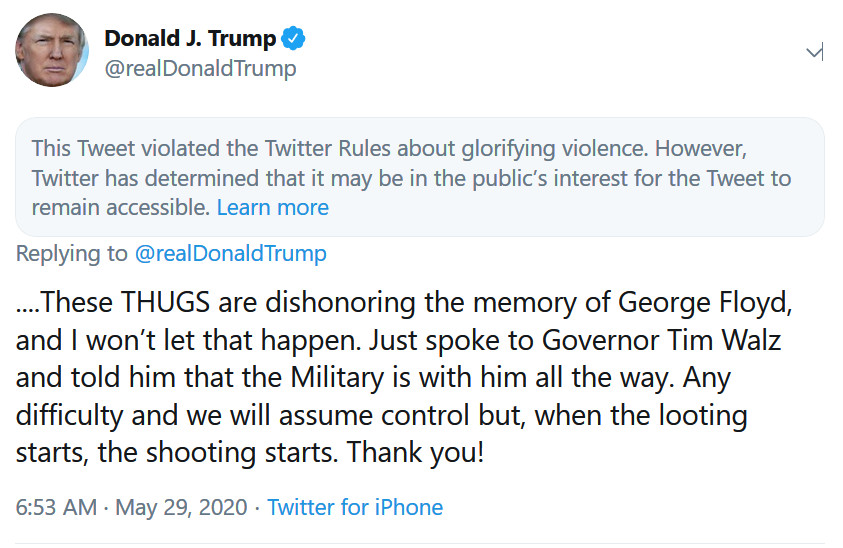 Early this morning Minnesota State Police had come back to the scene. It arrested a dark skinned CNN reporter in front of the running camera (vid). The reporter had asked the police where they wanted his crew to setup. He did not get a response. No reason for his arrest was given. Another CNN reporter, this one of white color, was also approached by police but was permitted to stay:

CNN's Josh Campell, who also was in the area but not standing with the on-air crew, said he, too, was approached by police, but was allowed to remain.

"I identified myself ... they said, 'OK, you're permitted to be in the area,'" recounted Campbell, who is white. "I was treated much differently than (Jimenez) was."

Jimenez is black and Latino.

After CNN called on the governor the reporter and his crew were released. Here he explained what happened. The police did not apologize to him. 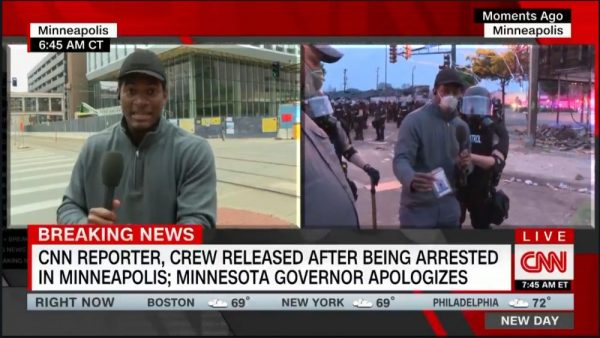 The British government protested against the arrest of the journalists.

There are now public calls for further protests in many more cities. Those are likely to escalate.

Calls for President Xi of China to provide the American rebels with the means to defend themselves against the regime have not yet been answered.