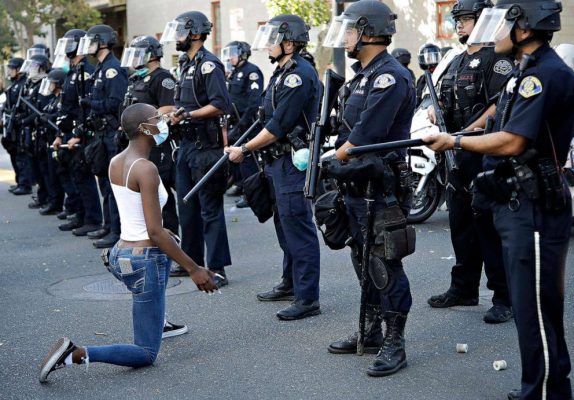 In a blizzard of destruction, assaults on peaceful demonstrators, provocateurs, lies, cover-ups, and fascist proclamations, America teeters at a tipping point. The murder, by police, of George Floyd, has sparked a jaw-dropping response across America. Police in many locations have behaved as instigators and perpetrators of savage violence against citizens attempting to exercise their First Amendment rights to freedom of speech and to assemble to demand a redress of grievances.

African-Americans have over 400 years of grievances to fall back upon. The video footage is undeniable, outrageous, and the crime perpetrated with the complicity of other officers acting under color of authority. The murder of George Floyd will go down in history, but the end results remain unclear and desperately in need of political leadership to turn this into a positive push for justice reform.

Many police have also targeted and maimed journalists, who are also supposed to be protected under the First Amendment. We are now living in a chaotic military occupation, under a militarized police army that behaves as if the Constitution no longer exists.

The most dangerous development yet has been the fascistic Trump junta's attempt to label “Antifa” as a terrorist organization, vowing to scapegoat them and persecute any members they are able to track down. This is classic fascism in action, another opportunity to seize power, divide the population,  demonize, and declare new emergency measures—as the Nazis did repeatedly throughout the 1930s.

In 18 USC §242, all the officers involved in the killing of George Floyd could be charged with “Deprivation of rights under color of law,” but Trump's Attorney General Barr has instead announced an arguably illegal war against U.S. protesters, labeling them as “outside radicals” and then deliberately failing to define “outside” of what exactly? Right-wing conspiracists have already gotten much mileage from spreading paranoia about alleged “outsiders” coming into small towns such as my own.

This divide and conquer strategy, demonization, and the emergency-measures agenda is exactly what Trump has been waiting for. He studied his Hitler.

Unfortunately for us, his predecessors had already empowered the state with police militarization and the 2012 repeal of Posse Comitatus, by none other than Barack Obama. The US empire has long considered the USA a potential “battle space” to be controlled by the military, should the servant class attempt to disrupt the status quo. This past weekend it finally happened.

We are seeing a complete failure of politics to bring accountability to violent, criminal police officers. Numerous complaints had been lodged against the murdering officer over the years but predictably ignored. The pattern nationwide is to protect police from citizen complaints, rather than to protect citizens from dangerous, violent police offenders. An undercover investigation by CBS News revealed repeated intimidation of citizens who try to file police misconduct complaints.

Trump, Barr, big city mayors, and governors have all jumped on the “law and order” bandwagon, thereby placing the blame onto protesters and thus circumventing the very issue they are out in the streets to protest. This is the state's playbook: distraction, changing the tune, changing the game. Even those like Bernie Sanders, who Tweeted about the need for police reform have entered no legislation on the matter into Congress. Where's your bill, Bernie?

That's the red flag that nothing will change. The public is to be terrorized and literally beaten into submission, sent back to work, and examples made of a few unfortunates. This is state terror. It happens with the approval and complicity of far too many citizens. Too many don't oppose tyranny until it kicks in their own door.

ALMOST EVERYWHERE IN THE WORLD, SEPARATISTS ARE TREATED AS TERRORISTS