SouthFront is Censored under Cover of Pandemic

Censorship of alternative media is becoming more widespread in the COVID19 era. This article documents the case of SouthFront. 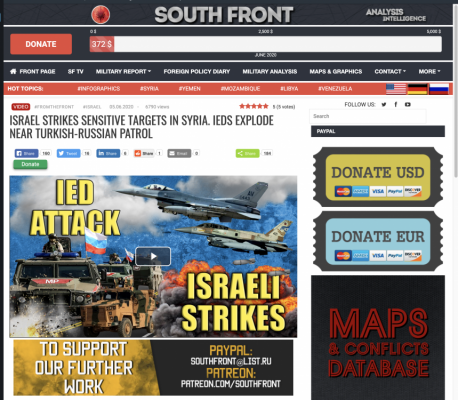 [dropcap]W[/dropcap]here do you find daily news, videos, analysis and maps about the conflict in Syria?  Detailed reports about the conflicts in Libya, Yemen and Venezuela?  News about the rise of ISIS in Mozambique?  Original analysis of events in the US and Russia?  SouthFront is the place.

SouthFront is unique and influential, reaching a global audience of hundreds of thousands. They have  opinion articles but their reports and videos are informational and factual. Their website says,

"SouthFront focuses on issues of international relations, armed conflicts and crises.... We try to dig out the truth on issues which are barely covered by the states concerned and the mainstream media."

A major disinformation and censorship drive against SouthFront was recently launched.  On April 30 the SouthFront Facebook account with about 100,000 subscribers was deleted without warning or notice.

On May 1,  SouthFront's  main YouTube account with over 150 thousand subscribers was terminated. The English language channel had 1,900 uploaded videos with 60 million views over the past 5 years.

While the SouthFront website continues as before, the above actions remove important distribution channels which SouthFront has painstakingly built up.

The censorship has been accompanied by a parallel disinformation campaign promoted by corporate, governmental and establishment "think tank" organizations.  This is in the context where the US State Department's  Global Engagement Center (GEC) has a direct liaison with Silicon Valley companies and teams focused on "countering the propaganda" from Russia, China and Iran with a current budget of $60 million per year. 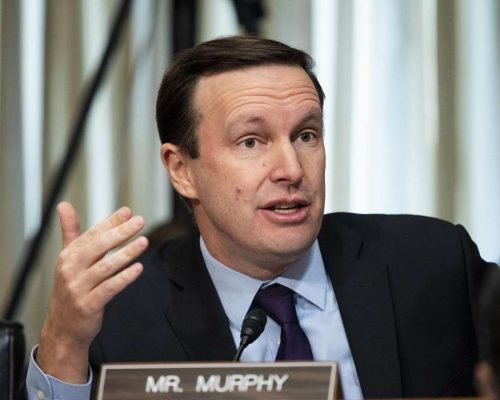 Connecticut's Sen. Chris Murphy (D). The Dems have spearheaded the killing of free speech, essentially a bipartisan project. Scum like Murphy prove that political imperialist yahoos don't only come from South Carolina and other benighted states. That the anti-democratic sickness afflicts the whole political class.

In a March 2020 hearing, Senator Chris Murphy (D - Conn) lobbied for increased funding and more censorship. He said, "It's hard to chase one lie after another. You have to actually go after the source and expose the source as illegitimate or untrustworthy, is that right?” Lea Gabrielle, head of GEC, responded "That's correct."

When the Senator says "it's hard to chase one lie after another", he is acknowledging that it's often hard to show that it's a lie.  Even more so when it is not a lie. It is much easier for the authorities to simply say the source is untrustworthy- or better yet to eliminate them - as they have tried to do with SouthFront.

The elimination of SouthFront's Facebook account was based on a Facebook sponsored investigation titled "April 2020 Coordinated Inauthentic Behavior Report".  The 28 page report says, "We're constantly working to find and stop coordinated campaigns that seek to manipulate public debate across our platforms....We view influence operations as coordinated efforts to manipulate public debate for a strategic goal where fake accounts are central to the operation.... This month we removed eight networks of accounts, Pages and Groups..... Our investigation linked this activity to ... two media organizations in Crimea - News Front and SouthFront. We found this network as part of our internal investigation into suspected coordinated inauthentic behavior."

First, SouthFront is not trying to "manipulate public debate"; they are providing news and information which is difficult if not impossible to find elsewhere.  It seems to be the censors who are trying to manipulate debate by shutting out some voices.

Second, SouthFront does not have "fake accounts"; they have a public website plus standard social media outlets like Facebook and YouTube (until cancelled). Third, SouthFront has no connection to NewsFront nor operations in Crimea.

NewsFront and SouthFront are completely different organizations. They share the name "Front" but that is irrelevant. Does Facebook confuse the New York Times with Moscow Times?  After all, they both have "Times" in their title.

Facebook has shut down SouthFront on the basis of misinformation and smears.

The  Digital Forensic Research Lab (DFRLab) was created by the Atlantic Council, a "non partisan organization that galvanizes US global leadership". It is another organization which is quick to label alternative foreign policy voices as "Russian propaganda". DFRLab claims to have  "operationalized the study of disinformation by exposing falsehoods and fake news". They reported the censorship of SouthFront with a report titled "Facebook removes Russian propaganda outlet in Ukraine" with subtitle "The social network took down assets connected to News Front and SouthFront, propaganda websites supportive of Russian security services".  They reported that the two "demonstrated a close relationship by liking each other's pages." As anyone who uses Facebook is aware, it is common to "like" a wide variety of articles and publications. The suggestion that "liking" an article proves a close relationship is silly. (And a cynical falsehood.—Ed)

The DFRLab  report says News Front and SouthFront "disseminated pro-Kremlin propaganda in an array of languages, indicating they were attempting to reach a diverse, international audience beyond Russia."

First, NewsFront and SouthFront are completely distinct and separate organizations.  Second, is there anything unusual about a website trying to expand and reach different audiences? Don't all publications or outlets do that?  This is a tactic of the new censors: to portray normal behavior as sinister.

Another censorship tactic is to assert that it is impermissible to question the veracity of certain findings.  Thus DFRLab report says NewsFront posted "outright disinformation" when it published a story that "denied the culpability of Russian-backed separatists' involvement in the shoot-down of Malaysia Airlines MH-17".  They suggest this proves it is Russian propaganda and false. However, the facts about the downing of MH-17 are widely disputed. For example. one of the foremost American investigative journalists, the late Robert Parry, came to the same conclusion that the MH-17 investigation was manipulated and the shoot-down was probably NOT as portrayed. Parry did many articles on this important event, confirming that it is not "Russian propaganda".

The Atlantic Council is one of the most influential US "think tanks". It appears they have created the DFRLab as a propaganda tool to disparage and silence the sources of alternative information and analysis.

The goals and priorities of the European Union are set by the European Council.  They are also increasingly active in suppressing alternative information and viewpoints.

This organization is part of the disinformation campaign against SouthFront. In April 2019 they published an analysis "SouthFront - Russia Hiding Being Russian". The story falsely claims that SouthFront "attempts to hide the fact it is registered and managed in Russia."  The SouthFront team is international and includes Russians along with numerous other nationalities. Key spokespersons  are the Bulgarian, Viktor Stoilov,  and an American, Brian Kalman. They do not hide the fact that the website is registered in Russia or that PayPal donations go to an account in Russia. The website is hosted by a service in Holland. It is genuinely international.

EUvsDISINFO demonstrates disinformation tactic of falsely claiming to have "exposed" something that is "hidden" when it is public information. There is nothing sinister about collaboration between different nationalities including Russia. EUvsDISINFO suggests there are sinister "pro-Kremlin networks".  In reality, SouthFront is a website run by a dedicated and underpaid staff and lots of volunteers.  While the European Council gives millions of dollars to EUvsDISINFO, SouthFront operates on a tiny budget without government support from Russia or anywhere else.

False accusations by US Department of Defense

On April 9,  the Deputy Assistant Secretary of Defense, Laura Cooper, spoke at a press briefing.  She identifies SouthFront by name and accuses them of "reporting that there actually was no pandemic and that some deaths in Italy might in fact have been from the common flu".

The first accusation is because of the SouthFront article "Pandemic of Fear". In contrast with the accusation, the article says, "The COVID-19 outbreak is an apparent threat which cannot be ignored."  The article also discusses the much less reported but widespread pandemic of fear.

The second false accusation is regarding the high death toll in Italy. SouthFront reported the findings of a report from the Italian Ministry of Health which suggested the previous mild winter and flu season had "led to an increase in the pool of those most vulnerable (the elderly and those with chronic illnesses) that can increase the impact of the epidemic COVID-19 on mortality and explain, at least in part, the increased lethality observed in our country."  This is very different than saying the deaths were caused by the common flu. In any case, the findings came directly from Italian health authorities not SouthFront.

In the same press conference, the Deputy Assistant Secretary of Defense says she wishes to "reign in malign actors that are spreading misleading disruptive information".   The censors claim the higher ground but engage in misinformation and falsehoods as they seek to silence discussion and debate.

There is a coordinated effort to manipulate and restrict what the public sees and hears in both North America and Europe.  Under the guise of "fact checking" and stopping "Russian propaganda", the establishment has created private and government sponsored  censors to distort and diminish  questioning media.  They label alternative media "Russian" or "pro Kremlin" even though many of the researchers and writers are from the West and have no connection or dependency on the Russian government.

SouthFront is an example of a media site doing important and original reporting and analysis.  It is truly international with offices in several countries. The staff and volunteers include people from four continents. The censorship and vilification they are facing seems to be because they are providing information and analysis which contradicts the western mainstream narrative.

In recent developments, SouthFront is posting videos to a secondary YouTube channel called SouthFront TV. When that was also taken down on May 16, they challenged the ruling and won. The channel was restored with the acknowledgment "We have confirmed that your YouTube account is not in violation of our Terms of Service."

SouthFront is still trying to have their main channel with 152K subscribers restored. Their Facebook account is still shut down and attempts to disparage their journalism continues. The censorship has escalated during the Covid19 crisis.

Rick Sterling is an investigative journalist based in the San Francisco Bay Area. He can be reached at rsterling1@protonmail.com