Home AMERICAN BRAINWASH Was It Only “Fear Itself?”: FDR and Today

Was It Only “Fear Itself?”: FDR and Today

Print this post.
Please make sure these dispatches reach as many readers as possible. Share with kin, friends and workmates and ask them to do likewise.
Gary Olson

Self-serving actions by the ruling elite— 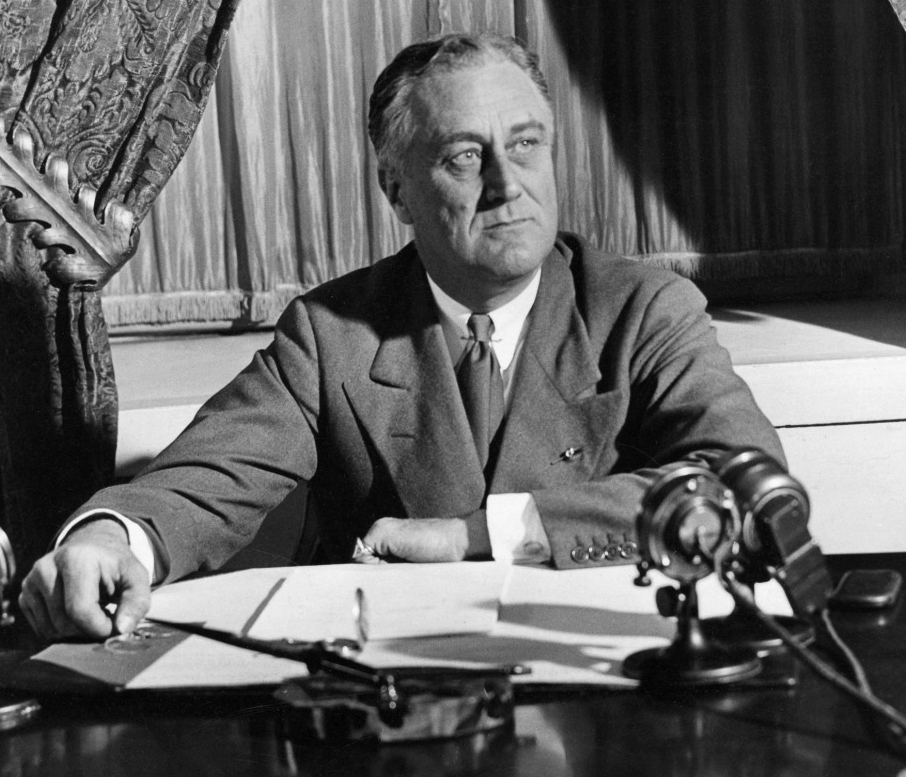 Franklin D. Roosevelt at the White House during one of his fireside chats. (Photo: National Archives). An astute politician, he acted as the consummate liberal, saving the status quo from its own savage instincts and avoiding a clear revolutionary challenge.

"Movement” politics is how the people flex their power, while electoral politics under the corporate duopoly is the domain of the moneyed classes."—Glen Ford, Black Agenda Report

While it’s myth that after the stock market crash of 1929, brokers pitched themselves off of tall buildings in Lower Manhattan (None did. A real buzz killer), there was an uptick in suicides among moguls by less dramatic means for a few years. Today, amidst the cascading bad economic news, investors seemingly have only two worries. First, that further waves of COVID-19 infections and deaths might sidetrack the economy’s  reopening and affect profits. The second is  that procrastinators might be left behind—FOMO, the  Fear of Missing Out—as the market continues to rise. One thing that they’re not losing any sleep over is that working class consciousness is rising to the radical level of the 1930s when capitalism faced genuine peril.
In 2020, as in the 1930s, the economy is tanking, unemployment is at Great Depression levels with another 1.5 million workers having filed for  unemployment last week, Federal regulations (600+) having been dismantled, CEO compensation now at 287 times that of workers and of the 11 Fed financial bailouts, 10 went to Wall Street banks. Further, at the inception of the Covid-19 outbreak, over 70 percent of Americans were already living on the financial edge, with lifetime savings depleted, and home foreclosures multiplying. Now, many of the jobs losses are terminal, millions of stores remain shut down across the country, angry protesters throng the streets, and an exceedingly grim future awaits most of the citizens.
Again, as in 1933, the Federal government is taking bold action. But instead of FDR’s New Deal, this time the decisive action entails a a $4.5 trillion bailout of emergency corporate lending, some pittance payments to workers, and ominous threats about the dire consequences of not returning to their jobs. What accounts for the difference in the government’s response then and now? I suggest that both responses were self-serving actions by the ruling elite and it’s to our peril not to understand that fact.
As I’ve noted previously, big tech companies have proven virtually immune to what’s happening in the economy inhabited by the rest of us. The tech-heavy NASDAQ recently surpassed 10,000 before retreating and Amazon, Alphabet (Google) and Facebook are soaring. Apple and Microsoft recently became the first to reach $1.5 trillion market caps.  According to investment strategists,  the Fed’s maintaining low interest and inflation rates has been the magic elixir  for these big tech companies.
Robert Armstrong, writing in The Financial Times (quoted in NYT, 6/11/2020) notes, in a strikingly nonchalant  manner, that all of this is only more “evidence of an inherent and structural tension between the owning class and the working class.”  In the United States, where a small percentage owns most of the wealth, they reap the gains from a resurgent stock market. Thus, as Armstrong continues, “Covid-19 has put working-and-middle-class people under severe strain, while the asset-owning class have felt relatively little pain.”
The Great Depression’s Legacy: FDR’s Efforts to Save Capitalism
After the Great Crash of 1929, a broad spectrum of prominent American writers, artists, poets, playwrights, and painters offered enthusiastic support for socialist ideas. Concurrently, ordinary citizens were questioning the precepts of capitalism and the traditional U.S. political system. Breadlines, shantytowns and hunger marches were growing along with the growing appeal of left-wing class politics and labor radicalism. Unaffiliated groups were organizing self-help cooperatives and racially integrated Unemployed Councils, organized by Communists, were springing up. Protests blocking evictions were occurring in major cities, often involving violent confrontation with the police. From 1930-1932, over 700 actions by the unemployed were reported to the Communist party’s newspaper, the Daily Worker. (Note: The CP ultimately followed directives from the CP International in joining the “Popular Front” and supporting the New Deal.)
.

“The crisis we face is not, as the ruling elites want us to believe, limited to police violence. It is a class and generational revolt. It will not be solved by new police reforms. The problem is an economic and political system that has by design created a nation of serfs  and obscenely rich masters."—Chris Hedges.

Gary Olson is Professor Emeritus of Political Science at Moravian College in Bethlehem, PA. His most recent book is Empathy Imperiled: Capitalism, Culture and the Brain (NY: Springer, 2013.) Contact: olsong@moravian.edu

ALL CAPTIONS AND PULL QUOTES BY THE EDITORS NOT THE AUTHORS
RevisShielded: 82
All comments subject to anti-hacking filters.
0
FacebookTwitterPinterestRedditEmail
previous post