Home Uncategorized Why The Chinese-Indian Skirmishes May Escalate

Twenty Indian Army personnel, including a commanding officer (CO), were killed in a fierce clash with Chinese troops in the Galwan Valley in eastern Ladakh on Monday night, the biggest military confrontation in over five decades that has significantly escalated the already volatile border standoff in the region.
...
Government sources said the Chinese side too suffered "proportionate casualties" but chose not to speculate on the number. An ANI source has speculated that at least 43 Chinese soldiers have been seriously injured or killed in the clash.

Both sides have agreed to not use guns along the Line of Actual Control (LAC) between the two countries. The soldiers used clubs and stones to fight each other during the night on a mountain ridge above the steep canyon of a very cold river at 4,000 meter (14,000ft) height. Apparently many of the dead fell off the ridge down into the river and died of hypothermia. 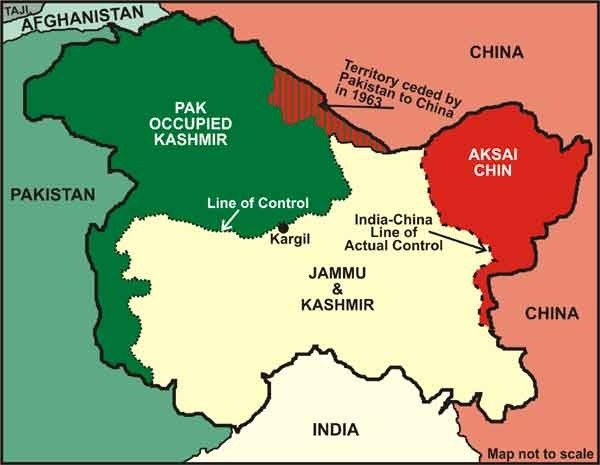 Minor clashes in the area over the historically ill defined and disputed border have been ongoing since April. The immediate reason seems to be a new military access road that India has build towards the LAC and more aggressive patrolling on both sides. But the strategic reasons behind these clashes loom much larger.

First a reminder of the area's history:

At the time of the British withdrawal from India, Maharaja Hari Singh, the ruler of the state, preferred to become independent and remain neutral between the successor dominions of India and Pakistan. However, an uprising in the western districts of the State followed by an attack by raiders from the neighbouring Northwest Frontier Province, supported by Pakistan, put an end to his plans for independence. On 26 October 1947, the Maharaja signed the Instrument of Accession joining the Dominion of India in return for military aid. The western and northern districts presently known as Azad Kashmir and Gilgit-Baltistan passed to the control of Pakistan, while the remaining territory became the Indian state Jammu and Kashmir.

The accession was limited to certain issues and Jammu and Kashmir became an autonomous state.

During the India-Pakistan partition in 1947 Pakistan had taken the northern part of the area known as Gilgit-Balistan while China took Aksai Chin, a historic part of Tibet. Out of historic, religious and cultural reasons both would probably like to claim even more of the currently Indian area. 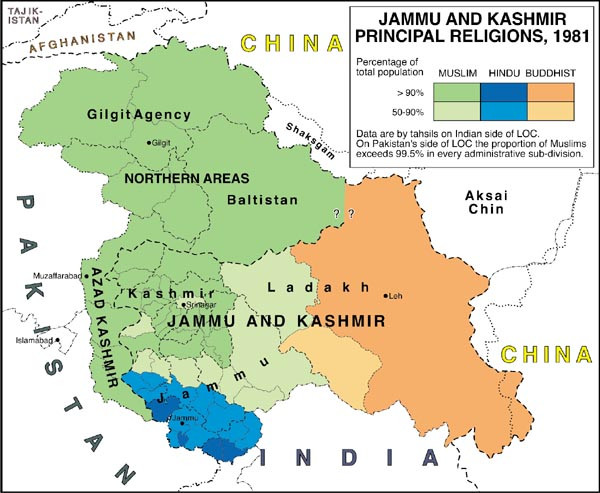 Kashmir is largely Muslim and Pakistan sees it as part of its country. The Ladakh region once belonged to Tibet. It is thinly populated with people who are Buddhist and speak a similar Tibetan dialect as the people in Aksai Chin on the Chinese side.

In August 2019 the Hindu-fascist government of India under President Narendra Modi unilaterally revoked parts of the constitution that guaranteed the autonomous status of the Jammu and Kasmir region. It also asserted direct control of the Ladakh part along the Chinese border. We predicted that this would lead to renewed clashes with Pakistan:

J&K is majority Muslim. It is of strategic importance as the headwaters of Pakistan's main water source, the Indus river system, are situated in J&K's mountains. Pakistani nationalist believe that it should be part of their state.
...
J&K's special status protected its inhabitants from overwhelming migration of Hindus from main India. Modi will now push his followers to move into the state. His aim in the end is to create a majority Hindu state in a currently majority Muslim one.

When the Indian government move was discussed in parliament a government minister asserted claims on the areas that now belong to China and Pakistan:

Home Minister Amit Shah on Tuesday asserted in Lok Sabha that Pakistan occupied Kashmir (PoK) and Aksai Chin are part of Jammu and Kashmir and that Kashmir Valley is an integral part of the country.
...
“Kashmir is an integral part of India, there is no doubt over it. When I talk about Jammu and Kashmir, Pakistan occupied Kashmir and Aksai Chin are included in it,” he said.

The claim set off alarm bells in Islamabad and Beijing.

The only common boarder China and Pakistan have is within the Pakistan controlled Kashmir (POK). Should India eventual try to (re-)gain the area Pakistan and China would be separated. The China Pakistan Economic Corridor (CPEC), a $50 billion project that creates road, rail and pipeline connections from Pakistan's coast towards China, would be interrupted. 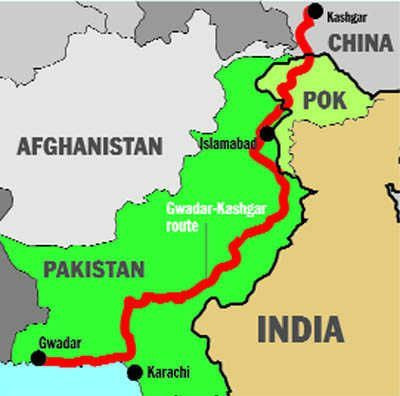 China is financing the corridor as an alternative strategic trade route to the U.S. controlled seaways through the South China Sea and the Strait of Malacca. 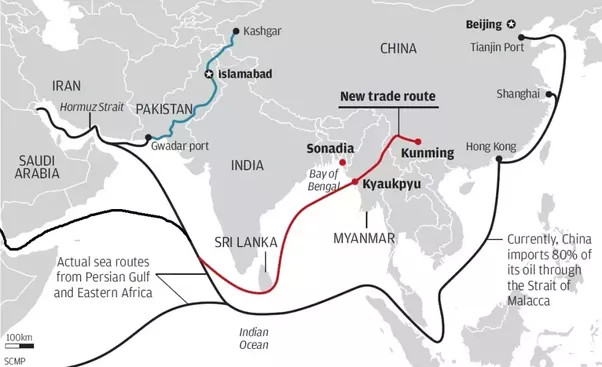 China needs the Pakistan connection to keep a line of communication with the oil fields of the Middle East during a conflict in the Pacific.

China’s core interests have dictated that India should be firmly dissuaded from considering recovery of Gilgit-Baltistan to fulfil its long-stated goal of unifying Kashmir, in pursuit of a unanimous parliamentary resolution passed in 1994. China has also been vocal about retaining Aksai Chin — the essential link between Tibet and Xinjiang.

The removal of autonomy from J&K last year was not the only issue that alarmed China. India under Modi gave up its traditional neutrality and joint the U.S. 'Indo-Pacific' project in a pact against China. India has for quite a while build up its military infrastructure in the region:

[T]he Chinese have also been uncomfortable with infrastructure development along the Line of Actual Control (LAC) with India, especially due to the pressure it imposes on Aksai Chin.

By 2008, India had reactivated airfields of Daulet Beg Oldie (DBO) and Fukche, reducing reliance on Leh as the main air support hub for Ladakh. A year later, the Nyoma airfield had also been revived. “DBO is on the old Leh-Tarim basin trade route through the Karakoram pass and only nine kilometers northwest of Aksai Chin. It is also important because India’s physical link with China’s Xinjiang province, and not Tibet, is routed through DBO,” says a former diplomat, who did not wish to be named.

The revival of the aviation infrastructure has augmented India’s capacity to quickly insert troops and military supplies along the LAC. “DBO, Fukche and Nyoma have supplemented Leh, providing a major boost to intra-theatre movement of Indian forces and equipment along the LAC,” Air Vice Marshal (Retd.) Amit Aneja, told The Hindu.

Satellite pictures show that China has positioned more troops behind the LAC and is ready should the current situation escalate further. India has likewise send reinforcements into the wider area.

The U.S. and Australia have verbally supported India during the recent clashes. But neither seems inclined to become involved in an actual conflict.

The Sino-Indian war of 1962 started over similar border skirmishes and also with a larger strategic background. Within a few days China took several areas from India but after a month it pulled back from Indian territory. The idea had been to teach India a lesson and the point had been made.

Should the conflict escalate I expect a similar short and limited conflict as a reminder to Modi that a non-neutral alignment and claims on foreign territory do carry certain costs.

Was It Only “Fear Itself?”: FDR and Today