Home CAPITALIST SICKNESS US Billionaire Wealth Surges to $584 Billion, or 20 Percent, Since the Beginning of the Pandemic

US Billionaire Wealth Surges to $584 Billion, or 20 Percent, Since the Beginning of the Pandemic

June 20, 2020
Please make sure these dispatches reach as many readers as possible. Share with kin, friends and workmates and ask them to do likewise. 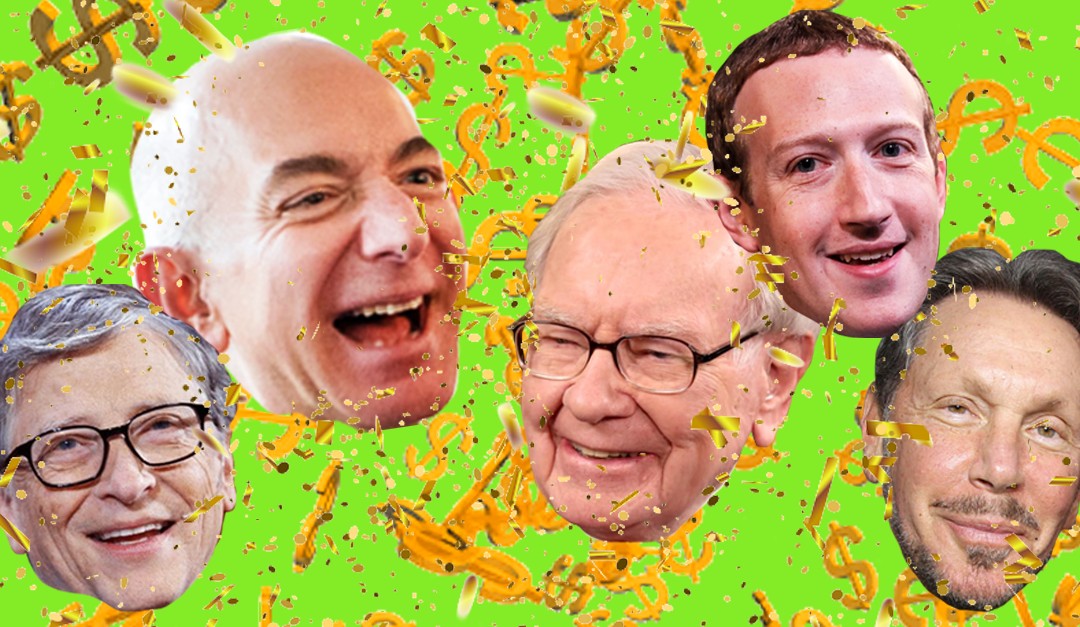 As the Federal Reserve reported during the week of June 10th, more than $6.5 trillion in household wealth vanished during the first three months of this year as the pandemic tightened its hold on the global economy.

“This is the biggest economic shock in the U.S. and in the world, really, in living memory,” Fed Chair Jerome H. Powell told reporters on June 10th. “We went from the lowest level of unemployment in 50 years to the highest level in close to 90 years, and we did it in two months.”

Since March 18th, the US Billionaire class has seen their wealth increase by 20%, or $584 billion, since the rough beginning of the pandemic, as 45.5 million Americans filed for unemployment and the economy cratered, according to a new analysis by Americans for Tax Fairness (ATF) and the Institute for Policy Studies – Program on Inequality (IPS), building on the IPS Billionaire Bonanza 2020 report.

Overall, between March 18—the rough start date of the pandemic shutdown, when most federal and state economic restrictions were in place—and June 17, the total net worth of the 640-plus U.S. billionaires jumped from $2.948 trillion to $3.531 trillion, based on the two groups’ analysis of Forbes data. Since March 18, the date Forbes released its annual report on billionaires’ wealth, the U.S. added 29 more billionaires, increasing from 614 to 643. During the same three months, over 45.5 million people filed for unemployment, according to the Department of Labor.

The top five billionaires—Jeff Bezos, Bill Gates, Mark Zuckerberg, Warren Buffett and Larry Ellison—saw their wealth grow by a total of $101.7 billion, or 26%. They captured 17.4% of the total wealth growth of all 600-plus billionaires in the last three months. The fortunes of Bezos and Zuckerberg together grew by nearly $76 billion, or 13% of the $584 billion total.

Sources: All data analyzed by ATF and IPS is from Forbes and available here. March 18, 2020 data is from the Forbes World’s Billionaires List: The RIchest in 2020. June 17, 2020 data was taken from Forbes real-time estimates of worth that day.

“The last thing U.S. society needs is more economic and racial polarization,” said Chuck Collins, director of the Institute for Policy Studies Program on Inequality and co-author of the Billionaire Bonanza 2020 report. “The surge in billionaire wealth and pandemic profiteering undermines the unity and solidarity that the American people will require to recover and grow together, not pull further apart.”

During the same approximate three-month period nearly 2.1 million Americans fell ill with the virus and about 118,000 died from it. Among other pandemic victims are 27 million Americans who may lose their employer-provided healthcare coverage. Low-wage workers, people of color and women have suffered disproportionately in the combined medical and economic crises. Billionaires are overwhelmingly white men.

Wealth growth of other select billionaires in the top 30 on the Forbes June 17 list is below. 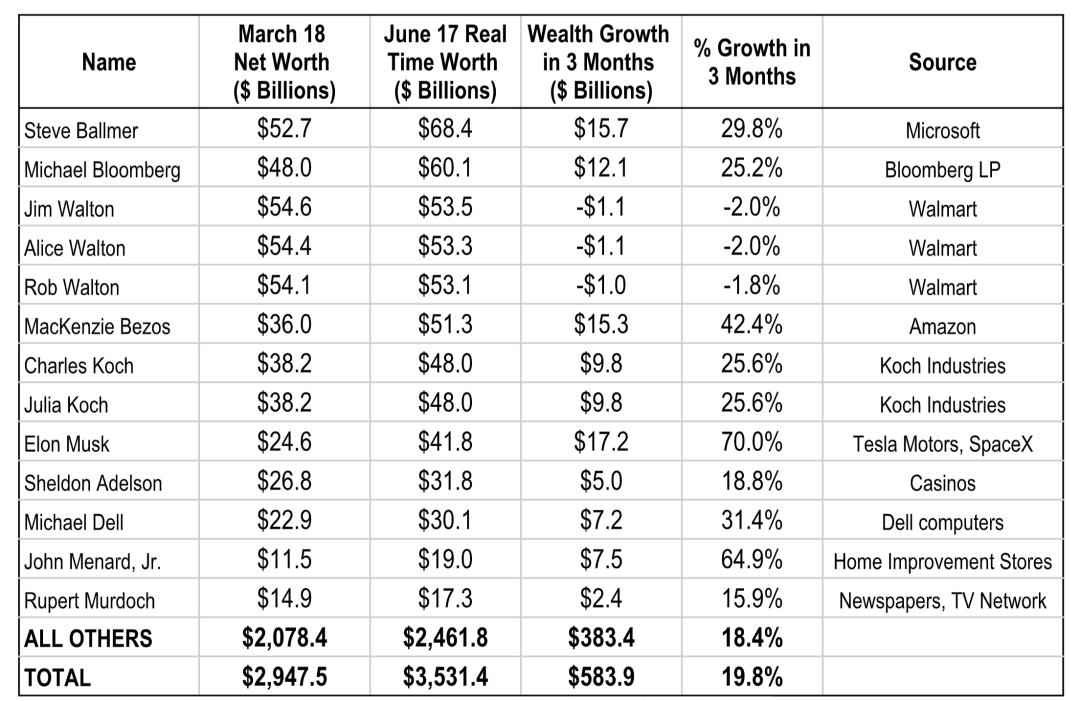 Remarkably, 12 billionaires more than doubled their wealth over the last three months. One of them, Trevor Milton, the founder of Nikola Motor that is building semi-trucks powered by batteries and hydrogen, increased his wealth more than five times. 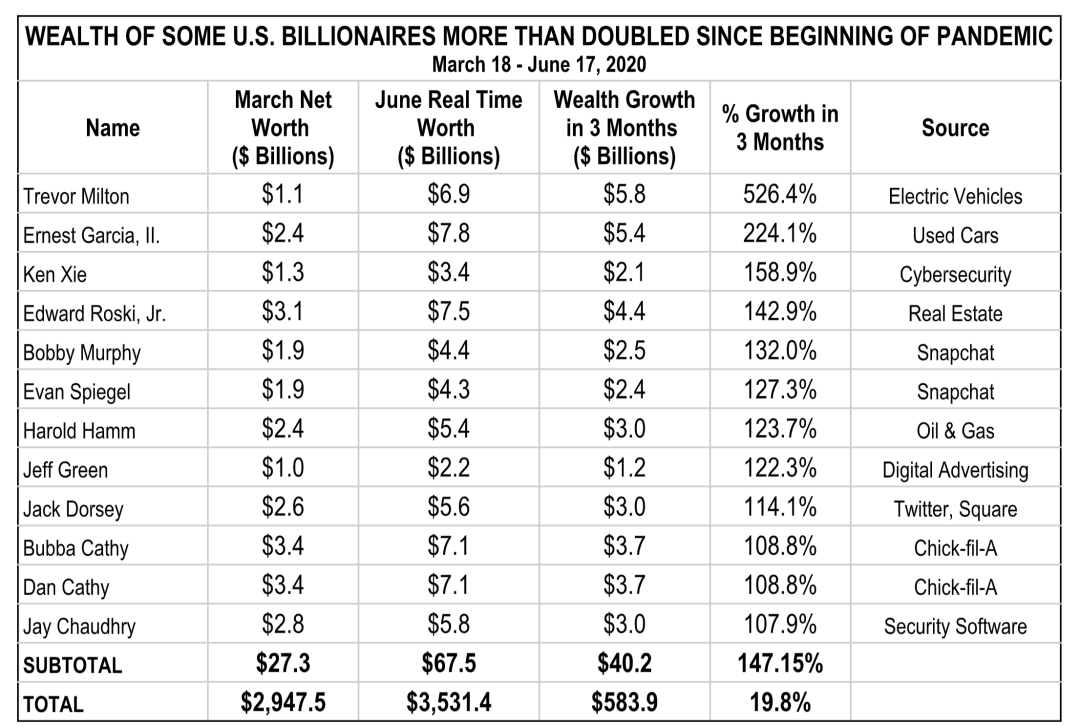 Sources: All data analyzed by ATF and IPS is from Forbes and available here. March 18, 2020 data is from the Forbes World’s Billionaires List: The RIchest in 2020. June 17, 2020 data was taken from Forbes real-time estimates of worth that day.

Decades of tax cuts for the rich have fueled the growth of billionaires and their wealth. Even in the midst of the greatest national emergency since World War II, tax handouts to the wealthy have continued—most recently in the form of the “Millionaire Giveaways” slipped into the CARES pandemic relief law enacted in late March.

The recently passed House HEROES Act would repeal this tax break that is giving an average tax cut of $1.6 million this year to 43,000 millionaires and billionaires, according to the Joint Committee on Taxation. JCT estimates closing this loophole would raise $246 billion, a huge sum that could be used for pandemic relief.

ABOUT THE AUTHOR
Chuck Collins directs the Program on Inequality and the Common Good at the Institute for Policy Studies. Follow him on Twitter @Chuck99to1.
[post-views]

As monuments are being toppled & WWII facts erased, Vladimir Putin gives a stark warning about playing games with history