Print this post.
Please make sure these dispatches reach as many readers as possible. Share with kin, friends and workmates and ask them to do likewise.
Jimmy Dore & Max Blumenthal

"Trump Just Drowned in the Swamp..." 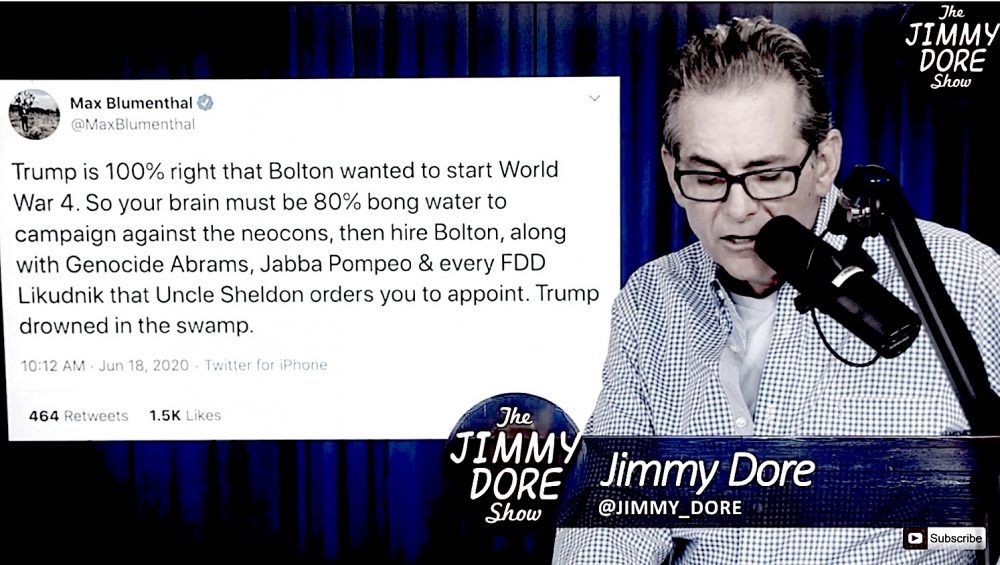 Meanwhile, back at the ranch...as widely expected—

Finally watched the @MarthaRaddatz interview of @AmbJohnBolton. It wasn’t really an interview though. It felt more like a 30 minute neocon propaganda blitz produced by Bolton, with Raddatz and ABC correspondents acting respectively as his muse and chorus.

Demonstrating, inter alia, for the Nth time, the sheer repulsive corruption of the US media and liberals in general. Feeding mental manure 24/7 to comfortable liberal audiences that believe themselves to be cultured and well informed!

For the record, @MarthaRaddatz is the ABC correspondent who cried on air on election night about Michael Flynn’s supposed influence over Trump on Syria https://t.co/gIEFagwc5r

ABOUT THE AUTHOR
Jimmy Dore is chiefly an astute political commenator and professional standup comedian (on his spare time). Max Blumenthal is an anti-imperialist/anti-zionist journalist and co-founder of The Grayzone blog.

ALL CAPTIONS AND PULL QUOTES BY THE EDITORS NOT THE AUTHORS
RevisShielded: 1,106
All comments subject to anti-hacking filters.
1
FacebookTwitterPinterestRedditEmail
previous post