Print this post.
Please make sure these dispatches reach as many readers as possible. Share with kin, friends and workmates and ask them to do likewise.
Eric Zuesse 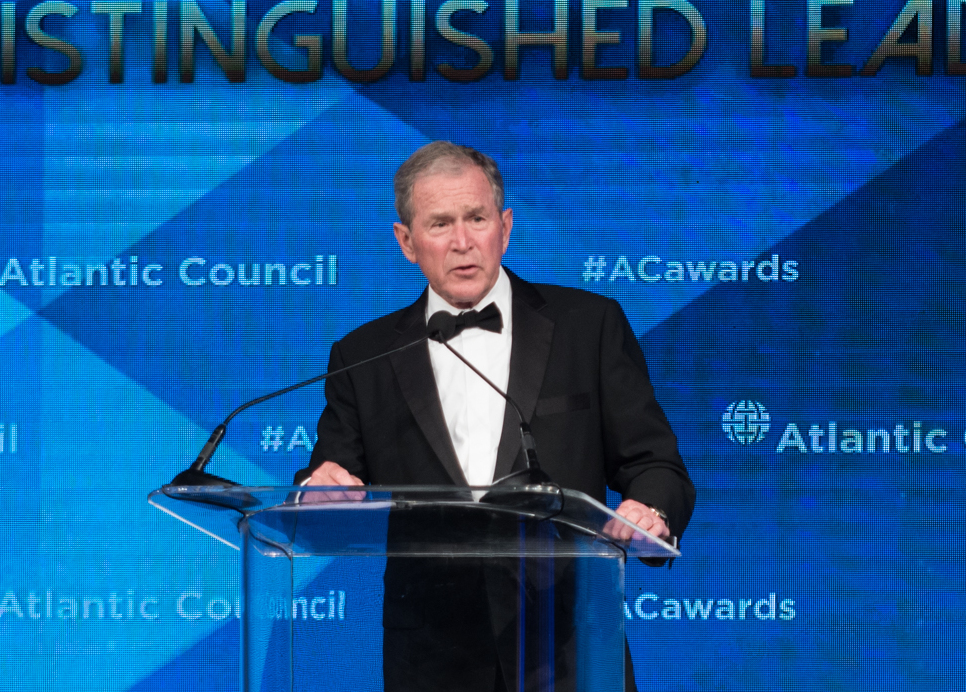 FROM ONE CRIMINAL TO ANOTHER: Unindicted war criminal George W. Bush speaks after receiving the Distinguished International Leadership Award during the Atlantic Council's Distinguished Leadership Awards dinner in Washington, D.C., May 10, 2018.  The Democrats and their media shills have played an aggressive role in rehabilitating him and even Dick Cheney. Thanks to a culture of nonstop pervasive lies, history happens in a vacuum in America.

Lots of U.S. invasions are based on blatant lies by the U.S. Government and its stenographic ‘free press’ (which is just as controlled by America’s 600 billionaires as the Soviet Union’s press was controlled by its Communist Party), but this will discuss only one instance, which is especially well-documented:
On 26 May 2004, the New York Times published an editorial headlined “The Times and Iraq”, which seemed to apologize for something, but which wasn’t clear about what, specifically, was being apologized for, if this was an apology. They said that after having “studied the allegations of official gullibility and hype” regarding “the issue of Iraq’s weapons and possible Iraqi connections to international terrorists,” “we have found a number of instances of coverage that was not as rigorous as it should have been.” They claimed to have been deceived by a U.S. Government that had been deceived by foreigners. (They pretended that the invasion of Iraq didn’t originate in, and from, America: they were blaming foreigners, especially ones who were from Iraq, for America’s invasion of Iraq.) “Administration officials now acknowledge that they sometimes fell for misinformation from these exile sources. So did many news organizations — in particular, this one.” (So, they were apologizing for “many news organizations — in particular, this one,” implying that they hadn’t done anything out of the ordinary or especially worth apologizing for.) They asserted that “Editors at several levels who should have been challenging reporters and pressing for more skepticism were perhaps too intent on rushing scoops into the paper.” They were pushing the blame down to their employees, the reporting staff, their own hirees — away from themselves (much less the newspaper’s owners). The earliest example they cited of this was:
On Sept. 8, 2002, the lead article of the paper was headlined “U.S. Says Hussein Intensified Quest for A-Bomb Parts.” That report concerned the aluminum tubes that the administration advertised insistently as components for the manufacture of nuclear weapons fuel. The claim came not from defectors but from the best American intelligence sources available at the time. Still, it should have been presented more cautiously. There were hints that the usefulness of the tubes in making nuclear fuel was not a sure thing, but the hints were buried deep, 1,700 words into a 3,600-word article. Administration officials were allowed to hold forth at length on why this evidence of Iraq's nuclear intentions demanded that Saddam Hussein be dislodged from power: “The first sign of a ‘smoking gun,’ they argue, may be a mushroom cloud.”
Five days later, The Times reporters learned that the tubes were in fact a subject of debate among intelligence agencies. The misgivings appeared deep in an article on Page A13, under a headline that gave no inkling that we were revising our earlier view (“White House Lists Iraq Steps to Build Banned Weapons”). The Times gave voice to skeptics of the tubes on Jan. 9, when the key piece of evidence was challenged by the International Atomic Energy Agency. That challenge was reported on Page A10; it might well have belonged on Page A1.
George W. Bush seems to have been informed, in advance, about this Times article regarding aluminum tubes; and, so, on Saturday, September 7th, of 2002, he said, while standing beside British Prime Minister Tony Blair, 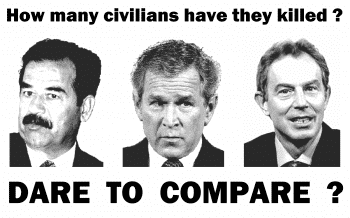 Investigative historian Eric Zuesse is the author, most recently, of  They’re Not Even Close: The Democratic vs. Republican Economic Records, 1910-2010, and ofCHRIST’S VENTRILOQUISTS: The Event that Created Christianity.

ALL CAPTIONS AND PULL QUOTES BY THE EDITORS NOT THE AUTHORS
RevisShielded: 9,812
All comments subject to anti-hacking filters.
0
FacebookTwitterPinterestRedditEmail
previous post