Home ABOMINATIONS Memorable: Sen. Mike Gravel tries to shame the Democrat top tier warmongers, and is treated like a joke by panelists and media

Memorable: Sen. Mike Gravel tries to shame the Democrat top tier warmongers, and is treated like a joke by panelists and media 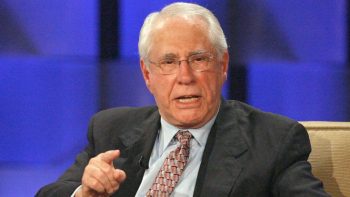 Sen. Mike Gravel has often been called "unorthodox", "maverick" and similar terms designed to paint him as outside the "main consensus" and thereby "unelectable", one of the many ways the presstitutes delegitimate voices challenging the empire. Gravel ran again in 2019, for purely educational reasons, but ended his bid endorsing Sanders. He obviously did not expect the shameless Sanders to pull the sheepdog act twice.

He called Biden, Obama and Clinton warmongers to their faces in 2008. They laughed, but he wasn't joking.

Watch this clip from a 2008 election debate closely, and see how fellow presidential candidates with the thinly-veiled help of the whore media neutralize the spot on criticism of US foreign policy by Sen. Mike Gravel. The political whores on the panel, including Hillary Clinton, Joe Biden and Barack Obama laugh nervously as Mike Gravel accuses them of warmongering against Iraq, Iran and other nations. Gravel, a dove on Vietnam and a genuine populist, for good measure also denounces America's utterly criminal "first strike" policy on nuclear weapons.  The audience, again, fails to grasp the seriousness of the charge. It's clear they are totally unaccustomed to hearing the truth about this subject, so they  squirm and laugh, not knowing where to place it, while presstitute Brian Williams, sensing the opportunity to be of service to his plutocratic employers, jumps in to deflate the impact of Sen. Gravel's words by seeking "clarification", an old tactic signifying disbelief. Job done. The truth is defanged and buried. Let's move on to the usual jingoist sanctimony, which the rest of the candidates are obviously happy to deliver.
100

Here's a longer clip of the same debate.

Patrice Greanville is a media critic and political analyst serving as editor in chief of this journal. Greanville set up Cyrano's Journal in 1982, the nation's first radical media review, and founded The Greanville Post in 2003, as an experiment in radical digital journalism.

Mapping The State’s Strategy Of Repression Against The Rebellion