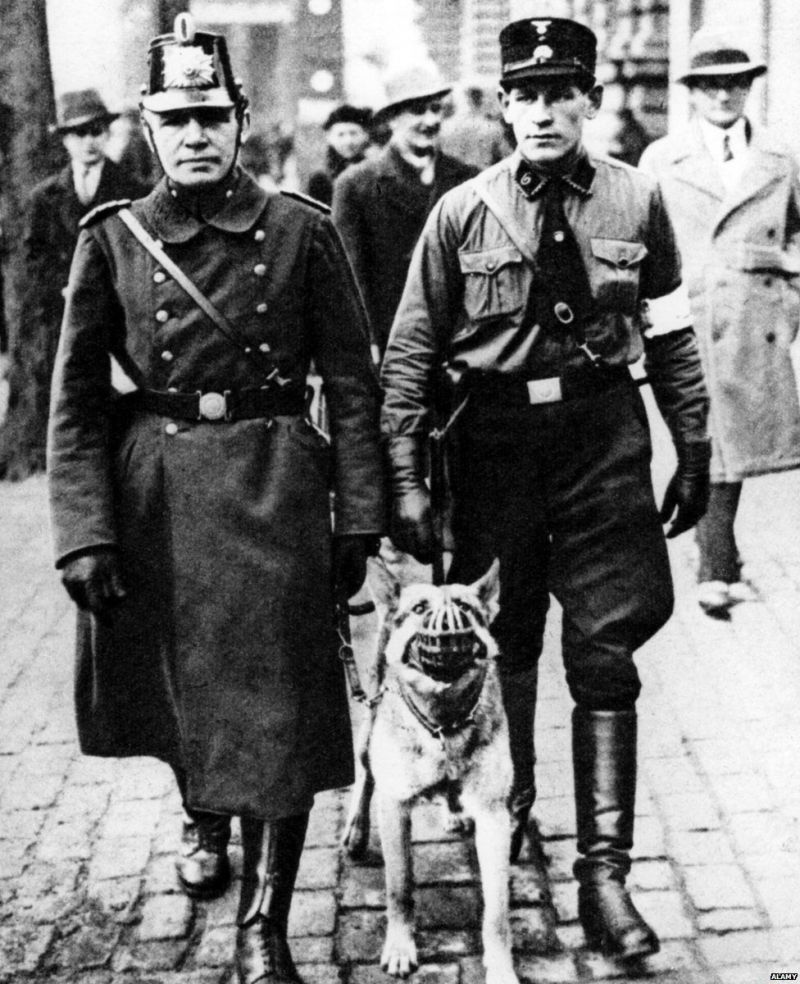 Nazis utilised dogs on many occasions, starting with their use in street fights against leftists, and later in prisoner camps where they served as guard dogs and sometimes to kill inmates as an example.

All Americans of any persuasion need to search the archives of both the Nazi Holocaust and the 1950- 1960s Civil Rights movement. One will see, quite vividly, the use of trained, tough and violent dogs on unarmed civilians. In Germany it was Jews and political rivals ( Communists and Social Democrats) that were set upon by men with sticks and whips leading those vicious dogs. In the south, circa the 50s and 60s, the same scenario held true. Well, under this current far right wing, Neo Fascist ( Neo Nazi?) administration, private companies have secured ' Blackwater type'  goons, replete with their weapons and trained dogs ( read Jeremy Scahill's brilliant 2007 book Blackwater: The Rise of the World's Most Powerful Mercenary Army). Case in point is what happened in September of 2016 in North Dakota at the Dakota Access Pipeline construction site. Indigenous tribal members, along with other peaceful protestors, concerned with the damage to their lands and clean water, raised hell in a protracted struggle to stop the pipeline. The hired thugs and their dogs, along with lots of pepper spray, attacked  the unarmed, peaceful , but vehement group. All in a day's work, yes? 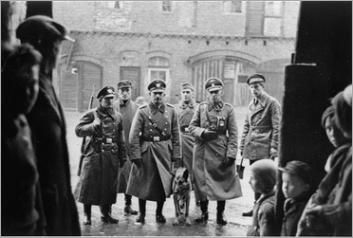 My title seems to refer to dogs. In reality, who are the dogs in question? Man's best friend was NOT born mean, rather had to be taught so. I guess you can say the same for the goons that are always available to do the bidding of the empire. Sometimes the goons are from the same race and class as those they attack. One can study India, before independence, to see how the low level indigenous police were used by the Brits to ' Keep the rabble in line'. The Brits were shrewder than we here in Amerika. Here it became, for God knows how long ( still?), whereupon whites did the policing everywhere, including in the minority sections of towns. If one looks at the footage of that North Dakota 2016 pipeline protest, you won't see any non whites shooting the pepper spray as they sicced their dogs.

It seems our empire always has a full supply of ' Dogs' to do their bidding. Sadly, if one could study the US grunts, our 'Boots on the ground, from Iraq ( phony wars ) 1 and 2 and Afghanistan, one sees the race and class of the overwhelming majority of them. Dark and brown faces, mostly from low income areas of Amerika ( watch Michael Moore's brilliant 2004 film Fahrenheit 911)  joined up with their equally low income white counterparts, simply for the money and perks, for a chance to get out of the ghetto. They were not just super patriotic kids who wanted to kill the A-Rabs  (there was a smaller percentage of those types, but not abundant in numbers). No, between our own home grown kids and the highly paid goons of empire from private security firms like Blackwater ( now called Xe Services ) , who by the way earn 10 to 20 times MORE than our people in uniform, the empire has plenty of Dogs of War at its disposal... and that word seems to fit.


ABOVE: Note the thugs in civvies handling the dogs. Who the hell are they? There's always an ample supply of them to put down domestic insurgencies. As usual, the TV whore media, serving distorted headlines,  did not care to ask.

IN my recent interview with Dr. TP Wilkinson on his history of policing in Amerika, we learn that these original ' Dogs' were called the Slave Patrols in the south. They were hired by the plantation owners to go and find runaway slaves and bring them back... for a bounty. After the Civil War local police in All parts of Amerika were used primarily to ' Keep watch ' on the factories and businesses of the super rich, to , well, ' Keep the rabble ( unions and striking workers ) in line'. This has continued throughout the decades, from the coal mining areas, the agricultural fields, factory assembly lines... anywhere that the super rich employ lower paid drones to punch out products for their enormous profits. It never changes. Why? Well, when you have a ' Bought and paid for ' Two Party/One Party con job, there is little or NO representation for working stiffs. Never was. One hopes that someday, as in the great John Sayles 1987 film classic Matawan, about the 1920 Mingo County, West Virginia coal miners' strike, those who are supposed to ' Serve and Protect' do so for working stiffs FIRST!

Don't just blame the dogs of empire... blame those who enticed them to do those evil deeds also.