Home ABOMINATIONS For US Corporate Media, Not Intervening in Chinese Politics Is Journalistically Suspect

For US Corporate Media, Not Intervening in Chinese Politics Is Journalistically Suspect 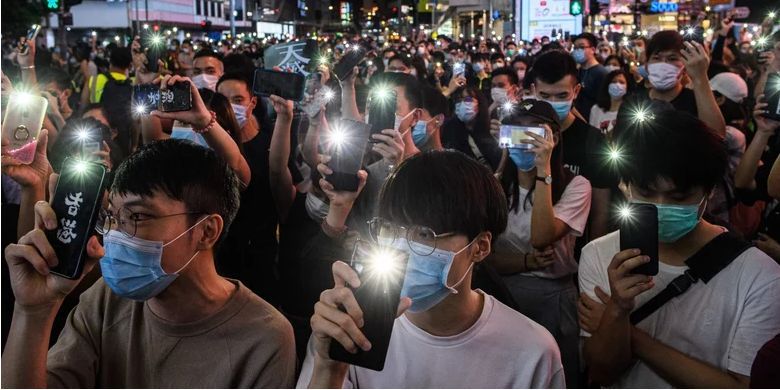 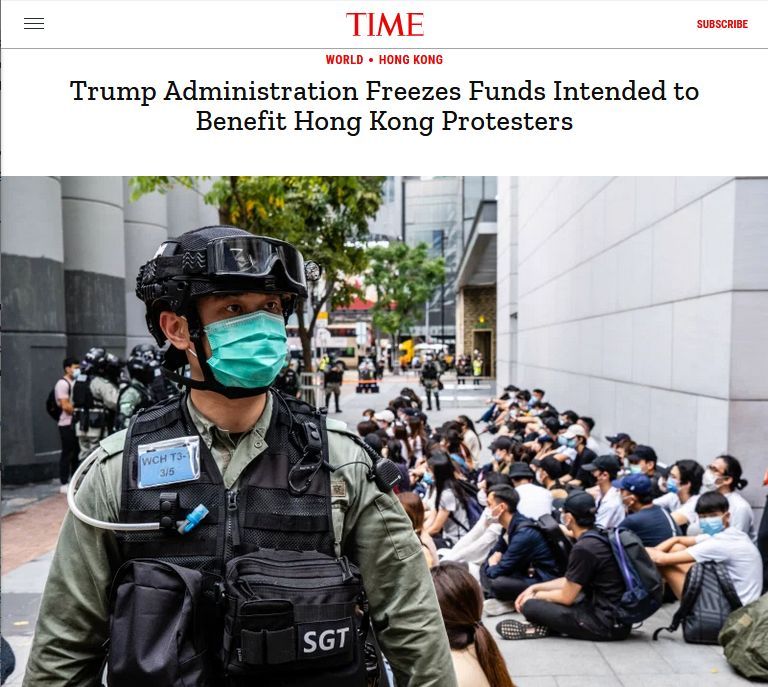 While reporting that a US government project was working to “help people in Hong Kong evade surveillance by the Chinese government,” Time (6/26/20) nevertheless treats such backing as a Chinese allegation: “The Chinese government has frequently claimed that ‘foreign forces’ are behind the protests.”

Time  (6/26/20) reported last month that Michael Pack, the ultraconservative Trump-appointed CEO of the US Agency for Global Media (USAGM), froze funding related to the anti-Beijing protests in Hong Kong. According to the magazine, the agency—which oversees Voice of America, Radio Free Europe, Radio Free Asia and other US government–funded media—halted some $2 million worth of contracts for projects whose stated purpose was to protect the digital privacy of demonstrators. These included a “cybersecurity incident response team” to analyze “Chinese surveillance techniques,” as well as a “rapid response fund” for protesters deemed to be monitored by the Chinese government.

A major Western publication’s confirmation that the US government was directly sponsoring the Hong Kong protests would seem to be a pivotal development. This both corroborates the Chinese Foreign Ministry’s claims of external intervention in the protests (Xinhua, 5/23/20) and sheds light on US media’s glowing portrayals of the protests (FAIR.org, 10/26/19, 12/6/19). Yet the issue, according to US media, isn’t that a government body intended to fund these demonstrations in the first place; it’s that Pack prevented it from doing so.

USAGM’s funding was channeled through a little-known offshoot called the Open Technology Fund (OTF). Arguably best-known for funding encrypted messaging apps like Signal and web browsers like Tor, OTF originated as a pilot program within Radio Free Asia in 2012 and was classified in 2019 as an “independent nonprofit” USAGM grantee. Under USAGM’s authority, OTF planned to furnish demonstrators with technology to “evade surveillance by the Chinese government,” according to Time.

After the publication of the Time article, a number of news sources lamented the funding freeze, along with a series of high-profile USAGM firings under Pack’s command, asserting that OTF’s continued financing of the Hong Kong protests was the USAGM’s journalistic imperative. 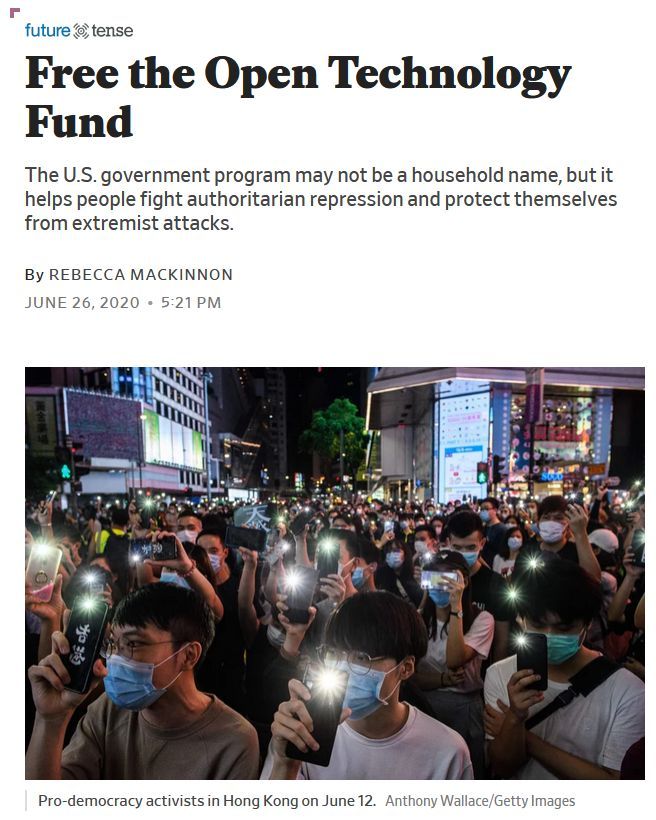 Slate (6/26/20) describes the US government–funded Open Technology Fund as “helping everybody everywhere who dares to speak truth to power.”

A recent Slate piece (6/26/20) headlined “Free the Open Technology Fund” criticized Pack from the right, cautioning that OTF’s “work must be allowed to continue. To do otherwise will be a gift to the Chinese Communist Party and autocrats around the world.” Reuters (7/2/20), meanwhile, fretted:

Digital rights activists and researchers now worry that the turmoil at the OTF could threaten people living in authoritarian countries who rely on the organization to help them navigate censorship and evade surveillance.

Here, “authoritarian countries” appears to signify Iran and China, which have become prime targets of warmongering US media. (See FAIR.org, 7/2/19, 5/15/20.)

Media’s displeasure was compounded by Pack’s reported plan for the software itself. According to Slate, Pack may have sought to replace the OTF’s open-source privacy technology with a closed-source alternative designed by members of the far-right Chinese opposition group Falun Gong. Unlike open-source software, closed-source software can’t be examined or audited by independent researchers, rendering an application potentially less secure.

The story’s author, Rebecca MacKinnon—the director of a US State Department–funded program within the think tank New America—justifiably bemoaned the prospect of using a Falun Gong–associated tool. But, rather than offering a moral critique of the US for its international meddling, MacKinnon focused on Pack’s inefficacy in subverting the Chinese government:

Funding Falun Gong tools would be a good way to reward political loyalty: Since 2016 the Falun Gong–affiliated Epoch Times has become an enthusiastic member of Trump’s social media cheerleading squad. But if the objective is actually to undermine the Chinese Communist Party, firing OTF’s top leadership with the intent to change the organization’s funding scope and strategy makes little sense. To anybody with knowledge of OTF’s programs and community, it is clear that a radical overhaul of OTF’s funding strategy would be a win for the CCP. 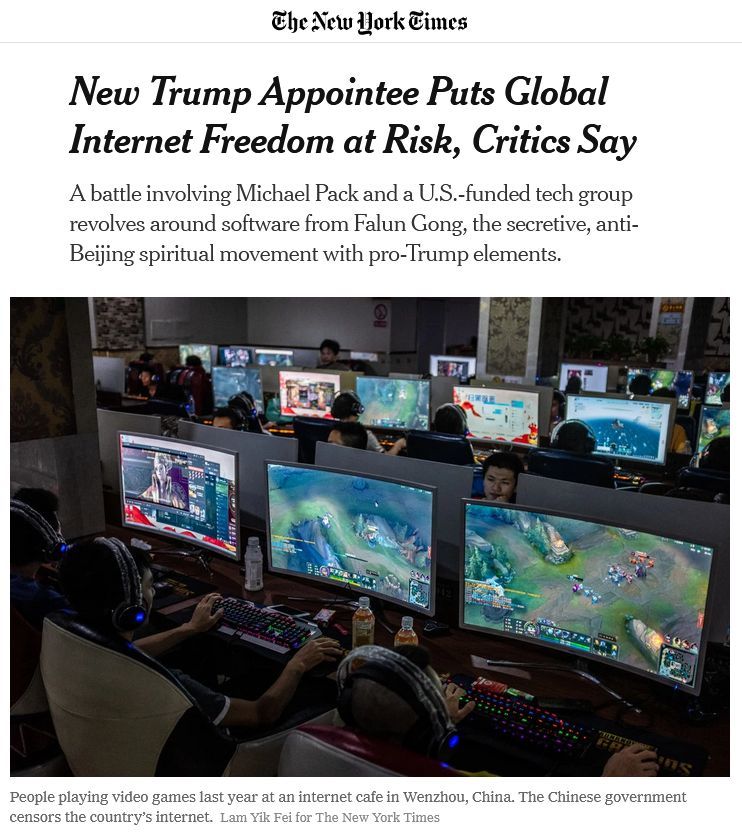 The New York Times (7/4/20) offered a similar, if more muted, defense of the OTF. Describing the organization’s work as “incubating new technology that promotes human rights and open societies,” the Times cited pro-US “internet freedom” experts to warn of the failures of closed-source technology as a tool of US intervention. These included MacKinnon, the founder of an OTF-funded cybersecurity nonprofit called Kandoo, and the executive director of the OTF-funded Tor Project, which the Timescalled a “nonprofit digital privacy group.” Nowhere was the US’s involvement in the protests, or in Hong Kong/Mainland China relations more broadly, questioned.

Additionally, conceptions of “open societies,” “internet freedom” and “digital privacy” are far from neutral in US media framings of Hong Kong and Beijing. Building the case for US intervention, media have lambasted China’s alleged surveillance of Hong Kong protesters for months—however speculative those accusations are. Last year, the Atlantic (8/30/19), CNN (9/9/19) and Business Insider (8/26/19), among other publications, reported that Hong Kong protesters were toppling “smart lampposts” in order to circumvent suspected facial recognition. No outlets could offer proof that the lampposts were spying on protesters: The Atlantic conceded that the lampposts’ facial-recognition capabilities had “not been proved or debunked,” while CNN reported that there was “no evidence that the government’s new lamp posts are a cover for increased surveillance.” Official reports, moreover, indicated that the lampposts were solely meant to collect data on air quality, traffic and weather.

Demonstrators in the US, conversely, face unequivocal, expansive surveillance from police and governments. Instances abound of law enforcement monitoring protesters of police violence. The stakes are high: Police have injured and killed numerous people during protests, laying bare the dire need for protection from digital tracking. Of the deaths reported during the Hong Kong protests, none have been credibly attributed to police.

To the OTF’s credit, antiracist activists in the US have adopted Signal as a privacy tool. But while US media champions institutional support for the Hong Kong protests, it neglects to do the same for those in the US. If, per the above US media, USAGM is obliged to support the right to “free expression” for Hong Kong demonstrators, who haven’t faced fatal state violence, why isn’t the same true for US demonstrators, who have? If it’s part of a news outlet’s job to aid dissenters, through privacy protection or other means, why aren’t NPR, CNN and the like providing cybersecurity and “rapid response funds” for antiracist protesters domestically?

Discrepancies like these further discredit media’s characterization of USAGM as a bastion of journalistic merit. Earlier this year, corporate media expressed fears that Pack would compromise the USAGM’s “quality journalism and editorial independence”—fears that ignore the agency’s adherence to the US state line. Informing their current international coverage, Voice of America and the Radio Free media properties have a decades-long history of targeting socialist and Communist countries on behalf of the US; USAGM has previously crowed about its anti-Communist interceptions in China and the Soviet Union. (See FAIR.org, 5/21/20.)

According to multiple reports, USAGM reinstated OTF’s funding after the publication of the Time article. Had the funding suspension remained, the New York Times hypothesized, it “would have dealt a potential blow to Hong Kong’s pro-democracy movement.” Tellingly, a number of Republican policymakers would agree: On July 1, hawkish reactionaries Marco Rubio and Lindsey Graham cosigned a letter that threatened to “review” USAGM funding and chastised Pack for weakening the agency’s ability to produce “credible journalism” and “cultivate a free and open world.”

It might seem odd that US corporate media, with the vehement support of conservative lawmakers, would equate the USAGM’s success in intervening in the politics of Hong Kong with journalistic integrity. After all, isn’t traditional Western journalism supposed to uphold the virtues of neutrality, impartiality and a refusal to uncritically accept government directives? For the New York Times and its ilk, the answer is apparently no—at least not when it comes to the US foreign policy consensus.

Julianne Tveten’s work has appeared in In These Times, The Nation, The New Republic, Pacifica Radio and elsewhere.