How NOT to Resist Trump: Kayleigh McEnany’s Anti-Science Comments

Yes, the White House is against science. No, McEnany didn’t say it like that. 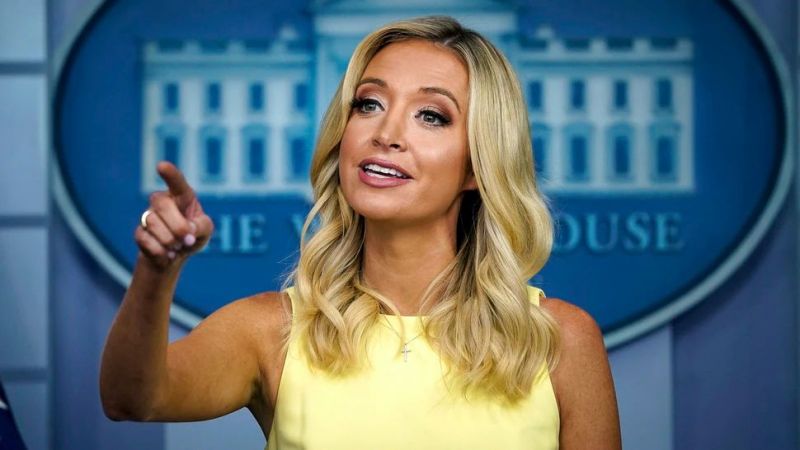 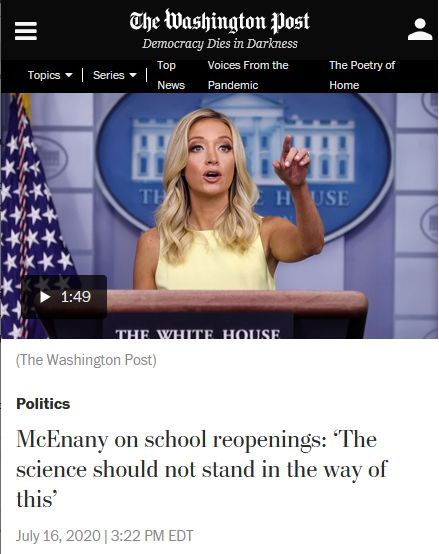 Media, particularly those who have made a habit of rhetorically opposing Donald Trump for the past four years, were awash last week with White House press secretary Kayleigh McEnany’s controversial statements on reopening public schools in the middle of a pandemic. For example:

The myriad of viral headlines suggested that this was another Orwellian outburst from the administration, along the lines of when George H. W. Bush said: “I’ll never apologize for the United States of America. Ever! I don’t care what the facts are.” But reading her full answer, or watching the video embedded in many of the reports, it becomes clear that the headlines are misrepresenting McEnany’s words. What she actually said was:

The president has said unmistakably that he wants schools to open. And I was just in the Oval [Office] talking to him about that. And when he says open, he means open in full — kids being able to attend each and every day at their school. The science should not stand in the way of this.

And as Dr. Scott Atlas said — I thought this was a good quote — Of course, we can [do it].  Everyone else in the…Western world, our peer nations are doing it. We are the outlier here.

The science is very clear on this, that — you know, for instance, you look at the JAMA Pediatrics study of 46 pediatric hospitals in North America that said the risk of critical illness from COVID is far less for children than that of seasonal flu. The science is on our side here, and we encourage for localities and states to just simply follow the science, open our schools.

In other words, the White House is arguing that the science shouldn’t be a problem because it doesn’t stand in their way. But this is certainly not how it was presented to the public by many journalistic outlets.

Some outlets did give a fuller explanation of McEnany’s comments. MSNBC (7/17/20), for example, noted that, “To many, that made it sound as if the White House press secretary was arguing that science was an impediment to Donald Trump’s preference,” before explaining that the true context “casts McEnany’s controversial quote in a less embarrassing light.” Yet the headline for the article explaining the confusion was “White House: ‘Science Should Not Stand in the Way’ of School Openings,’” which only served to double the muddle.

Around 59% of people do not read past the headline before sharing an article, making it especially important that they convey accurate information. A majority of people seeing these headlines will have been given a misleading picture of events. 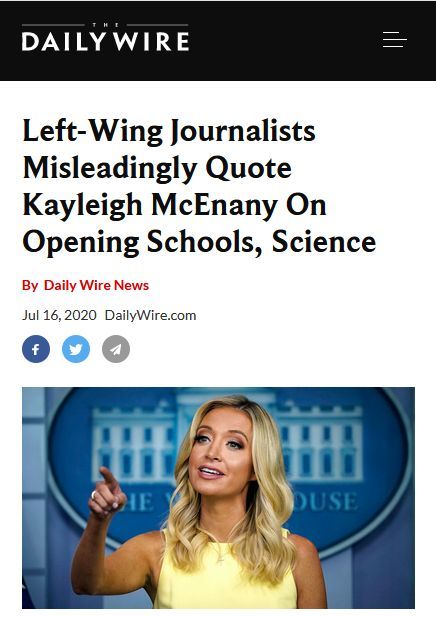 The Daily Wire (7/17/20) used the McEnany quote as an opportunity to go after “left-wing journalists.”

The media mishandling of McEnany’s remarks led to a field day for the right-wing press, portraying the Trump administration as unfairly under attack from the leftist establishment (e.g., Daily Caller, 7/17/20; Daily Wire, 7/17/20; National Review, 7/17/20). “The shameless charlatans in the liberal media were at it again on Thursday, engaging in fake news,” wrote Newsbusters(7/16/20). “The entire corporate media complex have conspired to deliberately lie and mislead the public,” Breitbart(7/17/20) told its readers.

I said: “The science is very clear on this…the science is on our side here. We encourage our localities & states to just simply follow the science. Open our schools.” But leave it to the media to deceptively suggest I was making the opposite point!

The problem with this narrative, of course, is that her comments were anti-science. A huge new study from the Center for Disease Control (CDC) itself, released the same day as McEnany’s comments, found that children aged 10–19 (i.e., kids in elementary, middle and high school) spread the disease at least as well as adults do, meaning any reopening will certainly worsen the situation, leading to deaths, not necessarily of students, but of teachers, grandparents, other public transport users, or anyone else coming into contact with them.

Pretending that opening schools has no consequences for adults is itself deeply misleading. While some other Western nations have reopened schools, they have done so in a context of drastically reduced new cases; in many instances, virtually zero. On July 16, the day of McEnany’s comments, the United States set a worldwide all-time high for new daily cases, 73,388. Comparing the US to the likes of Germany or New Zealand (July 16 cases: 560 and one, respectively) is scientific malpractice.

Not only did other Western countries wait until their infection rates were much lower before reopening schools, they also took great care to reduce the chances that schoolchildren would transmit the virus to themselves or others. Time (7/20/20) described how Denmark reopened schools on April 15, when the country was averaging 30 new cases per million people per day (compared to the US’s current 202 cases per million per day):

When children ages 2–12 returned to school, they were sectioned off into “micro groups” of 12. These groups—also known as “protective bubbles”—arrive to school at staggered times, eat lunch separately and have their own zones in the playground. All students are required to wash their hands every two hours but do not have to wear face masks. Desks are divided two meters apart, all education material must be cleaned twice a day and when possible, classes are held outside. Parents are not allowed on school property. 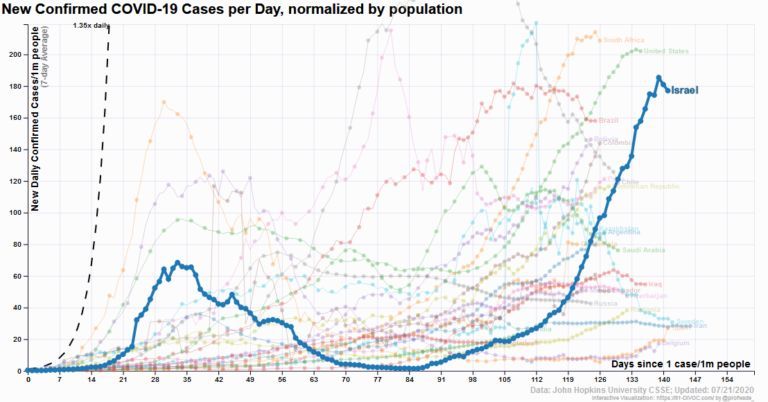 Transmission in reopened schools is blamed for a dramatic resurgence of Covid-19 in Israel (chart: 91-DIVOC).

Some countries that reopened schools with less stringent protocols have come to regret it. “Israelis Fear Schools Reopened Too Soon as Covid-19 Cases Climb” was a July 14 headline in the Wall Street Journal, with the subhead, “Outbreaks in Schools Had Infected at Least 1,335 Students and 691 Staff by Monday Since the Reopening in Early May.”

Just as the pandemic began, the Trump administration attempted to slash the CDC’s budget, the president in February brushing off the idea that Covid-19 would be worse than the flu as a liberal “hoax” intended to unseat him. After accepting its validity, he touted ineffective drugs as miracle cures and even suggested that injecting bleach into the body could cure the sick. This is in keeping with the administration’s general contempt for sciences, such as its grossly downplaying the threat of climate change, with Trump himself labeling it a Chinese invention, while claiming the noise from wind farms causes cancer.

Unfortunately, this latest scandal perfectly encapsulates much of corporate media’s apparent resistance to Trump, in that it avoids a substantive critique in favor of catching the administration out on technical grounds. Resisting the reopening of schools on the basis that the White House press secretary misspoke represents a lost opportunity to actually oppose the administration’s scandalously poor handling of the coronavirus, and the dangerous, genuinely anti-science decision to force through reopening in the height of a pandemic.

Most US adults, including more than nine in ten Republicans, say they have lost trust in the media in recent years. This sort of sloppy faux-adversarial journalism in the pursuit of clicks will do nothing to reverse this trend. Is further eroding your industry’s credibility worth a few more eyeballs? Apparently, the answer is yes.

Alan MacLeod @AlanRMacLeod is a member of the Glasgow University Media Group. His latest book, Propaganda in the Information Age: Still Manufacturing Consent, was published by Routledge in May 2019.

The Great American Firewall: On the Question of Censorship

China, QAnon Censorship, And Other Notes From The Edge Of The Narrative Matrix