Print this post.
Please make sure these dispatches reach as many readers as possible. Share with kin, friends and workmates and ask them to do likewise.
Paul Edwards
(First released on April 5, 2019)

With the Putin/Russia Collusion Fairytale debunked, the undeniable cancer of real foreign interference in our government demands an honest airing.
Since American politics is mortally corrupt, one might wonder why bother to expose one prime cause of its ethical degeneracy.  If the beast is dead, what use is determining what killed it?  Well, it isn’t quite dead and we have to live with it.  If the public knew one country has done more to subvert our government than all others combined it might raise enough hell to stop it. 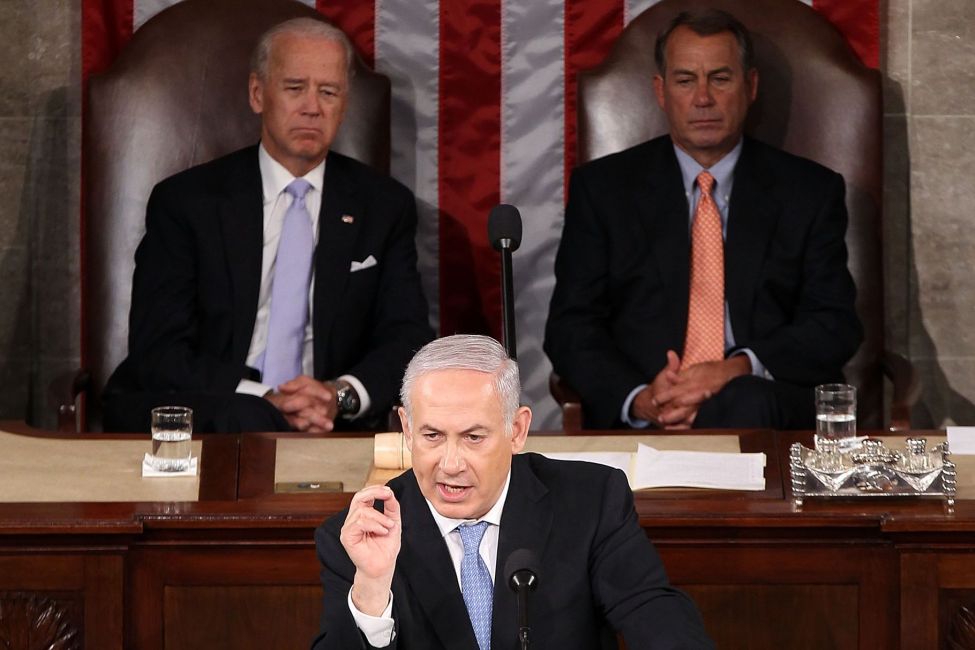 Israel PM B. Netanyahu admonishing a Joint Session of the US Congress in 2015—the third time he had done so. Although it happened on Obama's watch, the invitation had been first negotiated by the Republicans. (Getty Images)

In terms of influence, there can be no serious denial that Israel exerts by far the most powerful suasion of any foreign power on America.  Influence exerted by a foreign power’s registered lobby is legitimate per our toothless  protocol.  Israel’s is not so registered, but... details, details.  So, when Republicans invite Bibi to smarmily insult a sitting President in a joint session of Congress, that’s influence, not interference.  When, besides financing most Senators and Representatives elections, Israel takes them on cushy, free PR junkets to Tel Aviv, that’s influence, not interference.

Conversely, when Clintonista subversion of the Sanders campaign appears on Wikileaks and is instantly imputed to Russia and Putin--without proof and against expert technical evidence--that’s not influence, it’s Russki interference.  More absurdly, when--again, without proof--the same Dem CFOs howl that Putin Trolls bought chump change worth of dingy ads on Facebook that swung the election to Trump that’s... but you get the picture.

What is obvious and has long been so--and has been emphasized by two years of fraud and insanity regarding imagined Russian collusion--is that influence is what your friends have; interference is what your enemies do.

Why, when it is so blatantly obvious as to be a source of outspoken pride for them, is the fact that Israel’s right-wing ruling clique brazenly and continually interferes in American government in the most aggressive and offensive way, universally denied?  You want flagrant foreign collusion with high officials in U.S. government?  Open your eyes.  And your mind...

The reason it’s officially denied is that Israel’s Congressional whores know that not to do so violates their deal.  Not to back Israel unquestioningly  terminates it, and the loss of that money means loss of office... to say nothing of the beating they’d take in the press and on their reputations.

The great mass of Americans won’t admit what many can’t help but know because they, too, fear being attacked for such bold honesty.  They are equally vulnerable to rough handling from the same source: the massively powerful Israel Lobby, a unified phalanx of militant American Zionists.

To be clear: Zionism has always insisted that Israel exists for Jews only.

The Israel Lobby--financed by vast American Zionist wealth--potent as it is, could not leverage our politics if its tactics were exposed, and it knows it.   History gives it the key that makes rational assessment of Israel’s policies impossible: the Holocaust and the true anti-Semitism that was its cause.

Evocation of that horror allows any critique of Israeli government to be sleazily labelled Anti-Semitism, and so to effectively nullify argument.  The dishonest and cynical Israel Lobby uses this tactic shamelessly to blunt and derail sound criticism or even plain examination of Israeli state behavior.

What then is Anti-Semitism?  By definition it is antipathy or hatred of the Jewish people as a whole.  An Anti-Semite espouses that categorical prejudice, and Anti-Semitism in word or deed pertains to Jews in toto.  In contrast, behavior that is ugly, hateful, or injurious but not directed at Jews as a whole, though execrable, is not Anti-Semitic, just as it’s possible to hate a Catholic or Muslim without hating their religion or their people.

It follows then, that criticism, even vicious, hateful criticism of the Israeli State, is not inherently Anti-Semitic, and the claim is false on its face.  To attack the Israeli State is not to attack Jews as a people since Israel is not home to most of Jewry and its polity by no means defines or represents Jews in all their broad, complex range of beliefs, practices, and principles.

To say that criticizing the brutal, repressive apartheid Israeli government’s actions is Anti-Semitic is no more legitimate than to say that condemnation of the American State’s vicious imperialist wars makes one anti-American.

This disingenuous con needs to be named and refuted around the world.

Is there criticism of Israel that is clearly Anti-Semitic?  Of course, there is!  Plenty of it.  Anti-Semitism is no less real and evil because it does not apply to all critiques of Israel or all insults to Jews or Jewish entities.  Precisely because Anti-Semitism is so vile and toxic a disease, and because it will continue to live in its odious carriers, it is critically important not to vitiate the ubiquitous contempt it arouses by cynically muddling its meaning.

The dishonest and defensive crying of wolf that the government of Israel and the Israel Lobby deploy against any criticism of their history and policy is, in addition to being morally contemptible, deeply counterproductive in terms of Israel’s standing in world opinion.  Mounting a transparently false, blanket, all-purpose lament as a cover for their most obvious and glaring crimes and cruelties cannot prevent the world from seeing them for the corrupt and unjust power they are and fiercely, adamantly opposing them.

Beyond the damage Israel’s cowardly dishonesty does to itself, a more critical concern for Americans concerns what it has done and is doing to exacerbate the rolling debacle of our misruled and floundering country.  The Israel Lobby, Zionism’s American voice, wielding the bogus trope of  Anti-Semitism as a club, infects and pollutes through its agents and activists every niche of our government from the Presidency and Congress, to Federal Departments and Bureaus, to State and local offices.

Without Zionist acceptance Trump would not have been President, but neither would Obama.  Through the Lobby’s diligence we have made our country hated by carrying Israel’s dirty water in the Middle East, crippled and hamstrung enlightened policy at home, and been afflicted with such creatures of nightmare as the Harpy, Nikki Haley, bughouse pseudo-Christian loon, Mike Pompeo, and murderous psychopath, John Bolton.

Nothing suggests the death grip Israel and its Lobby have on our fate can be broken.  So long as the Anti-Semitic Con is viable, even our security is in jeopardy with its blind, sick, demented chosen monsters in charge.

The fable of the eagle and scorpion comes painfully to mind.  When the bird, stung and bearing them both down to death, asks how the scorpion could sting it after swearing not to do so, it replies, “You knew what I was when you let me ride.”  It was all too clear what Israel was in 1947. 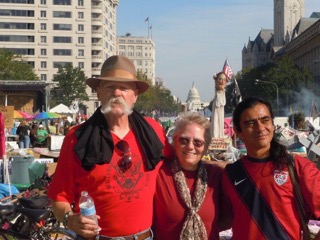 Paul Edwards, a Senior Contributing Editor, is a genuine Renaissance man, gifted with many talents and participant in many events and struggles of our tormented times. Our colleague Jeff Brown, who did a fine interview with him, sums it up thusly: “Paul’s life story is worthy of a biography: a rebel youth growing up, traveling and working around the world and then a long career as a Hollywood writer. Through it all, he has never lost his lifelong wrath against US imperialism and global capitalism, while seeking social and economic justice for humanity’s 99%…”
Our colleague Michael K. Smith sent us the following quote, which I find an apt addendum to Paul Edwards's terrific essay on this page:
" . . . there's a quick way of figuring out just how badly Israel is behaving . . . You see a brisk uptick in the number of articles here accusing the left of anti-Semitism.  These articles adopt varying strategies, but the most obvious one is that nowhere in them is there much sign that the author feels it necessary to concede that Israel is a racist state whose obvious and provable intent is to continue to steal Palestinian land, oppress Palestinians, herd them into smaller and smaller enclaves and ultimately drive them into the sea or Lebanon or Jordan or Dearborn or the space in Dallas-Fort Worth airport between the third and fourth runways. .. . The real problem is that most Jews here don't like hearing bad things said about Israel, same way they don't like reading articles about the Jewish lobby here. . . . Anti-Semitism has become like a flit gun to squirt at every inconvenient fly on the window pane."

—Alexander Cockburn, My Life as an "Anti-Semite"

ALL CAPTIONS AND PULL QUOTES BY THE EDITORS NOT THE AUTHORS
0 0 votes
Article Rating
All comments subject to anti-hacking filters.
0 comment 1 FacebookTwitterPinterestLinkedinVKRedditWhatsappTelegramEmail
previous post