HELP ENLIGHTEN YOUR FELLOWS. BE SURE TO PASS THIS ON. SURVIVAL DEPENDS ON IT.
Vladimir Danilov / NEO 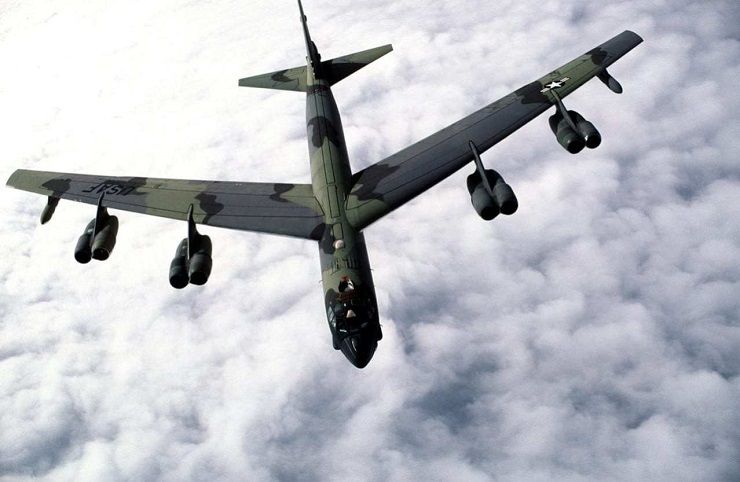 The aging, but still iconic B-52, remains a nuclear capable delivery platform.

In 2015, during his speech at the Brookings Institution (a US research group that conducts studies and education on economics and politics), the former Chair of the Federal Reserve, Ben Bernanke talked about whether a victorious war and an active preparation to one could become the best means for bringing the US economy from the looming crisis, especially since it is the military spending of war times that helps reap the most benefits (in terms of employment, flow of funds in national financial system, trade competitiveness and, therefore, GDP).

In this context, it is important to remember that the US became a world power in part because of its arms trade during the First and Second World Wars. The US supplied weapons to Great Britain, France, the USSR and other allied powers. US gold reserves increased during both the wars as allies, at times, paid for the supplies they needed in gold and many countries wanted to store their reserves in a safe location. The Bretton Woods agreement of 1944 allowed the world to slowly transition from a gold standard to a US dollar standard, which, undoubtedly, boosted the US economy.

Unfortunately, reaping the benefits of war has, in recent years, started to play an ever increasing role in policies of the current US administration. And such an approach appears to have become even more relevant nowadays in light of the current economic crisis in the US and the decline in its hegemony in various parts of the world.

“...the undeniable reality is that the United States and its NATO allies are crowding Russia, not that Russia is crowding the United States”.
. At present, Washington is benefitting from armed conflicts (that the United States often plays an active role in) in the Middle East, which not only generate revenue for the US military industrial complex but also have a negative impact on USA’s rivals, i.e. Europe, China and Asian nations — the biggest consumers of oil from this volatile region. At present, the EU is part of the US war machine on account of the way NATO (the North Atlantic Treaty Organization) is structured. Europeans, therefore, rely on their American allies in battle, since European armies, for example, have no early warning and control aircraft or satellite-borne surveillance and navigation systems of their own. In addition, whenever tensions arise, the EU tends to increase arms purchases from the United States. And if a country starts looking for other suppliers, Washington can sanction the “culprit” and/ or threaten to take away its military support.

In order to ensure Europe remains its ally, the United States stokes fears within the EU on a regular basis via US-influenced media outlets and their reports about external enemies. [The appalling corruption of EU politicians, and their active vassalage to Washington is actually the main factor here, and the role played by their media.—Ed) Earlier, the Soviet Union was viewed as the West’s key opponent, but nowadays, the list of foes includes China, North Korea and Iran. In the past, the United States actively supported “the Afghan Mujaheddin insurgents battling the Afghan Marxist government and the Soviet Army,” thus facilitating the formation of Al-Qaeda (ed. note – a terrorist organization banned in the Russian Federation). Later on, another terrorist group, DAESH (also banned in Russia) was established in a similar manner. All of the aforementioned factors prompt Europeans to increase their military spending and buy new weapons and equipment from the United States, thus further enriching USA’s current political elites and the military industrial complex.

It is therefore not surprising that there is still an ongoing crisis on the Korean Peninsula; armed conflicts in the Middle East, Afghanistan and Libya; continuing unrest in Ukraine, and increasing tensions between the United States and China. In fact, the list goes on and on. After all, new or existing conflicts are spreading (at times, with Washington’s active involvement) throughout Asia, Latin America and Europe. And any of them could flare up at the behest of the puppeteers in Washington. It is especially advantageous for Washington if such conflicts happen far from the United States and, therefore, do not result in suffering and misfortune at home.

In the current environment, the United States does not appear to be too keen on using available international legal instruments that could help facilitate the resolution of conflicts in different regions of the world. In fact, Washington has shown a tendency to withdraw from various international agreements with the aim of replacing them with bilateral pacts that take into account mainly US interests (with US laws, i.e. the rule of the strongest, dominating). All of this is evidenced in Washington’s withdrawal from the Iran nuclear deal; its recent exit from the World Health Organization (which is playing an important role during the ongoing Coronavirus pandemic), and its disengagement from the International Court of Justice in the Hague. The latter step has made it increasingly difficult to hold US servicemen legally responsible for any past or future crimes committed against civilians during US interventions.

At present, tensions between the United States and China are intensifying in the South China Sea. In July, US Secretary of State Mike Pompeo “launched yet another evangelical crusade” — against China. “His speech was extremist, simplistic, and dangerous – and may well put the US on a path to conflict with China”. In part due to actions taken by the Trump administration, tensions between the two world powers are rising in diplomatic, trade and commerce, IT and military spheres.

According to US magazine, The National Interest, “there has been a surge of alarming incidents between US and Russian military aircraft” over the past few months, and “most of the interceptions are taking place near Russia and thousands of miles away from the American homeland”. The article has also pointed out that “the undeniable reality is that the United States and its NATO allies are crowding Russia, not that Russia is crowding the United States”.

In the meantime, the United States is seemingly continuing with its preparation for a global confrontation. On August 28, six US Air Force B-52Н Stratofortress strategic bombers, built to carry nuclear weapons, flew over all 30 NATO nations in Europe. This single-day mission, titled Allied Sky, “was intended to demonstrate NATO solidarity, enhance readiness and provide training opportunities aimed at enhancing interoperability for all participating aircrews from the US and NATO allies”. In addition, in an interview with Fox News at the beginning of August, US Secretary of Defense Mark Esper talked about the fact the United States was “moving many troops further east, closer to Russia’s border to deter them”. (sic) It is, therefore, not surprising that the United States and Poland recently signed the Enhanced Defense Cooperation Agreement (EDCA), which “allows US forces access to additional military installations in Poland” (including those located in the east). And last year, the two countries announced that 1,000 more servicemen would be added to the US forces already stationed in Poland. In addition, US troops withdrawn from Germany could be redeployed to Romania “to reinforce NATO’s southeastern flank”. From 2008 to 2012, Estonia’s Ämari Air Base (located approximately 250 km west of the Russian border) “faced a major overhaul of the obsolete base infrastructure”. The work was carried out “in order to link Ämari into the NATO collective air defense system”.

After World War II came to an end, the United States has intervened in dozens of wars and military conflicts. However, Washington was unable to secure a decisive victory in many of them. In fact, it has been said that the US army has won many battles but not necessarily wars. US interventions have brought suffering, death and misfortune to tens of millions of civilians world-wide. At the same time, they also helped generate income for the US military industrial complex. Thus, in many parts of the world, animosity towards the United States keeps growing.

Vladimir Danilov is a political observer and geopolitical analyst with a focus on "big power confrontation".