VOICES OF THE TRUE LEFT
Streams of clarity, irony, humor and wisdom seen & overheard on the Net
Dispatch dateline 8 Oct 2020 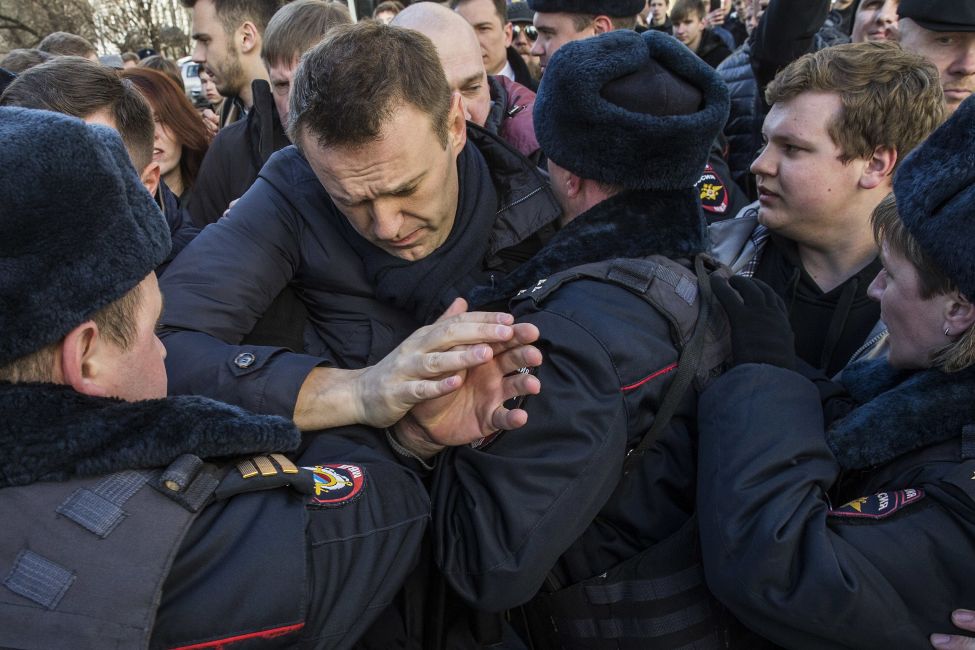 Navalny resisting arrest in 2017. Many such acts are essentially photo-ops for the benefit of Western propaganda. NED graduates and color revolt assets quickly learn how to work the media.

Alexey Navalny is now grand-standing against the Russian government, as he often does, announcing he plans to sue Dmitry Peskov, the Kremlin Spokesman for suggesting he worked with US intelligence. Navalny proclaimed: “You know, I very rarely take propagandists to court, even though they lie about me all day long. I simply don’t want to waste time. However, this is a direct statement from a government official. Therefore, firstly, I’m filing a lawsuit against Peskov… I demand the publication of evidence and facts that point to ‘work with CIA specialists.’ Show it on television directly, during prime time. I’m giving you permission.”

There’s a reason Navalny has decided to theatrically throw up his arms. To those who are unfamiliar with the late cold war, and how geopolitical games are played by superpowers, Navalny seems correct. He clearly is not James Bond 007. He’s not wearing fake mustaches, engaging in assassinations and saving beautiful blonde supermodels.

However, outside of Hollywood, the kind or work that Navalny has engaged in as western capitalism’s favorite Russian dissident, is vitally important to intelligence agencies. Navalny has stated that he has no real intention of working within Russia’s established legal and constitutional mechanisms to bring about reform. Instead he is engaging in what he calls “street and network activism” and “direct action.” He’s also received quite a hefty sum of anonymous and crypto-currency contributions in order to do it.

His behavior comes straight out of the Zbiegnew Brzezinski, George Soros “late cold war” playbook. If one is curious as to why the CIA might be backing Navalny’s disruptions of Russian society, they should read Frank Kitson’s classic book “Gangs and Counter-Gangs” about how the British operated in Kenya, or perhaps the more recent writings of William S. Lind on the concept of “Fourth Generation Warfare” published by the US Marine Corps.

NAVALNY'S TIES TO THE CIA THROUGH ITS FRONT THE NED ARE WELL KNOWN AND DOCUMENTED
Navalny's connection with the National Endowment for Democracy (NED), run by free market zealot Carl Gersham since 1984, a regime change tool created by the CIA to conduct deep infiltration and destabilisation work practically in the open as a harmless NGO, was even mentioned in Navalny's Wikipedia page until recently, but now it is curiously missing.  In the Orwellian world of US intelligence and media, the fact the NED is constantly at work to promote savage capitalism and not political freedom or true democracy, and that it officially regards the establishment of neonazi regimes such as the one currently disgracing Ukraine or Bolivia as "accomplishments" says volumes about its real nature. Below a couple of quotes illuminating Navalny's political complexion. Few PC western liberals would approve of Navalny if they only knew the man is an unrepentant racist and proud reactionary. Such details are of course routinely expunged from the Western media accolades.

Navalny is a right-wing populist. No doubt. But I would submit he’s more of an American variety than a European facsimile. His xenophobia comes with an anti-elitist élan tinged with a libertarian distrust of big government. If Navalny ran in a US election, he’d find common cause with the Tea Party. He’d make an excellent Fox News pundit if he added flamboyancy to his abrasiveness.

Exploring the possibility of a ‘Russian Maidan’

The political front that will take to Russia’s streets has already long been identified. It includes the same brand of extreme “nationalists” and ultra-right groups seen overrunning Ukraine’s political order. This includes literal Neo-Nazis. One of the prevailing figures among Russia’s ultra-right is US-backed Alexey Navalny – billed by the West as an “anti-corruption activist,” who is in all reality a neo-fascist operating openly in the service of Wall Street.

Alexey Navalny was a Yale World Fellow, and in his profile it states: Navalny spearheads legal challenges on behalf of minority shareholders in large Russian companies, including Gazprom, Bank VTB, Sberbank, Rosneft, Transneft, and Surgutneftegaz, through the Union of Minority Shareholders… Navalny is also co-founder of the Democratic Alternativemovement…

The Democratic Alternative, also written DA!, is a US State Department National Endowment for Democracy (NED) fund recipient, implicating Alexey Navalny as an agent of US-funded sedition. The US State Department itself reveals this as they list DA! among many of the “youth movements” they support operating in Russia…

That this funding is nowhere on NED’s official website indicates that full disclosures are not being made and that NED is engaged in clandestine funding.

The use of “non-state actors,” i.e. “activists,” fanatics, religious cults, and political cadre organizations has been key in destabilizing countries and securing Washington’s economic and political domination of the planet. George Soros funneled money to all sorts of dissidents across the Eastern Bloc. Often these confused dissidents, with funding and publicity from western media mysteriously enabling their efforts, called themselves “democratic socialists” or advocates of “socialism with a human face.” However, in reality, they functioned as “useful idiots” for western capitalism, marching for “human rights” in order to pave the way for the economic wrecking ball of the IMF and World Bank to destroy the lives of their countryfolk.

Russia has many dissidents, of both leftist and right-wing persuasions. The Communist Party holds seats in the Duma and has long criticized Putin’s leadership. The Liberal Democratic Party is equally critical, and also holds elected office.

However, Navalny’s slick “dissent” seems to follow an odd pattern of serving Wall Street’s short-term needs. For example, the latest unproven but widespread claim that Navalny has been intentionally poisoned by the Russian government, comes just on the brink of the final stages of the Nordstream 2 pipeline project. Just as Germany is on the brink of buying loads of natural gas from Russia, and more closely solidifying its economic relationship with Russia, Navalny is in the headlines again.

The White House is very open about its drive for “energy dominance.” Washington wants Germans to import their natural gas from US fracking and energy corporations, not from their Russian neighbors.

The fact that Navalny’s “activism” so clearly follows the twists and turns of US foreign policy talking points, has caused the Ministry of Justice to declare Navalny’s “Fight Against Corruption” non-profit to be “acting as a foreign agent.” Of course, Navalny is crying foul. Declaring himself the “victim” of a “dictatorship” is a big part of the propaganda surrounding his image.

However, simply looking at the facts seems to indicate that saying the CIA and other western intelligence agencies are utilizing his efforts is not a stretch of the imagination by any means.

Caleb Maupin is a journalist and political analyst who resides in New York City. Originally from Ohio, he studied political science at Baldwin-Wallace College. In addition to his journalism, analysis, and commentary, he has engaged in political activism. He was a youth organizer for the International Action Center and was involved in the Occupy Wall Street movement from its planning stages in August of 2011. He has worked against police brutality, mass incarceration, and imperialist war. He works to promote revolutionary ideology, and to support all who fight against the global system of monopoly capitalist imperialism.
All captions & pull quotes by the editors, not the authors (unless stated).

Freedom of the press on trial: Max Blumenthal and Ben Norton speak about the dystopian show trial going on against political prisoner Julian Assange with journalist Kevin Gosztola

How Exceptional America Is