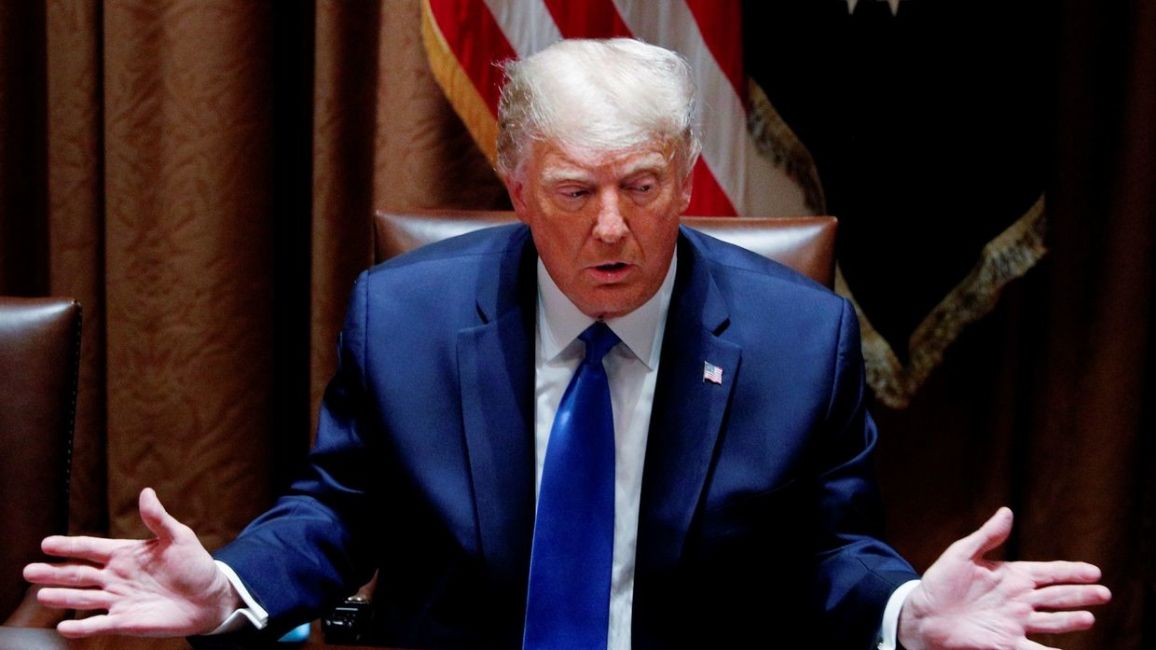 Trump at the White House. Marketing con man to the end, he normally dresses using the primary colors of the American flag.

President Trump’s anti-Chinese rhetoric is getting harsher as the election approaches. Trailing in the polls, he has nothing to lose by ramping up the blame game on Beijing.

Donald Trump has gone into overdrive in a bid to demonstrate that Covid-19 has not personally weakened him or troubled him, irrespective of the facts or the safety of others.

Standing on the White House lawn on Wednesday evening, the president said that his trouble with the virus was a “blessing from God” and subsequently stated aggressively that responsibility for the episode lies with Beijing, and that he would “make China pay” for his trouble.

With the virus having claimed more than 200,000 lives in the US, the president’s response has been based around tactics which have involved such political blame games – while politically resisting the need to take further measures – as well as resorting to outright denial, saying the virus is “just another flu” and downplaying its impact.

The former is used when he has to deal with serious consequences, and the latter to justify taking no action, favoring the economy above people’s lives.

However, there seems little doubt that the president’s own personal battle with the virus and the subsequent infections throughout the White House have been wholly detrimental to his electoral campaign.

Whether Trump likes it or not, his handling of the situation has reinforced the impression of incompetence, recklessness and chaos. So, it is no surprise that his solution is to pour scorn and blame on Beijing, as has been the case for a long time. But, after vowing China will pay, the question is what action will be taken? And can it save his faltering campaign?

The China blame game can be attributed to the fact that Covid-19 destroyed Trump’s entire electoral strategy, which was to keep things calm and stable while focusing on positive economic results. This also underpinned Trump’s widely documented effort to play the virus down at first and even his praise of China.

However, the pandemic decimated the US economy and generated record unemployment. This left the administration with the political space to pursue only one tactic; to deflect and whip up nationalist anger against China and portray Beijing as responsible for everything that had gone wrong.

As a result, since July, the US administration has introduced a steady stream of weekly sanctions and measures against China and espoused aggressive Cold War rhetoric. These include sanctions over Hong Kong (including the cancellation of its special status), aggressive blacklisting of Chinese companies, escalation of tensions in the South China Sea, more measures against Huawei, the closure of a Chinese consulate, attempts to ban WeChat and TikTok, deportation of Chinese students, upgrading of ties with Taiwan and so on. Now he says he plans to use tariffs on China if he gets a second term.

ALSO ON RT.COM  We’re no longer in the century of humiliation! Why China will not cave in to Trump’s state extortion over TikTok

The moves are electorally focused, but also represent a move by foreign policy hawks who are forcibly shifting the paradigm of US-China relations to a hostile stance in likely anticipation of losing the election.

While nothing can be ruled out, it seems probable by now that the focus on China is not translating into electoral gain. And even if American voters do blame Beijing for the pandemic, research finds that foreign policy only comes sixth in terms of importance as an issue to voters behind the economy, healthcare, Supreme Court appointments, the handling of the virus itself, and violent crime.

When China is singled out as an electoral issue, even fewer voters said it would be decisive in determining their choice, with only one in five selecting it. Given that this is despite all Trump’s nationalistic bluster, there is no evidence whatsoever that China-bashing or blaming Beijing can divert from the domestic criticism or get him over the line.

Despite this, the president’s anti-China rhetoric will continue and as the election moves closer it is likely he could double down. Trump’s personality and political stratagem has long focused on deliberately igniting drama and crisis to court publicity for himself and dictate the news agenda to his own liking.

One cannot rule out that in making such threats, Trump may subsequently ramp up tensions even further to try to create a ‘rallying effect’ or attempt to provoke Beijing into a standoff on an issue such as Taiwan or the South China Sea. Let’s put it this way;’ he has absolutely nothing to lose in doing so.

If there are any short-term fallouts for the US economy or markets and he wins the election, he can address them later. If he loses, then it’s Joe Biden’s problem. And again, that is part of the reason why the administration is pushing so hard – to immortalize its legacy in the paradigm of US foreign policy so that the succeeding administration has to follow it, then dismantle it.

And as for Biden? He certainly will be no dove on China. While he may be less reckless, destructive and confrontational than Trump in handling Beijing, based on his campaign rhetoric so far, there’s little doubt that he will place the new theme of ‘strategic competition’ with China at the heart of US foreign policy. Nor is he likely to reverse many of the measures the current White House has placed on China in recent months.

Given this, Trump’s China-bashing rhetoric has a dual purpose: it is both electoral and strategic. It’s not just about deflecting blame, but justifying a foreign policy agenda with a view to the long term, and that shouldn’t be underestimated.

Tom Fowdy is a British writer and analyst of politics and international relations with a primary focus on East Asia.
RevisShielded: 23,981

No 2nd stimulus? Time to admit both parties want to destroy the average American

The Shoddiness of ‘Big Think’ Media