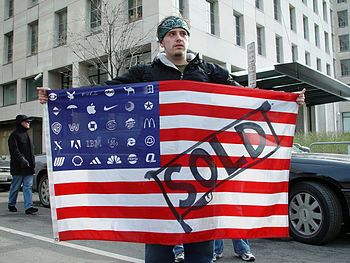 I am greatly disturbed when I hear people using the words “we” and “us” to refer to our government. Indeed, I am so disturbed that generally I can’t hear anything else they say after that; I am too distracted. Their usage both reveals and perpetuates an attitude of passivity, helplessness, and nonresistance. It suggests that our government actually represents us, which in fact it does not. Also it suggests that you and I are not capable of action or thought on our own — that our identities and our will are wholly swallowed up by the handful of plutocrats in Washington. Perpetuating that attitude is a huge mistake. We need to make a conceptual distinction between “me” and “my government,” and that distinction begins with our choice of words. Changing our linguistic habits takes time and effort, but it gets easier with practice, and this is not a trivial matter — indeed, this stuff is extremely important.

The biggest counter-argument I get about this involves paying taxes. If “we” pay taxes, then aren’t “we” complicit in all the government’s terrible crimes? I like to answer by talking about the Resistance during the Nazi occupation of France. The members of the Resistance paid their taxes to the Nazi-controlled government, because they felt they could resist more effectively from outside of prison than from inside it. You have to know which battles to fight. But when the members of the Resistance were talking just among themselves, they did not say “we are rounding up the Jews.” Which side are you on?

Perhaps this analogy makes the point clearer. Imagine that someone from the mafia knocks on your door, and tells you that from now on you must pay them a certain amount of money, or they will break both your legs and kill your son. And imagine that you live in a neighborhood where the police aren’t very helpful about protecting you from the mafia. So it would be understandable if you start paying the mafia regularly. Still, I don’t think you will use the word “we” when referring to the mafia’s activities — e.g., you won’t say to your spouse, “hey, did you hear about the new whorehouse we opened at the other end of town last week?”

Language is not just a neutral carrier of information. It affects how we think. Here is another example of that: In Orwell’s novel “1984” (published in 1949), the totalitarian government’s military branch was called the Ministry of Peace (or MinPax, for short). Shortly after that novel was published, the US Department of War was renamed as the Department of “Defense,”to make it easier for USers to believe that their soldiers were always “the good guys” in all of the many wars that the USA started. It has been a very effective tactic. But I’m trying to get into the habit of writing the word “Defense” in quotes.

Also, I try to avoid using the word “terrorist” altogether, because its meaning is determined solely by whoever is speaking. Martin Luther King Jr called the USA “the greatest purveyor of violence in the world,” and that’s still true now.

It takes a lot of time and practice to change your use of words like “we” and “defense” and “terrorist.” But it has a big impact on how people think, so it’s worth doing. Please choose your words carefully.

Eric Schechter,
a special contributing editor at The Greanville Post,  is a Mathematics professor emeritus at Vanderbilt University.  He maintains a Facebook page at https://www.facebook.com/eric.schechter.7509. He blogs at https://leftymathprof.wordpress.com/
RevisShielded: 18,189

Liberalism and Fascism: Partners in Crime