A dispatch from teleSUR
JODIE EVANS 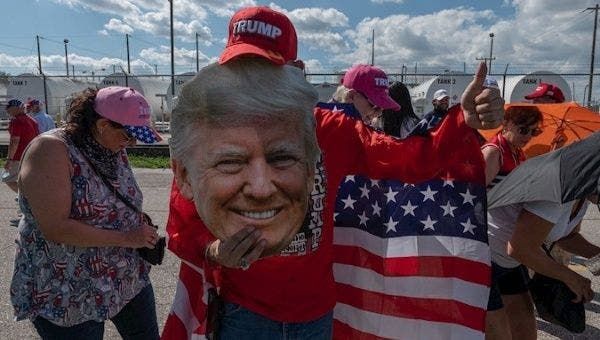 Who are these people, so stubbornly immune to fact and reason? What does Trump have to do to prove he's a cynical charlatan, and, like Biden, a betrayer of their interests, dreams and aspirations?(Supporters of Donald Trump at Sanford Airport, Florida, U.S., Oct. 12, 2020. | Photo: EFE)

OPINION
Neither of the ruling parties in the United States has tried to end the electoral college and the control that it gives the elite and the billionaire class.

It is three more weeks until November 3rd, the election day in the United States. Ballots are already out in California, but that doesn’t really matter because of the electoral college.

Four years ago, California voted 4 million votes against Donald Trump, so Joe Biden is already counting on us. The electoral college was created by the white Founding Fathers to protect their private property when they were slaveholders.

They were too afraid that real democracy might interrupt their power. Nowadays, we are still under that form, which is not a direct democracy like we are seeing in the streets across the U.S. with the uprising against George Floyd’s murder, yet another flashpoint for activists in centuries of racism.

The votes are tallied for each State, and whoever gets the majority gets all the delegates for that state. That margin is very close in only a few states we call the "swing states", which are Michigan, Wisconsin, Pennsylvania, North Carolina, Arizona, and Florida.

“The only catch: What would happen if Trump's Cuban-American supporters ever found out?” https://t.co/5ONkUSPCIi

That is why the Republican candidate Trump is trying to destroy Venezuela and Cuba. He is trying to win votes in Florida. Can you imagine? Starving people to death to win a presidency?

Neither of the ruling parties in the United States has tried to end the electoral college and the control that it gives the elite and the billionaire class.

Nor has either of the parties said anything about what they are going to do to help 70.000 homeless people in Los Angeles. They didn’t get their ballots by mail. They are totally cut out of the process.

JODIE EVANS is the co-founder of CODEPINK and the after-school writing program 826LA.  She has been a visionary advocate for peace for several decades. An inspired motivator, Jodie invigorates nascent activists and re-invigorates seasoned activists through her ever-evolving, always exciting methods to promote peace.
[post-views]

As American Society Crashes and Burns, the Cult of Neoliberalism Marches on