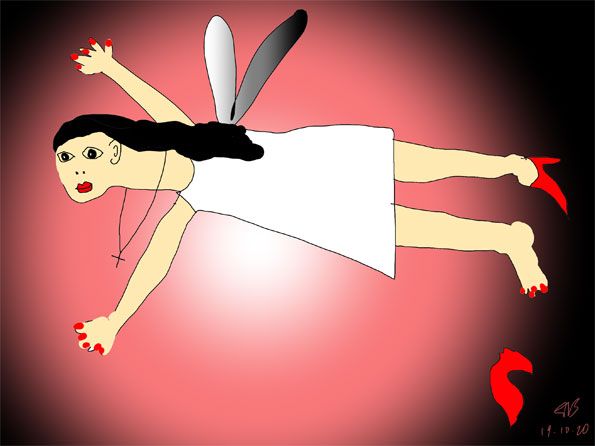 Leading an unhealthy lifestyle for taking a large amount of toxic crystal meth and alcohol every night, bar girls in Vietnam face extremely high risks to their heath in the near future. However, they have to accept the job because of fat earnings.

Vietnamese people use ‘fly’ to refer to the feeling of getting high, so girls that serve drug abusers in bars are called ‘flying girls.’
It is similar to ‘hugging girls” referring to those serving beer to customers at restaurants, karaoke bars or parties. In recent years, ‘flying girls’ have become a familiar term to playboys.

At overnight parties, they are arranged to ‘fly’ with guests by joining their dangerous games like using crystal meth, ketamine, laughing gas or weed. According to Ngan ‘Ca Mau’ – a retired ‘flying girl’ – it took her a whole week to recover from one night of ‘flying.’ “It is so detrimental to our health, but the worst thing is that it will dull our brain,” Ngan ‘Ca Mau’ said, her name deriving from her hometown Ca Mau, located in the southern tip of mainland Vietnam. “We can’t tell right from wrong anymore.”

The age of ‘flying girls’
Several bars in Ho Chi Minh City are places where abusers can buy ‘candy’ – slang for crystal meth – and ‘tray,’ or ketamine, which is considered an illegal drug in Vietnam. These substances make them tolerate strident music at the bars. Without the effects of the drugs, one can hardly ever withstand the volume of the music there. A ‘candy’ is a little pill to be swallowed, while ‘tray’ is a kind of white powder put neatly inside tiny plastic bags.

Abusers smash ‘tray’ on a banknote and burn it lightly before inhaling it. As Tuoi Tre (Youth) newspaper’s undercover reporter approached, Mai Thuy, a 28-year-old ‘flying girl,’ opened up about her job. “Using ketamine is very simple. You place it in line along a banknote, then inhale it,” she said. Users will be either too exhausted or too excited after taking the drug. They can dance crazily and hug everyone, even a stranger. That is why ketamine is called a magic pill. It can make two strangers kiss each other wildly.

The correspondent followed Sau, an experienced drug user in Ho Chi Minh City, to some ‘flying houses.’ From what he observed, once people have taken ‘candy’ and ‘tray,’ their bodies can go wild without the need for food or sleep. What they need for a good ‘party’ are simply some bottles of water, soft drinks, and a blanket, as their body temperatures drop quickly after the substances kick in. However, as things wear off, their bodies will feel extremely hot. Binh, one of Sau’s minions, said that ketamine abusers hate using electric fans as they may blow the powder away. “The powder always has to be kept in dry places without any winds. It’s the most valuable thing in the room,” he said.

According to these experienced drug abusers, ‘flying girls’ have been around in Ho Chi Minh City since the beginning of this century. They were seen at bars and discotheques at first. Later on, some foreigners and overseas Vietnamese helped popularize these substances among karaoke bars and restaurants and service girls had their share, too. Business owners quickly caught the trend and illegally opened their private ‘flying rooms’ to service playboys and drug abusers. Ever since, drugs and money have turned a lot of service girls into ‘flying girls.’

‘Fly’ and ‘no-fly’
“Are all girls here ready to take drugs?” asked the correspondent. “No, they aren’t. Some of them were scared to death. But some took to it like a duck to water after only one try,” said Mai Thuy. Most ‘flying girls,’ Thuy said, use an iPhone, with the Soundcloud app installed. They use this app for very modern dance songs. If their phone cover is removed, there must be some new banknotes, which will be used for heating ketamine. Thuy explained that there were two types of girls in her bar. “The ‘fly girls’ and the ‘no-fly girls,’” she said. “The ‘no-fly girls’ go to work very early, and they simply sit with their customers and allow themselves to be hugged. “The ‘fly girls’ only get to their ‘workplace’ from 5:00 pm to 6:00 pm, but their shift can last till 3:00-4:00 am or even 9:00-10:00 am the next morning as long as their customers require.”

Certainly, those agreeing to ‘fly’ make a lot more money. They can earn as much as a dozen million dong (US$500) a night if they are lucky enough. Some of the girls took a very firm stance against drug use at first, but they got talked into it by their peers later. Some were drugged, and then became addicts. The ‘flying girls’ even have different work schedules. Some are permanently positioned at a certain restaurant, while others only give ‘flying’ service when they are called. Restaurant ‘flying girls’ have a constant source of customers every day, but they have to abide by their owner’s timetable. They also get protection when there is a sudden check of law enforcement forces. Freelance ‘flying girls,’ on the other hand, can take a rest any time they want. Yet, they will have to fend for themselves in case of unexpected problems.

Being a ‘flying girl’ is not at all a bed of roses. “Don’t think if you get a rich guy to pay you, then you’re lucky. Sometimes you get touched by five men, sometimes they don’t even pay you. It happens frequently,” said Mai Thuy. She showed the reporter very deep cuts on her wrists. She cut herself every time she felt like quitting the job. And she smiled in tears. * *