Print this post.
Please make sure these dispatches reach as many readers as possible. Share with kin, friends and workmates and ask them to do likewise.
Philip Giraldi 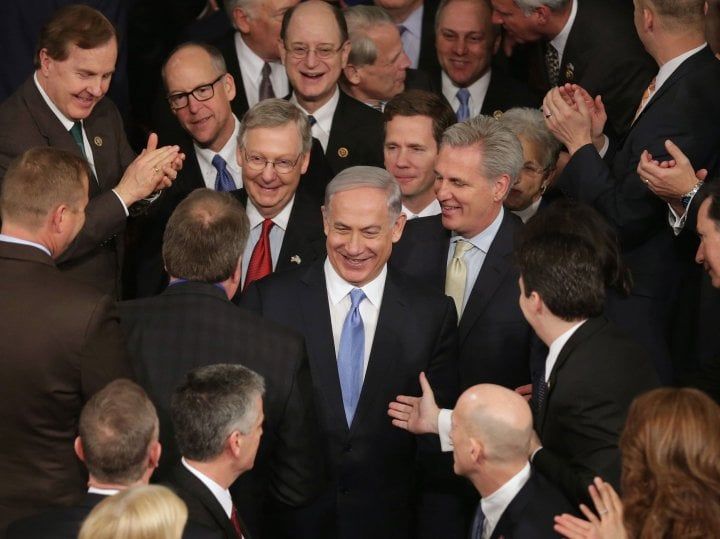 B. Netanyahu, the representative from Israel, warmly received by his fellows in the US Congress.

Congress and White House work together to reward the Jewish state

The U.S. election will end today, more or less, and we Americans will suffer another four years of putting up with serial nonsense out of a White House and Congress that could care less about us no matter who is elected. Whether the party where everything changes or the party where everything remains the same wins the inevitable result will be further aggrandizement of authoritarian power combined with increased distancing of government from the people who are ruled.

Amidst all the gloom, however, there is one great success story. That is the tale of how Israel and its friends in politics and financial circles have been able to screw every possible advantage out of both major parties simultaneously and apparently effortlessly. Israel might be the true undisputed winner in the 2020 election even though it was not on the ballot and was hardly mentioned at all during the campaign.

Jewish billionaires with close ties to Israel have been courted by the two major parties, both to come up with contributions and to urge their friends in the oligarch club and media to also respond favorably. The Democrats’ largest single donor is entertainment mogul Haim Saban while the Republicans rely on casino multi-billionaire Sheldon Adelson. It is estimated that 60% of the political contributions for the Democrats comes from Jewish sources and Saban is the single largest contributor. He is also an Israeli holding dual citizenship. Adelson, who may also hold dual citizenship and is married to an Israeli, is the major supporter of the Republicans, having coughed up more than $100 million in recent elections.

Both Saban and Adelson have not been shy about supporting Israel as their first priority. Saban is on record as supporting Joe Biden “because of his track record on supporting Israel and its alliance with the United States.” Adelson, who was drafted into the U.S. Army in the 1950s, has said that he would much rather have served in the Israel Defense Force. Saban and Adelson are joined in their love fest with Israel by a number of Israel-firsters in Congress and the Administration, all eager to shower unlimited political support, money and weapons on the Jewish state.

In the latest manifestation of noblesse oblige, Secretary of Defense Mark Esper stopped off in Israel last week to present his counterparts with a significant bit of assistance, all funded by the American taxpayer, of course. According to sources in Washington and Jerusalem, the U.S. “will grant Israel direct access to highly classified satellites such as the missile detection birds known as SBIRS and ensure Israel gets critical defense platforms in a very short time by using production slots planned for the U.S armed forces.” Israel will also be given “deeper access to the core avionic systems” of the new F-35 fighter that it has been obtaining from Washington. 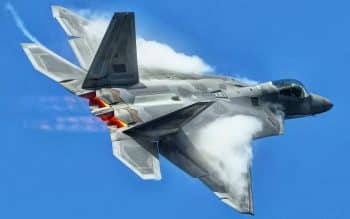 Lockheed Martin F-22 Raptor, one of America's most advanced warplanes, and one of the costliest—until the F-35.  But the Russians have created equal and even superior aircraft.

The claimed rationale for the upgrade is the Congressionally mandated requirement for the U.S. to maintain Israel’s “qualitative military edge” in light of the impending sale of the F-35 to Arab states that have recently established diplomatic relations with Israel. At the time, Israeli sources were suggesting that the Jewish state might need $8 billion in new military hardware upgrades to maintain its advantage over its neighbors. It is presumed that the American taxpayer will foot the bill, even though there is a serious financial crisis going on in the U.S.

The satellite detection system operates from aerial platforms that are deployed on helicopters. The astute reader will notice that no U.S. security interest is involved in the latest giveaway to Israel. On the contrary, Israel will be receiving material from “production slots planned for the U.S. armed forces,” reducing America’s own ability to detect incoming missiles. And there will also be considerable damage to American defense interests in that Israel will inevitably steal the advanced F-35 technology that they will be given access to, re-engineer it for their own defense industries and sell it to clients in Asia, Africa, and Latin America. They have done so before, selling U.S. developed missile technology to China.

Congress is also doing its bit. A bill, the so-called “U.S.-Israel Common Defense Authorization Act,” is making its way through the House of Representatives and will authorize the provision of U.S. manufactured bunker buster bombs to Israel. As the bombs would only be useful in Israel’s neighborhood to bomb hardened sites in Iran, the message being sent is obvious. The Massive Ordnance Penetrator weighs 30,000 pounds and is capable of destroying targets located deep underground. Oddly, Israel doesn’t have a plane capable of carrying that weight so the presumption is that the White House will also have to provide the bomber. The bill is co-sponsored by two leading Israel firsters in Congress Democrat Josh Gottheimer of New Jersey and Republican Brian Mast of Florida.

Israel is also seeking an upgrade of some of its other fighter aircraft. It reportedly has approached the Pentagon seeking to buy the Lockheed Martin F-22 Raptor, a single-seat, twin-engine, all-weather stealth tactical fighter aircraft that was originally developed for the United States Air Force (USAF). Its stealth capability, top speed, maneuverability combined with advanced air-to-air and air-to-ground weapon systems, makes it the best air superiority fighter in the world.

Unfortunately for Israel, the F-22 is not currently available and is only operated by the USAF. Current U.S. federal law prohibits the export of the plane to anyone to protect its top secret advanced stealth technology as well as a number of advances in weaponry and situational awareness. But if deference to Israel’s wishes is anything to go by, one might safely bet that the Jewish state will have received approval to acquire the plane by inauguration day in January. And it is a safe bet that Israeli defense contractors will have reverse engineered the stealth and other features soon thereafter.

The U.S. government has been pandering to Israel in other ways, to include labeling, and sanctioning, prominent human rights groups that have criticized the Jewish state as anti-Semitic. It has also strengthened existing sanctions against Iranian financial institutions , reportedly in an attempt to make it more difficult for a President Biden to reinstate the suspended Joint Comprehensive Plan of Action (JCPOA) that sought to monitor the Iranian nuclear program. The sanctions come on top of other moves to destroy the Iranian economy, to include “…that the U.S., along with Israel, has in recent months carried out sabotage attacks inside Iran, destroying power plants, aluminum and chemical factories, a medical clinic and 7 ships at the port of Bushehr…”Other recent developments favoring Israel include Congress’s legislating Israeli government veto authority over U.S. sales of weapons to any other Middle Eastern nation. The bill is called “Guaranteeing Israel’s QME [Qualitative Military Edge] Act of 2020” (H.R. 8494). There has also been the expansion by Executive Order of U.S. funded illegal West Bank Jewish settlements’ science development projects that will eventually compete with American companies.

In truth, the United States has become Israel’s bitch and there is hardly a politician or journalist who has the courage to say so. Congress and the media have been so corrupted by money emanating from the Israeli lobby that they cannot do enough to satisfy America’s rulers in Jerusalem. And for those who do not succumb to the money there is always intimidation, career-ending weaponized accusations of holocaust-denial and anti-Semitism. It is all designed to produce one result: whoever wins in American elections doesn’t matter as long as Israel gets what it wants. And it almost always gets what it wants.

Philip M. Giraldi, Ph.D., is Executive Director of the Council for the National Interest, a 501(c)3 tax deductible educational foundation (Federal ID Number #52-1739023) that seeks a more interests-based U.S. foreign policy in the Middle East. Website is https://councilforthenationalinterest.org, address is P.O. Box 2157, Purcellville VA 20134.
Up to You.

Rachel Maddow endorses regime change in Venezuela to “push Russia back,” sympathizes with Bolton and Pompeo

Caleb Maupin: The US is today’s like 16th Century Spain resisting the (inevitable) birth of a new order