November 10, 2020 9 minutes read
Please make sure these dispatches reach as many readers as possible. Share with kin, friends and workmates and ask them to do likewise.

The war over Nagorno-Karabakh has ended for now. The Armenian Autonomous Oblast within Azerbaijan will continue to exist with Russian peacekeepers currently deploying to control its borders. Most of the Armenian-occupied territories will be handed back to Azerbaijan. A Russian controlled land corridor will connect Nagorno-Karabakh with Armenia. 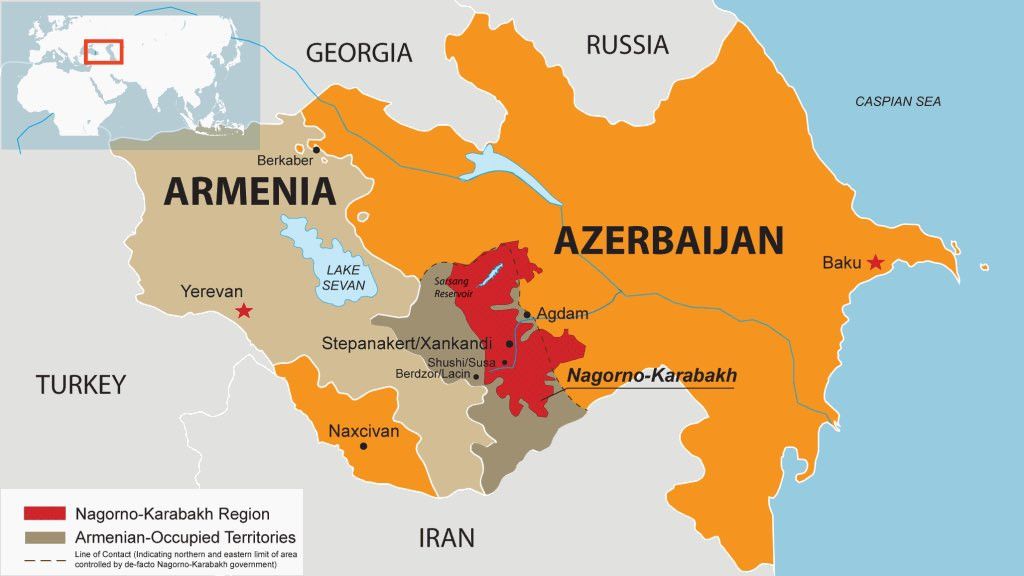 This is the outcome that Russia had long proposed during previous peace negotiations.

Armenia, under the western-installed Prime Minister Pashinyan, has barely managed to defend the ethnic enclave. Azerbaijan did not achieve its hoped for control over all of Nagorno-Karabakh.

Azerbaijan, with its wealth of gas and oil money, had been able to arm itself with hundreds of drones from Turkey and Israel that allowed it to achieve air superiority. The Armenian defenders were not trained to sufficiently camouflage themselves from air threats. Their old air defenses were not capable enough to detect and defend against small drones. They therefore lost hundreds of tanks and artillery pieces to suicide drone attacks.

Azerbaijan, and the contingent of 'moderate rebels' mercenaries it had rented from Turkey, failed to invade the mountainous core of Nagorno-Karabakh. They lost several thousand men, many more than the defending Armenians, while trying to do that. 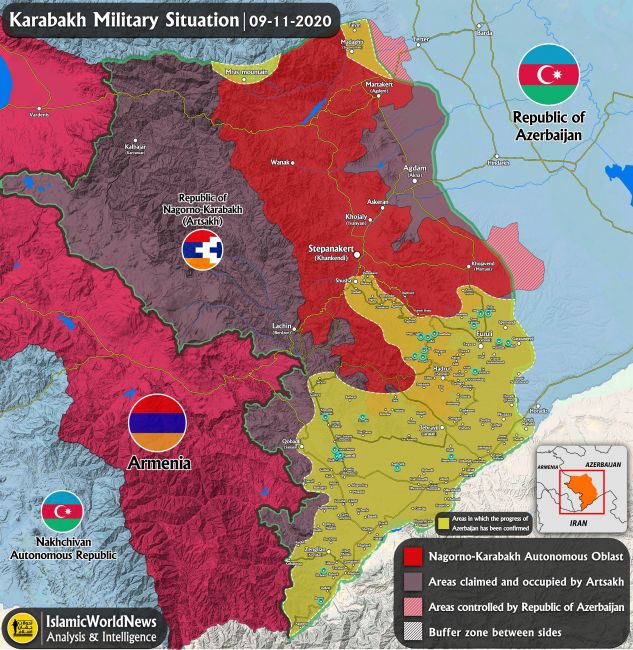 After the announcement of the ceasefire Armenians stormed government buildings in Yerevan. Prime Minister Pashinyan, who had neglected the military while trying to make nice with the 'west', is likely to get removed from his office.

With this outcome Russia has strengthened its position in the Caucasus while Turkey's attempt to insert itself into the region had only limited success.

Armenia could have the whole of Nagorno-Karabakh had it negotiated early. Pashinyan didn't budge, Russia waited till he was on backfoot and the inevitable happened - it lost territory in proper NK itself.

The corridor arrangement bet NK-Armenia and the one bet Azerbaijan & Nakhchivan is a master arrangement. Both interest to opposite sides - mean they will be forced to respect the Agreement.

Russia increases its foothold in Caucasus.

Thank you for the report and update.. What I don't understand is what is the outcome relative to Isreal Saudi, China, USA.. who won what? Turkey, the UN representative, lost to Russia.. Russia lost a pilot and Turkey gained by its lost of 1000 or so useless mercenaries.. Looks to me like the oil and gas pipeline jocks in Israel, Saudi, and Russia won the war..

Thank you b. Plus the three nations of Armenia, Azerbaijan and Russia have quickly neutered further shenanigans by Turkey as USAi proxy to kick off another aggressive assault on Iran/Russia.

Another month and this could have spun out of their control. The USAi transition between Presidents is a rare moment for magic.

Relevant to this subject, The Duran discusses Putin 'slowing down', and gaze the tea leaves that suggest a successor is on the horizon 1-2 yrs from now, with Putin possibly transitioning to an emeritus position in upper house of Douma.

What about the conflicting reports of Turkey also deploying 'peacekeepers'?

Is it just Baku's and Turkish propaganda for domestic consumption, or is the denial of Turkey's involvement the propaganda from Russia, painting a more palatable picture that doesn't involve Nato troops and jihadist mercenaries settling in between Russia and Iran for the next 30 years?

This was just another tussle in the ongoing war on Russia using entire nations and entire armies as useless idiots.

Asking who won, who lost, who gained, who slipped is like watching a n MMA match and asking who won after every single punch, each block, each kick, each slip, and each fall.

We are watching just another page in the anglo-zio book of war, this one chalked down to testing your servants who would be sultans, testing their war machines, drones, rifles, soldiers and generals. At a minimum, some people gained war-fighting experience, some people died, some people learned how not to make 5-D chess moves against Russia.

Love the way Putin / Lavrov moves so steadily, holding their nerve, biding their time, striking at the optimal moment ( Crimea, anybody? )

But then, it is a black and white, win-lose world in the West, that marvellously "civilised" place where there are only good guys and bad guys, no room for nuance nor compromise nor win-win possibilities.

Except for a very few educated minds, this is what I glean from reading blogs like this one.

With this outcome Russia has strengthened its position in the Caucasus while Turkey's attempt to insert itself into the region had only limited success.

Russia continues to be the defining force in the Caucasus but Turkey has made inroads, the Sultan is on a spree and dreaming about the Caspian and further, Kazkhastan, with talks about forming a Turkic military alliance. The agreement guarantees two corridors, one from Artsakh to Armenia guarded by Russian peace keepers, and another one from Nakhichivan to Azerbaijan with Russian customs guards, but that is an open road from Turkey to Azerbaijan and beyond which is was Turkey was looking for. The fact that the agreement is for a five year period guarantees the Russian bases in Armenia proper. The big losers: the OpenNGO's that installed Pashinian to start with, another colorRev that goes sour and of course, causes the deaths of thousands plus destruction. Russia could not play its hand any other way, the historial links with both parties are centuries old and Russia could not afford loosing any one of them. So the results are acceptable but not ideal, plus a lot of military people must be analizing drone warfare.

One can only marvel at Putin's tactical and political genius. He is matchless among his peers, probably the last of his kind.

I concur. Putin shows his mettle again. Like watching an adult let two kids fight for a while until he sees it's time to separate them. And a sensible settlement that might last more than a week and even eventually settle things. Another example of Putin's minimalism, to go with Georgia, Syria and Ukraine.

Don't assume Turkey/Erodgan is losing here, it appears Turkey is leaving Syria, bit by bit, and the restoration of Azerbaijani territory is payback for acknowledging Syria's claims. Perhaps, in light of the Armenian PMs getting western ideas Putin offered Turky the option to straighten out the boundaries in N-K in exchange for getting out of Syria. Erdogan can call it a win, so can Aliyev. Anyway, consider it.

Russian media says there will be no Turkish troops in Artsakh.

The Russian have explained their strategic POV several times, you have rising powers and declining powers. The rising powers want to stall so they can keep rising and the other guy can keep declining. The declining powers want to overturn the board and start a new game. The Russians pursue a policy of strategic patience, stabilization, and development, while maintaining an "adequate" deterrent. They don't need Armenia, they just want it to not be a pain in the butt. Same with Georgia, same with Ukraine. Would prefer to be friends, but not a crisis as long as NATO is not going to be being asinine close by there. It's not containment, it's "area denial", they want to keep us out so we collapse in our own space, and to avoid war. War is a losing proposition. They expect to "win" the war, if it comes, but they know that's not winning. Winning is never having to fire a shot.

Re 7) "So the results are acceptable but not ideal, plus a lot of military people must be analizing drone warfare." I think you meant 'analyzing' but I prefer your term, much closer to the truth.

"Russia continues to be the defining force in the Caucasus but Turkey has made inroads, the Sultan is on a spree and dreaming about the Caspian and further, Kazkhastan, with talks about forming a Turkic military alliance."

Well, Erdogan's son in law & finance minister has just (violently) resigned.
With that slap in the face and the current state of the turkish economy/currency those dreams are a little shaky right now...

Erdogan has to resolve the mess within Turkey before it can afford to "dream" about any foreign involvement :(

Caleb Maupin’s thoughts on the 2020 election