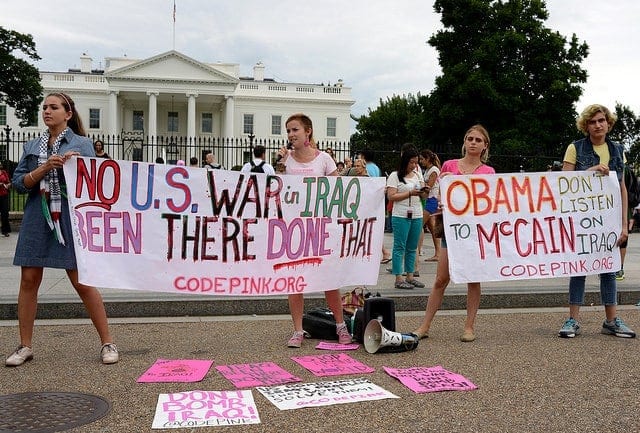 The ramping up to Iraq war elicited large protests, all of which were disregarded.

Both Iraq and Iran have been and are being either sanctioned by or else constantly being threatened by the U.S. Government, though neither Iraq nor Iran ever invaded nor even threatened to invade the United States. This is pure aggression against both Iraq and Iran, and the millions of people who are suffering these constant aggressions are the peoples of Iraq and of Iran. Never does the U.S. Government apologize, and never do any of its allied governments (America’s vassal nations) so much as just suggest that the U.S. Government ought to apologize, for its constant wars of aggression against the peoples of those and of other countries that never threatened America. The U.S. is a constant international outlaw, launching wars of aggression routinely, and the rest of the world remains silent about this, decade after decade.
17 years after America’s conquest of Iraq, the “Gallup Global Emotions Report 2020”, which was just issued on November 19th, finds:
Iraq: The Most Negative Country in the World
After years of posting some of the highest scores in the world on the Negative Experience Index, Iraq topped the list in 2019 with a score of 51. This figure represents a slight increase from its score of 49 in 2018.
The country’s 2019 score reflects the turmoil in Iraq amid some of the largest and bloodiest protests in years. In late 2019, Iraqis’ approval of their country’s leadership plummeted from an already low 22% to just 13%. Nine in 10 Iraqis said corruption was widespread throughout their government.
Negative experiences remained fairly common for most of the population in 2019, with at least roughly half of Iraqis experiencing each of the five experiences in the survey. Notably, Iraqis led the world in experiencing anger — which was on full display in the streets in 2019 and 2020 — with 46% saying they felt a lot of anger the previous day.
No other country posted a Negative Experience Index score higher than Iraq’s, but, as in past years, people in several countries with high negative scores in 2019 were typically contending with some type of turmoil. Many have been at the top of the list for several years, including Chad, which was the most negative country in the world in 2018. However, there were several new appearances in 2019: Rwanda, Afghanistan, Lebanon and Tunisia.
This is nothing new. Gallup’s “Global Emotions Report 2015” said:
Iraq, Iran Top Negative Experience List for Second Consecutive Year
Iraq and Iran have the highest Negative Experience Index scores in the world for the second year in a row. Iraq has been No. 1 on this index three times — in 2011, 2013 and 2014 — and has been among the top five in all other years since 2008. Iran was No. 1 in 2012 and has made at least the top 15 countries in the years when Gallup has conducted surveys there. The presence of Iraq and Iran at the top of the list may not be that surprising given the political and economic turmoil that people in these countries have been experiencing lately, and how strongly related negative scores are to people’s perceptions about their living standards and health problems. In fact, people in most of the countries with the highest negative scores in 2014 were contending with some type of disruption — economic or otherwise — including Liberia, which was dealing with the onset of the Ebola outbreak at the time of the survey.
In that year’s surveys (2014), all ten of the countries that had the “Lowest Negative Experience Index Scores,” except Rwanda, Myanmar, and Taiwan, were countries that prior to 1991 were communist countries, and included both Russia and China.
On 29 September 2015, I headlined about that report,“GALLUP: 'Iraqis Are the Saddest & One of the Angriest Populations in the World',” and closed with “Is Uzbekistan really the best place to live? Anyway, it’s one of the few countries that the U.S. didn’t grab control of, either by outright invasion, or by means of a coup.” All of the ten-best-scoring, and ten worst-scoring, nations, in that report, were listed there.

A mourner walk back from a funeral ceremony for Iranian Gen. Qassem Soleimani and his comrades, who were killed in Iraq in a U.S. drone attack on Friday, passing graffiti on the wall of the former U.S. Embassy in Tehran, Iran, Monday, Jan. 6, 2020. Funeral ceremonies for Soleimani drew a crowd said by police to be in the millions, on Monday in Tehran, where his replacement vowed to take revenge. (AP Photo/Vahid Salemi)

In that 2015 report, Iraq scored as #1 on “negative experiences,” and Iran scored as #2. In the 2020 report, Iraq is again #1 on it, but Iran is now #9 on it. The 2015 report said: “Iraq’s high Negative Experience Index score is largely attributable to the relatively high percentages of Iraqis who report experiencing each of these negative emotions. Majorities of Iraqis experienced worry (62%), physical pain (57%), sadness (57%) and stress (55%) the previous day, and half of Iraqis (50%) said they experienced anger. Iraqis lead the world in experiencing sadness and tie with Iran on anger (49%).” Great going, team America! America’s liar-in-chief, who deceived Americans into invading Iraq, George W. Bush, had a favorable/unfavorable rating of 59%/37%, or a 1.6 net-favorability score, in Gallup’s latest (2017) survey; and the last time when Gallup had surveyed and found at least as high a ratio for him was in January 2004, 65%/35%, or 1.86: his approval by the American people at that time was 1.86 times favorable, as compared to unfavorable. So, Americans simply don’t hold such monstrous lying leaders accountable, at all — not only don’t execute them, but don’t even especially despise them, for the gratuitous vast harms, which such a leader had produced.
Now, five years later, in Gallup’s 2020 report, the ten “Lowest Negative Experiences Worldwide” nations are still dominated by countries that, prior to 1991, were communist. Here is that list, of these ten countries, and their respective “Negative Experience” scores, in the 2019 surveys:
Taiwan 13
Kazakhstan 15
Mongolia 16
Azerbaijan 16
Turkmenistan 17
Poland 17
Estonia 17
Vietnam 18
Malaysia 19
Kyrgyzstan 19
China 19
Again, only two of them had not been communist, but this time a different two: Malaysia and Taiwan.
Here are the 2020 report’s “Highest Negative Experiences Worldwide”:
Iraq 51
Rwanda 49
Afghanistan 48
Chad 48
Lebanon 48
Sierra Leone 48
Guinea 47
Tunisia 46
Iran 45
Togo 45
So: Rwanda went from being the 7th-lowest in the “Negative Experience Index Scores” in 2015, to being the 2nd-highest in the “Negative Experience Index Scores” in 2020. That suggests some type of terrible change in Rwanda during those five years.
Here are the changes in “Lowest Negative Experiences Worldwide” between the 2015 report and the 2020 report:
2015
Uzbekistan 12
China 15
Mongolia 15
Myanmar 15
Russia 15
Taiwan 15
Rwanda 16
Kazakhstan 17
Kyrgyzstan 17
Turkmenistan 18
2020
Taiwan 13
Kazakhstan 15
Mongolia 16
Azerbaijan 16
Turkmenistan 17
Poland 17
Estonia 17
Vietnam 18
Malaysia 19
Kyrgyzstan 19
China 19
Not even the American people benefit from the U.S. Government’s constant invasions, and coups, and economic sanctions, against so many countries that never posed any threat to the U.S. Only America’s billionaires benefit, and too few of those exist for them to show up in any of these “happiness” and “misery” figures from Gallup. They control the U.S. Government and thereby spread misery in so many places, to benefit only themselves.
Investigative historian Eric Zuesse is the author, most recently, of  They’re Not Even Close: The Democratic vs. Republican Economic Records, 1910-2010, and ofCHRIST’S VENTRILOQUISTS: The Event that Created Christianity.
The views expressed are solely those of the author and may or may not reflect those of The Greanville Post