Home AMERICAN BRAINWASH Are There Any Good Cops? 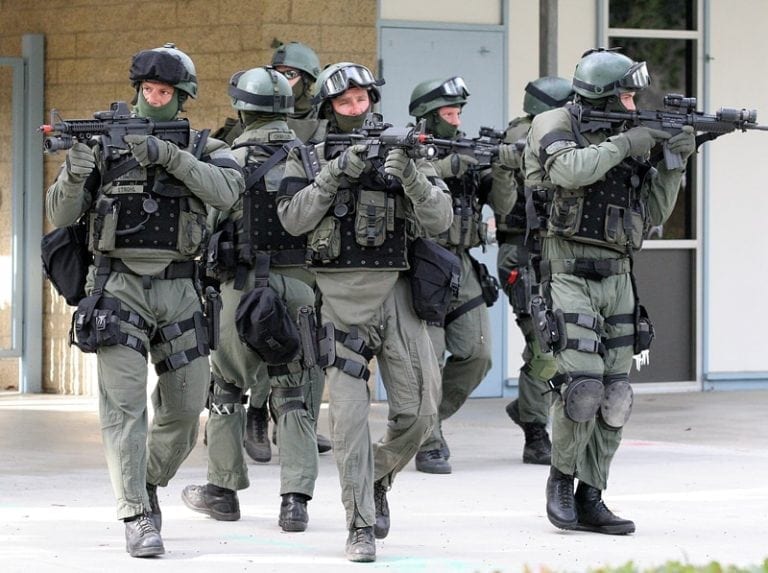 Army or police? It's becoming ever tougher to tell them apart. It's obvious the ruling elites fear urban wars.

Yes, there is a pandemic. And, yes, the COVID-19 numbers and deaths are rising in certain locales. In the Canadian province of Alberta, lockdown measures were put into effect that include shutting all casinos, gyms, dine-in restaurants, and bars. Mask wearing, despite what science says, has been mandated. As well, all outdoor and indoor social gatherings have been banned.

As CJ Hopkins wrote in a excellent essay on the transformation of societies since COVID-19,

The idiocy over the enforcement of COVID-19 lockdown provisions ventured into absurdity when the Calgary police pulled a taser on a young man for the crime of playing ice hockey outside. In an article at Medical Xpress titled “Catching coronavirus outside is rare but not impossible,” it was noted, “Almost all documented coronavirus transmissions have occurred indoors…”

Pandemic aside, police brutality and impunity for police excesses is a disturbing phenomenon that afflicts Canada as well as its southern neighbor, the United States. [1]

Does power corrupt, or is it power that attracts the already corrupted or corruptible?

An essay asked this question: “Are there ‘good’ cops? Of course there are, but the system is against them, and even they are inculcated in the culture of their work, taught the ‘facts of life’ and discouraged from ‘rocking the boat’.”

Imagine that you are a police officer, and you do your job enforcing the law without favor or prejudice. You have no racist bone in your body, and you sympathize with the plight of the poor. However, many of your colleagues are not serving the public good. In fact, they are breaking the law and are criminals themselves. You are aware that your colleagues are committing grave crimes, even murder. You oppose their racism and illegal actions, but you remain silent for whatever reasons. Maybe it is because you believe in the musketeerian one-for-all-and-all-for-one. Or maybe because you are told that it is a union matter, therefore, as a union member you are obligated to let the union handle the matter. Or maybe it is because you fear becoming a black sheep among your colleagues. Maybe you are afraid that you might lose a chance at promotion or, even worse, lose your job. Maybe you have a family and you are the sole breadwinner. Whatever the reason, you remain silent.

You believe in the musketeerian one-for-all-and-all-for-one. Or maybe because you are told that it is a union matter, therefore, as a union member you are obligated to let the union handle the matter. Or maybe it is because you fear becoming a black sheep among your colleagues. Maybe you are afraid that you might lose a chance at promotion or, even worse, lose your job. Maybe you have a family and you are the sole breadwinner. Whatever the reason, you remain silent...

Earlier this month, the BC Prosecution Service declined to pursue criminal charges against seven officers involved in the death of an unarmed man, Myles Gray. CBC reports,

Crown prosecutors say that because of contradictions between the statements of the officers involved and an inability to pinpoint the exact cause of death, they have not been able to establish a clear picture of what happened and therefore do not believe they can prove any of the officers committed manslaughter or assault.

Contradictions or a cover-up?

Yet police are bound by a code of ethics and held to accountability. On paper they are.

Why, then, does the deafening silence, the collusion among police for what seems to be ubiquitous criminality, so often get exculpated by noting there are some good cops?

Is there a good cop? What is a good cop? Can it be that a cop is good who turns a blind eye to evil and speaks not of the evil? Is not the silence of a cop in some salient manner a part of the commission of evil?

Kim Petersen
is a former co-editor of the Dissident Voice newsletter. He can be reached at: kimohp@gmail.com. Twitter: @kimpetersen.