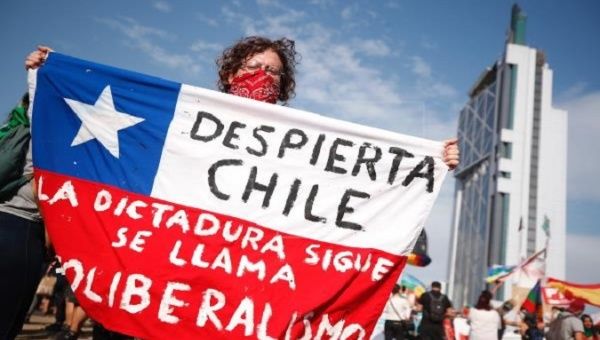 "Despierta Chile!" (Chile Wake Up!) is emblazoned on flag. The protests are likely to continue despite the heightened repression.

First published on Oct 26, 2020
I deeply appreciate David Doel's excellent summary and analysis of the current situation in Chile. Below some additional notes on what is, at best, liable to be a very hard and probably long process. Taking Chile, Bolivia, or any other nation to genuine socialism in the presence of a very virulent US imperialism—however distracted it may momentarily be on account of the pandemic, its self-inflicted super-power confrontations, and the expanding social turmoil at home—is always a major undertaking. The US still has enormous resources at its command, and the  ruling elites and their allies in each of these vassal nations also represent a formidable obstacle to the people's liberation. If history shows anything, it is that revolution is not for the fainthearted or the impatient. Steadfastness in the struggle count as much as intelligence and courage.

After almost 50 years since US henchman Gen. Augusto Pinochet toppled socialist president Salvador Allende on 11 September 1973 to impose a brutal free market model at bayonet point, the country is finally pushing back against this vastly unpopular regime (currently helmed  by Sebastian Piñera, one of Latin America's richest men) to begin laying the groundwork for a truly democratic Chile. If honesty had prevailed on the fake left, such a project would have begun at least three decades ago, when Pinochet relinquished power, but then, again, that is not what the fake left ever does.

From crisis of legitimacy under Pinochet to crisis of representation under the Concertación
Perhaps naively, President Allende had tried to make a revolution relying chiefly on parliamentarism, the "Chilean Way", basically a top-down revolution, but the limitations of this approach, using the bourgeois state playbook and a largely bourgeois Congress to overthrow itself,  soon became evident when national and international capital, led by the US, proceeded to systematically sabotage his proposals, inevitably plunging the nation into severe shortages and social turmoil. It's worth recalling that economic and political sabotage is an old tool of imperialism to maintain its grip on any insolent nation (we see that in abundance these days in the cases of Venezuela, North Korea, Iran and even China and Russia—all subject to illegal sanctions beefed up by trade and information wars). The manufactured chaos was the pretext used by Allende's conservative opponents at home and abroad to justify their internal coup planning. The coup option received the green light, so to speak, when Allende, despite the terrible problems afflicting the whole nation, in fact managed to increase his share of the popular vote in the Chile's midterm elections.  At that point, the native oligarchy, in cahoots with Washington, openly invited the Chilean military to step in to "restore the nation to normalcy and legality (sic)"—that is, the widely despised status quo ante. Not unexpectedly, the plot was endorsed by the Christian Democrats, a center-right party with roots in the Chilean upper- and middle class but with a populistoid message tinged with social christian principles. (Social Christianity was an effort by Catholic sectors of the global ruling class to offer a non-revolutionary type of socialism to co-opt Marxist teachings among the working class.)

Once in power, the Pinochet dictatorship, a proud disciple of Milton Friedman and his gospel of savage capitalism, moved quickly to implement his economic prescriptions, thereby bolstering Chile's grotesque wealth inequality, long inherent in the country's political character as an aristocratic and racialist republic. His rule was supported, as mentioned above, by a strong, fiercely anticommunist layer of the population, comprising, as usual, much of the old aristocracy —in Chile a virtual caste—and members of the upper middle class, not to mention the by now deeply complicit armed forces and police. By 1988, however, when the nation was again becoming ungovernable due a widespread crisis of legitimacy given the regime's runaway corruption and endless human rights abuses, a new mechanism arose, the "conciliation coalition" ("Concertación" (1)) to serve as a possible stabilizing mechanism.

The Concertación fails to deliver
The new Concertación, grouping Christian Democrats, social democrats, and even some reluctant "parliamentary socialists" (plus some figures from the Right that had not been terminally soiled by close affiliation with the military tyranny), initiated a period of formal democratic rule that left practically all of Pinochet's reactionary and neoliberal reforms and policies in place, including a stifling and obviously illegitimate Constitution designed to prevent real change. The Concertación and eventually even the old Right itself governed for the next 30 years (Piñera's regime represents after all the old Pinochet-allied oligarchy), wasting precious time and betraying all promises of social and economic justice advanced in their platforms. The brutal impoverishment and exploitation of the people, the repressive atmosphere sustained by the relative impunity of the military and police, and the cumulative weight of social grievances dating back decades if not centuries, finally provoked the 2019 social explosions, making Chile largely ungovernable once again, and introducing the possibility of a new Constitution and a  new social order based on socialist principles.

When the parties no longer represent their followers
What happens when the people in Congress, the formally elected "representatives of the people", fail to represent the people's needs and aspirations? What happens when parliamentarians are bought and sold by various powerful interests whose desired policies are antithetical to the well-being of ordinary citizens? Representative democracy becomes an empty shell, a "formal democracy". The United States is perhaps the world's foremost example of a formal democracy. (A Wikipedia page in which I explained in detail what a formal democracy is was mysteriously deleted by the Wiki editors. Draw your own conclusions.) As we all know by now, technically in the US, but only technically, there is freedom of speech and to vote and elect various parties or individuals to power, but since the media are controlled by oligarchic interests and so are the only permitted parties and candidates for office, the effect is mostly a democratic illusion, a simulacrum. Nothing changes, except for the worse. This alienates at least one-third of the potential electorate. In fact two respectable non-Marxist political scientists associated with Princeton and Northwestern University pronounced the United States an oligarchy, not a democracy, just six years ago. Marxist political scientists have said the same for the last 150 years. I would add that at this juncture the US is not just an oligarchy, but the most dangerous imperialist oligarchy in history. (2)

In Chile, where the crisis of representation has clearly reached a more acute phase than in the US, we should note that the 2019 protest movement is NOT a "vertical" phenomenon in which the traditional left parties, now also suffering from the representation crisis, provided the leadership or the program. If anything, the parliamentary left parties—including the Communist and Socialist—are "tailing" the movement in the streets. This is a "lateral", horizontal movement, in which the masses consult each other at the grassroots level and decide what approaches to take and what goals and policies to fight for. In that sense, as seen in Bolivia and Venezuela, the political ambit is being primarily shaken and fueled from below. The initiative and implementation of revolutionary action is being dispersed, without becoming anarchism or spontaneism. What is the lesson we can draw from all this? That "direct democracy" and large mobilizations are now stirring in the bosom of several countries such as Chile, and that its fruits may eventually transform the way in which politics is done around the globe. Even the United States.  After all, except for its cultural variants, the disease is the same, and so could be the cure. (3)—PG

(Patrice Greanville, a social and media critic, is founding editor of The Greanville Post.)

Notes
(1) On the Concertación's history and evolution, see this.
(2) The US is an oligarchy, according to Martin Gilens and Benjamin I. Page
(3) Few political anatomists of the US condition match Paul Edwards for his elegance and acuity. Please see these essays, on this site: