Satire: Transcript of a Telephone Call to President Trump

Print this post.
Please make sure these dispatches reach as many readers as possible. Share with kin, friends and workmates and ask them to do likewise.
By Gary Olson 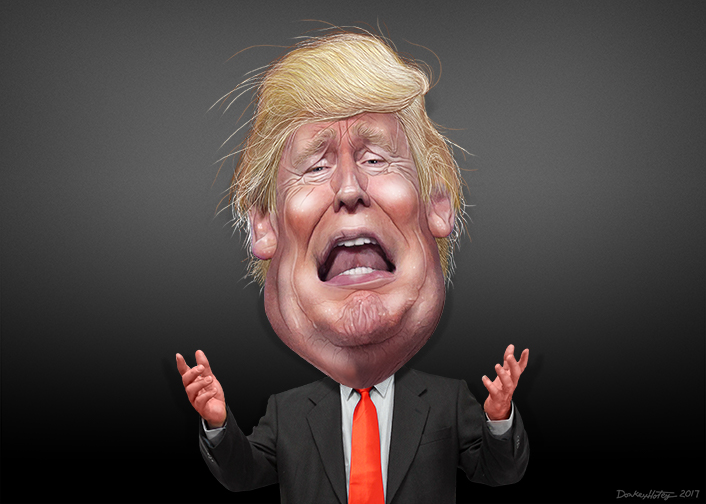 Caller: “Don, as your departure draws near, we’re calling to thank you for your service.  As you know we had some serious doubts about you at the outset — loose cannon, unguarded comments, and some crazy foreign policy ideas. But hey, our concerns were short-lived and we’re beyond grateful for the tax breaks, subsidies and deregulation. And your use of faux populism and race-baiting to keep the rabble in line, divert their attention and keep them off our backs was honestly — just masterful.

Trump: Yeah, just tremendous! Just tremendous! Best ever!
Caller:  Yes, well...that is until that unfortunate brouhaha over at the Capitol building the other day when some of your followers took your rhetoric a bit too seriously. I mean, we just can’t have buffalo-horned buffoons traipsing down the halls, cowboy boots perched on Pelosi’s desk, paintings knocked askew,  toilets left un-flushed and cigarette butts lying around in the world’s shining  citadel of democracy. (Audible chuckles).  And my God, a cop was killed by a couple of your morons. Don! Enough already!
Trump: Uhhhhh. Bad.Very Bad. Should never have happened. Bad.
Caller:  We can just be thankful that this wasn’t a genuine mass movement of 250,000 of disgruntled types practicing civil disobedience like that commie King yapped about back in the day.  Our response to THAT kind of nonsense might have put us in a pickle.
Trump: (audible laughter)
Caller: Yeah, I know, I know. No worries there. The sheep herding Democrats have all that under control and  even that loony “Squad” is finally on board.(more audible guffaws)
Trump: Great, just great!  Those bitches  have been a pain in the ass with their daily sound bites.
Caller: One unexpected silver lining is that that’s now there’s a welcome whiff of left-wing McCarthyism in the air that’s using language like “soft on fascism” against other radicals. That means less resistance when we tighten the screws on civil liberties to stop domestic terrorism and safeguarding democracy. Our friends in Silicon Valley are gearing up and will be enormously helpful.  (More chuckles)
Trump: It’s a beautiful thing, just beautiful!
Caller: Don, you know as well as anyone how important it is to maintain the appearance of a robust democracy without any substance. If we don’t tend to business, the ninety percent might start pickin’ up pitchforks.   That means demanding respect for all our sacred institutions. I mean, failure is a slippery slope...What next?  Sowing doubts about the American Dream, the rule of law, the  importance of voting for one of the two parties, American Exceptionalism and the glories of the free market? We need to remain vigilant.
Trump: (No response recorded)
Caller: So, anyway. We’re gonna be coming down on you pretty hard but don’t take it personally. It’s all Kabuki theater and we each play a part. It’s been a glorious four years but your role now is to exit the stage. We’ll call you if we need you but Biden is eager to carry on for us. Even before he was nominated, he assured us that nothing would fundamentally change and all the evidence so far suggests that’s the case. Hell, stocks are at record highs and the Dems aren’t going to tax or regulate us.
Trump: What’s a Kabuki?
Caller: Don. Gotta go. I know we don’t need to spell out the serious consequences of non-compliance. And hey, don’t slam the White House door on the way out! We’ll see you on the greens down at Mar-A-Lago.
24 Hours later: Trump announces “I can assure everyone that I’m doing everything possible to insure a smooth transition of power”

China Demonisations: The differences between Texas and Taiwan

America’s Battle Over the Nature and Direction of Change Itself