ANNOTATED BY PATRICE GREANVILLE
We got this email promoting Frontline's latest program this morning.

Neither the tone nor the subject shocked us too much. We have been witnessing Frontline's disintegration as a news source, its transformation into another fake news purveyor, for years.  It bears noting that the degeneracy of this program accelerated during Trump's obvious kakistocracy, when Frontline, a prominent member of the Democrat/liberal choir, became completely absorbed by the imperialist blob, apparently afflicted like the rest of liberaldom by Trump's derangement syndrome. Proof? Just look at this latest poisonous broadside against China. The allegations and innuendos are classical State Department smears. The "report" could have been scripted (probably was) in any of the many neocon think tanks whose job is to constantly promote hostility and even war against nations resisting the US empire's hegemonic embrace. I bet Mike Pompeo would be happy to endorse it. The usual tool, used here again, is disinformation, carried by as credible a source as the disinformer can find. Still‚ this being PBS, they have the gall to call what they do "journalism."  This is ugly, sordid business, for sure. Yet none of this should surprise us. Those who peddle war and shield sociopathic plutocrats for a living obviously have no conscience and no shame. —PG

If you are having trouble reading this email, view it in your browser.
Add newsletter@email.frontline.org to your contacts so you don’t miss an email. 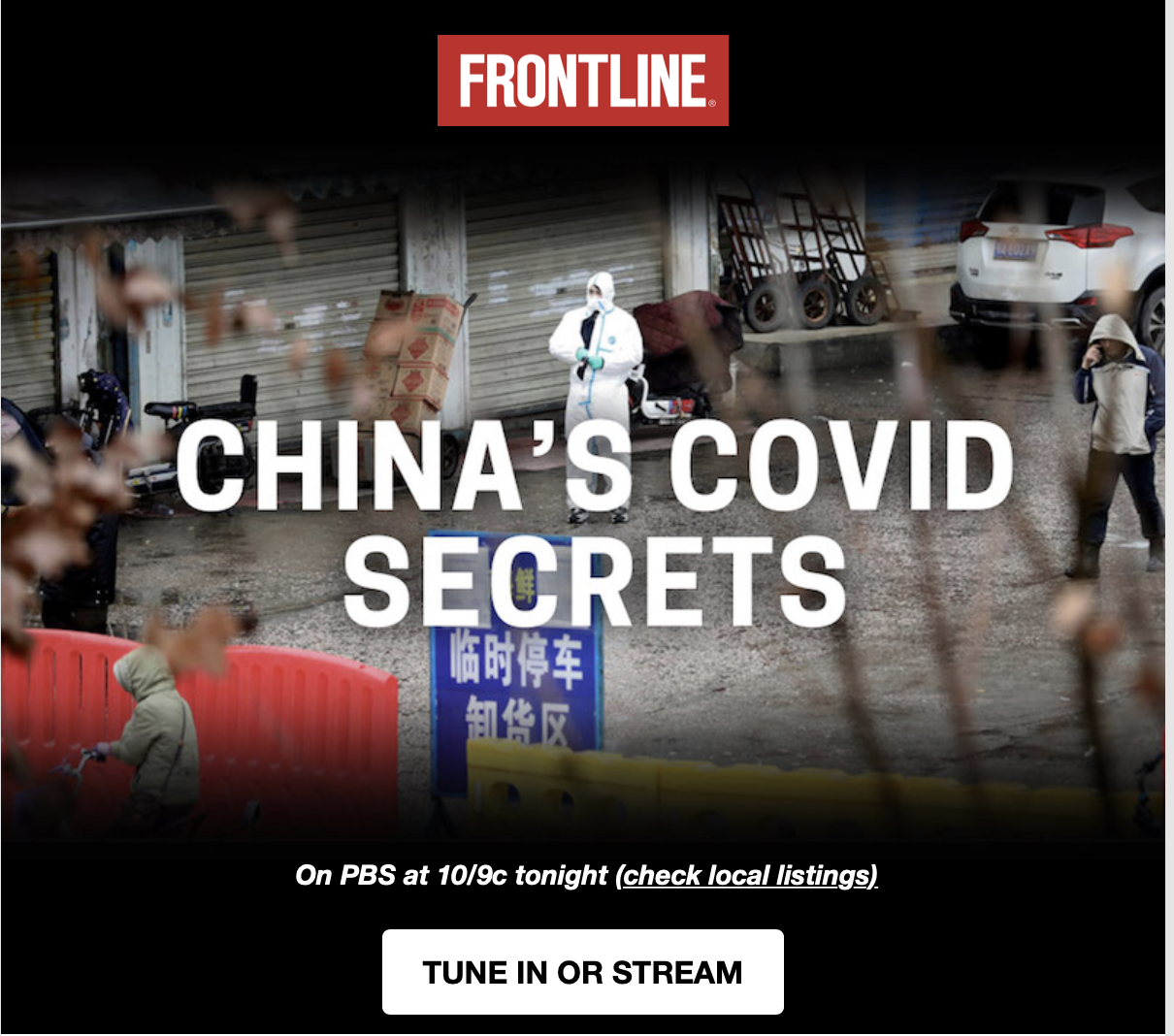 TUNE IN OR STREAM

In the months since its emergence in Wuhan, China in late 2019, COVID-19 has killed more than 2 million people worldwide, including approximately 440,000 in the United States.

Now, with leaked documents, secret recordings and firsthand accounts, a 90-minute FRONTLINE documentary reveals the gulf between what Chinese scientists and officials knew as the outbreak began and what they told the world.

“I believe that the true history needs to be remembered,” the first health care worker from Wuhan Central Hospital to talk to international journalists about what was happening in the early days of the outbreak says in China’s COVID Secrets. “We need to learn the lessons so that this doesn’t happen again.”

The Chinese government says it has acted with “openness, transparency and responsibility” in the fight against COVID-19. The accounts from doctors, scientists, experts and public health officials interviewed in China’s COVID Secrets paint a different picture.

Directed by Jane McMullen, tonight's documentary identifies numerous missed opportunities at the local and national level to suppress the outbreak early on, and reveals lessons for the world. In the 54 days between the first known person showing symptoms of the virus and the Jan. 23 lockdown of Wuhan, the film finds, local doctors who tried to sound the alarm were silenced. Local, provincial and national Chinese authorities downplayed the severity of the virus and kept international health officials and scientists in the dark.

In particular, the documentary reports, the Chinese government’s weeks-long insistence that there was no clear evidence of human-to-human transmission of the virus lost the rest of the world valuable time: “By the time we knew it was transmissible human-to-human, the cat was out of the bag. That was the shot we had, and we lost it,” says Professor Lawrence Gostin of Georgetown University, director of the World Health Organization (WHO) Collaborating Center on National and Global Health Law.

For the full story, watch China's COVID Secrets, a coproduction with the BBC that airs on PBS stations tonight at 10/9c (check local listings). The documentary will also be available to stream on our site, on YouTube and in the PBS Video App.

US Militarists Invent Enemies – and Russiagate — for Dollars