Corporate profit, electricity deregulation and the disaster in Texas

In a social disaster now entering its fourth day, as many as 4.5 million people have been hit by rolling blackouts or the complete shutoff of electricity in Texas. Millions have lost heat amidst winter storms that have sent temperatures plunging into single-digit Fahrenheit numbers (-13 C) as far south as Austin, the state capital. The blackout is the largest in US history caused by deliberate action of the power utilities.

As of Wednesday, according to the misnamed Electricity Reliability Council of Texas (ERCOT), the industry-dominated electricity distribution coordinator, 1.4 million people were without power in Houston, the state’s largest city, while one-fourth of residents in Dallas, the second-largest city, were similarly cut off. At least 21 deaths have been attributed to the combination of winter storms and power outages, with causes ranging from road accidents to house fires to people overcome by carbon monoxide.

The cause of the disaster is not any actual shortage in the production of electricity in the United States. On the contrary, the power supply is adequate and prices are comparatively stable. This social tragedy is the product of a series of decisions made by private corporations and public officials, all driven by a common concern: the maximization of capitalist profit.

Ten years ago, a mid-February deep freeze caused a power crisis in Texas. This prompted studies and multiple warnings of what might occur in the event of a similar or more far-reaching occurrence. The current crisis, occurring in the midst of the COVID-19 pandemic, is not a “natural” disaster, but the result of the deliberate and criminal refusal to heed those warnings.

The truth is that Texas is the number one producer of electrical power in the United States, with nearly twice as much as any other state. Any shortfall is entirely due to the criminal mismanagement by the corporate elite and its political front-men like Abbott and Perry.

A major factor is the decision of Texas state officials, adhering to Republican Party doctrine, to take no notice of climate change, despite a series of climate-induced disasters that have befallen the state—tornadoes, floods, droughts, wildfires. Above all, there was Hurricane Harvey, which spawned floods that devastated the Houston area in 2017, killing more than 100 people and causing damage estimated at $125 billion.

Climate change is believed to be a major contributor to the more frequent eruptions of the “polar vortex,” which bring bursts of super-cold air into regions where subzero temperatures have historically been rare.

But there are other political and economic decisions that underlie the current crisis. Texas operates a state-wide power grid that is disconnected from the major national grids that cover the remaining 47 states of the contiguous US. The state government has chosen this policy in order to evade the authority of the Federal Energy Regulatory Commission (FERC), which oversees power grids that cross state lines. The lack of a connection to neighboring states means that when the Texas system experiences a crisis, it cannot easily draw on external power supplies.

Such a crisis developed Sunday night as a savage midwinter cold front swept into the state. Sub-freezing temperatures knocked out nearly half of the state’s energy generating capacity.

While Texas politicians have focused on the fall in wind and solar generation, down about four gigawatts (million kilowatts), by far the biggest drop came in conventional gas-driven generation, which lost more than 30 gigawatts because the temperatures made it more difficult to pump natural gas out of underground storage tanks. Cooling water at some nuclear power plants froze. Even antiquated coal-fired plants were forced to close, as coal supplies froze to the ground.

The deep freeze drove up energy demand to nearly 70 gigawatts, as Texans sought to heat their homes. But the supply problems cut available electricity to less than 45 gigawatts. Prices on the spot market, the only means through which Texas utilities could draw additional power, rocketed from $22 a megawatt hour to $9,000 on Monday.

ERCOT instructed utilities not to pay the exorbitant short-term rate—which would drastically cut into their profits since many customers are paying longer-term fixed rates—and to impose rolling blackouts instead.

The shutdown of power plants that caused the power shortage was itself the result of the drive for profit. There is no technical obstacle to weatherizing power plants, whether gas-driven, nuclear or based on renewable resources like the sun, wind and water. Such plants operate even in Siberia, Canada and Alaska.

But the deregulation of Texas utilities meant that it was entirely up to corporate executives to decide whether to make the investments required to protect their operations from cold snaps that have become increasingly common in the last two decades. They declined to make such deductions from profit.

Moreover, Texas officials decided in the mid-1990s that they would no longer require utilities to set aside a certain proportion of capacity as a reserve against surges in demand. Elsewhere in North America, such supply buffers are maintained at 15 percent or more. But Texas had no backup plants to activate when the crisis hit.

Once the shutdowns began, all the inequities and injustices of American capitalism in 2021 were spotlighted. Working class and minority Texans live in substandard housing, without insulation against unexpected cold and without adequate heating capacity.

Residents of Houston, the fourth largest US city, could see the lights still on in the city’s downtown corporate headquarters while they were freezing in the dark. Poor people on ventilators and those dependent on feeding tubes had nowhere to go but hospital emergency rooms.

Few can match the Texas ruling elite and its political servants for blatant class prejudice. The mayor of Colorado City, a small town in west Texas, had to resign after a social media rant in which he denounced residents who expected local government do anything about the crisis. “I’m sick and tired of people looking for a damn handout,” he declared. “The City and County, along with power providers or any other service owes you NOTHING!” He continued with a tirade against “socialist government,” adding that the “strong will survive and the weak will [perish].”

This is not just the opinion of a backwoods reactionary. Former Texas Governor Rick Perry, who just concluded a four-year term in Washington as Trump’s secretary of energy, declared Wednesday, “Texans would be without electricity for longer than three days to keep the federal government out of their business.” This millionaire ignoramus is more than willing to fight to the last freezing child to keep Texas utilities unregulated.

Texas Governor Greg Abbott found time amidst the crisis to appear on the Sean Hannity program on Fox News and blame the crisis on solar and wind energy, although he admitted that these account for only 10 percent of the state’s output. 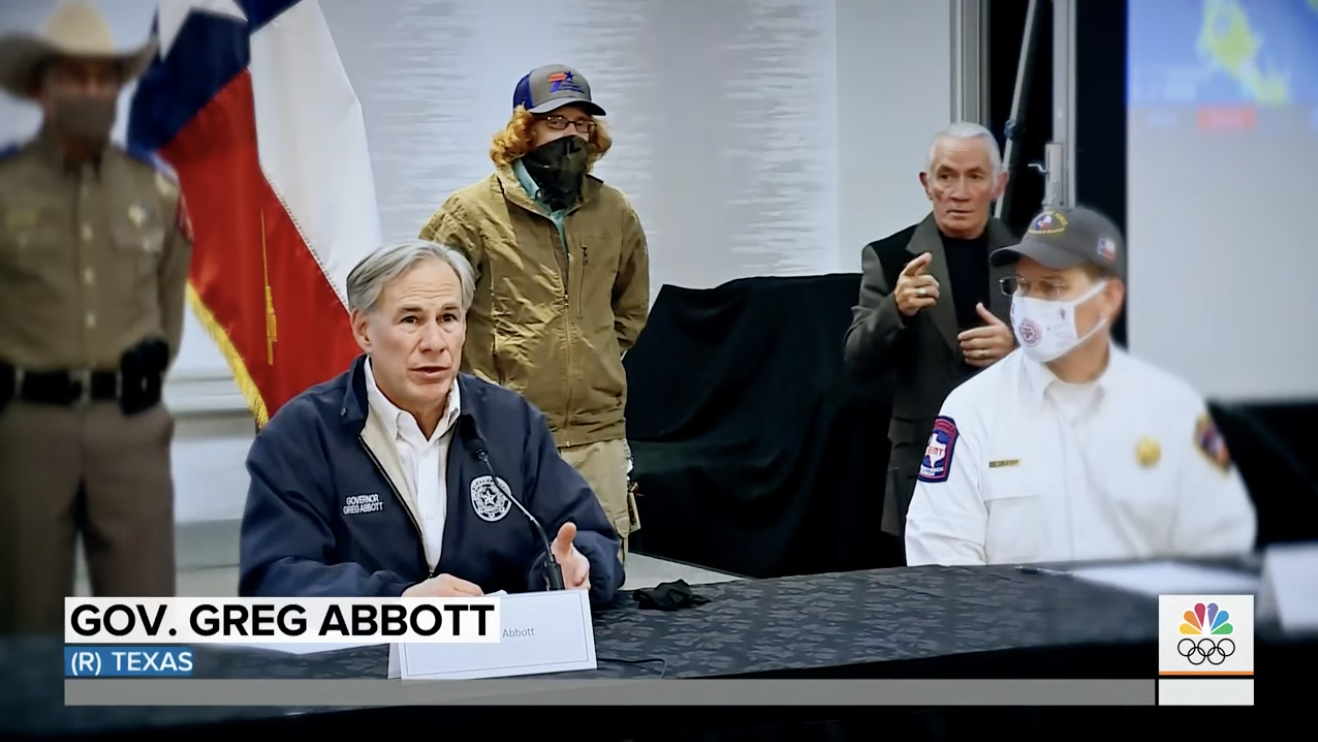 Gov. Abbott trying to cover his rump and that of his co-religionists in this manmade disaster.

The truth is that Texas is the number one producer of electrical power in the United States, with nearly twice as much as any other state. Any shortfall is entirely due to the criminal mismanagement by the corporate elite and its political front-men like Abbott and Perry.

Texas’ subordination of government policy to the interests of corporate profit and neglect of planning and infrastructure are not, however, the exception. They are rather a particularly stark expression of the rule in capitalist America. The same basic indifference and incompetence, driven by the same economic interests, has characterized the catastrophic official response to the COVID-19 pandemic, at the cost to date of half a million lives.

Nor does the installation of the Biden-Harris administration in Washington make a difference. The Democratic Party, like the Republicans, defends the capitalist system, including the production and distribution of energy based on private profit, not rational planning. Alongside the Republicans, the Democrats have overseen deregulation in order to boost the profits and personal fortunes of the corporate elite.

Only a socialist system, in which energy resources are nationalized as part of a planned economy, and organized to produce heat and light for all as a public service, offers a way forward for working people.

Patrick Martin is a senior editorialist with wsws.org, a socialist publication.

The Post-American World; Crooke, Escobar, Blumenthal and Marandi lay it all out