March 1, 2021
Please make sure these dispatches reach as many readers as possible. Share with kin, friends and workmates and ask them to do likewise. 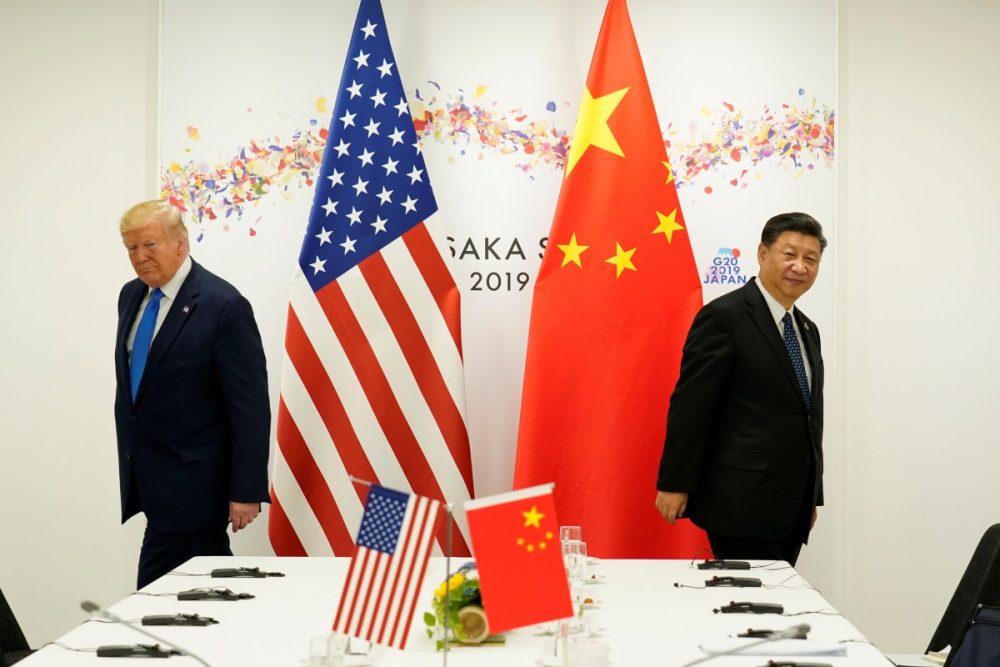 The Western empire has declared war on China, Russia an every other nation resisting its claim to global hegemony. China is currently being heavily demonized, but it won't work, says thr author, because the world has changed.

America's global power depends on a strategy of "containment" towards China. Containment is just a euphemism for aggression, hostility and confrontation. And such a strategy is bound to fail.

State planners in Washington seem to think that a Cold War policy towards China will deliver the same kind of victory that America claimed against the Soviet Union.

A recent set-piece article published by the influential Atlantic Council argued for "containment" of China which would subordinate and eventually bring about regime change in Beijing. The objective is to make the United States the sole global hegemonic power with no other competitor.

The problem with such thinking is that applying Cold War strategy is futile in today's world. Containment of the Soviet Union may have succeeded for the Americans because during that era the world was largely a bipolar division of power. Also, the Soviet Union was a relatively closed entity in terms of economic relations with the rest of the world.

Today, the world is wholly different. Instead of a bipolar configuration, there is the reality of a multipolar world. The global economy is much more integrated and China – set to become the largest national economy – is a key exporter, importer, investor and market. 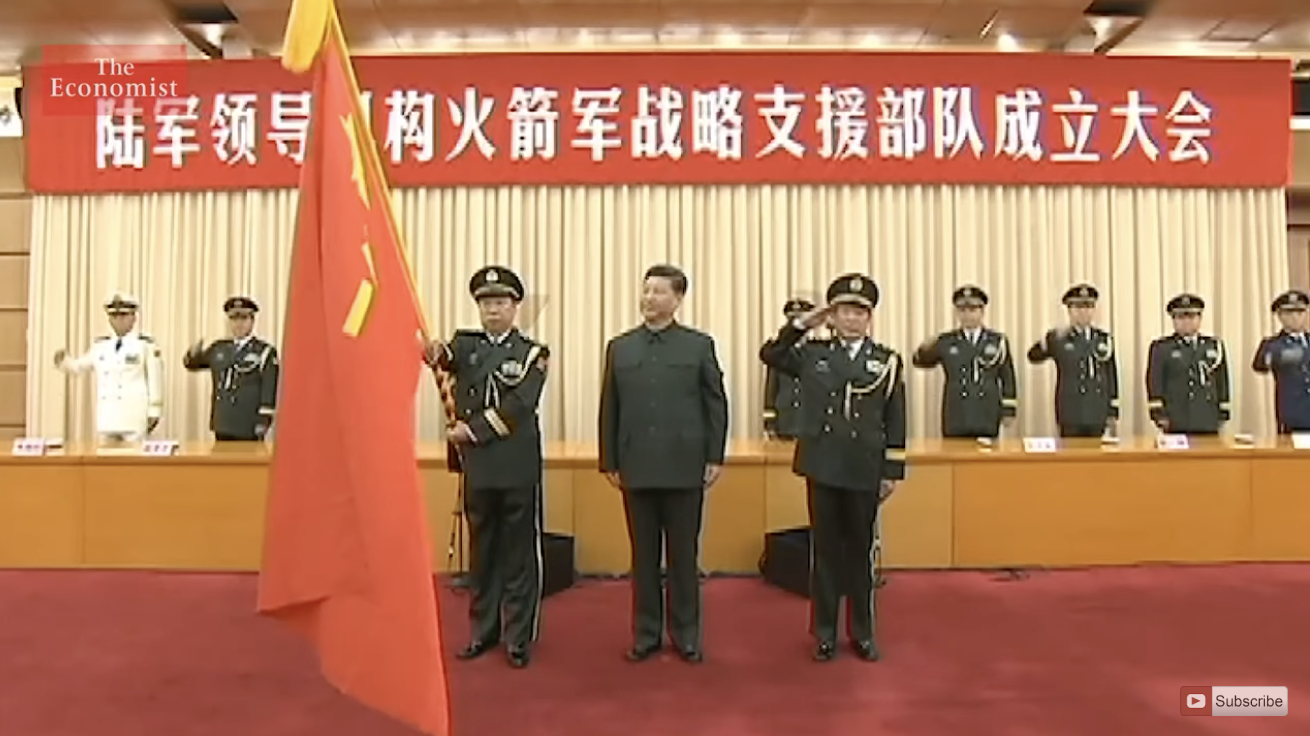 The previous Trump administration launched a trade war against China three years ago in an attempt to bully China into submission. But that policy failed. Trump only ended up hurting American producers and consumers which reflects the reality of how the American economy – like much of the world – is dependent on China. Trump's trade war was tantamount to cutting your nose off to spite your face. It was a folly of arrogance and no intelligence.

The new Biden administration is equally obsessed with trying to contain China, which shows how presidents in the US come and go but the deep state planners and imperial policy remain.

Biden may have dropped Trump's trade war rhetoric and tactics, but as the Atlantic Council article cited above indicates, Washington is still pursuing the objective of damaging and weakening China to furnish a government in Beijing that is subordinate to American global power ambitions.

American corporate capitalism depends on acquiring global dominance. Partnership, cooperation and multilateralism are anathema to the workings of US capital. This is why the American planners must defeat China and any other perceived rival.

But the reality of a multipolar world and integrated global economy makes the American Cold War strategy obsolete.

Unlike Trump's "America First" doctrine, Biden and the Democrats have a softer, seemingly more amenable approach to Western allies. Biden talks about "engaging" with allies and revamping the transatlantic alliance.

However, this new "engagement" is all about Washington trying to enlist Western allies in a hostile camp towards China so as to better achieve American objectives.

At both the G7 summit and Munich Security Conference earlier this month, Biden repeatedly flagged up China and Russia as adversaries and threats for the Western "allies".

The trouble for Biden and his deep state handlers is that Western allies cannot afford to accommodate his policy of isolating China and Russia. It is detrimental to their own self-interests.

China is now the biggest trading partner for the European Union, having surpassed the United States. China is a key market for Germany's export-led economy and Germany is the de facto leader of the EU. Russia is also essential for supplying Germany and Europe with affordable secure energy.

There is no way that Washington's attempts to polarise the world as it did with the Soviet Union will succeed. It is futile. The multipolar world that China and Russia often speak of is a reality, which means partnership and cooperation between nations is the only viable way forward. 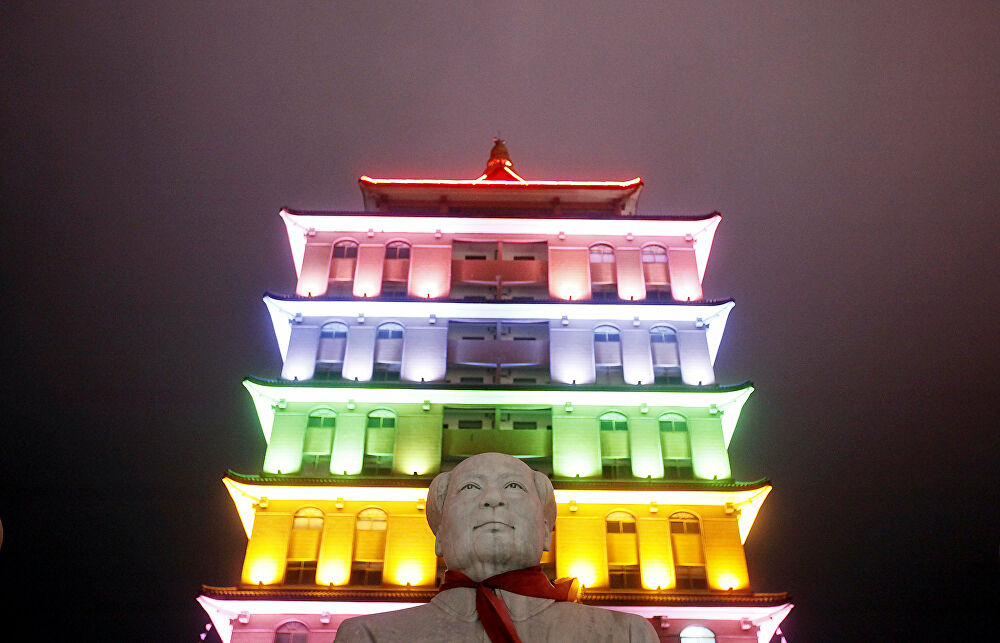 A statue of Mao Zedong in front of an illuminated pagoda-shape building in Huaxi, Jiangsu Province, China. The affection for Mao is almost universal in China.

American power is like a lumbering dinosaur living in a world whose political and economic environment has been transformed. It's a beast whose modus operandi has expired and no longer applicable.

There is of course the danger of military confrontation prompted by a desperate waning American power facing extinction. But fortunately, China and Russia are formidable military powers which America cannot realistically conceive of attacking. (How damnable that such a contingency could even be contemplated, but that’s the nefarious nature of American power for you).

Which leaves us with this consideration. If US power-play against China (and Russia) is futile and war is inconceivable, what will become of America?

If it wants to avoid internal collapse – a process of decay already underway – American society and its capitalist economy must in some way be radically transformed into a more democratic, egalitarian and drastically less militarist economy. Can the American people mobilise for this challenge?
ABOUT THE AUTHOR
[su_panel background="#f1f4f6" color="#1d1919" border="4px dotted #02101f" padding="10" shadow="1px 0px 1px #eeeeee" radius="11" target="blank"]

Finian Cunningham is an award-winning journalist. Originally from Belfast, Northern Ireland, he holds a Master's degree in Agricultural Chemistry and worked as a scientific editor for the Royal Society of Chemistry in Cambridge, England, before entering a career in journalism. [/su_panel]