A hearing of the House Subcommittee focused on anti-trust and monopoly abuses examines the role of the corporate media in these growing pathologies.

There are not many Congressional committees regularly engaged in substantive and serious work — most are performative — but the House Judiciary’s Subcommittee on Antitrust, Commercial, and Administrative Law is an exception. Led by its chairman Rep. David Cicilline (D-RI) and ranking member Rep. Ken Buck (R-CO), it is, with a few exceptions, composed of lawmakers whose knowledge of tech monopolies and anti-trust law is impressive.

In October, the Committee, after a sixteen-month investigation, produced one of those most comprehensive and informative reports by any government body anywhere in the world about the multi-pronged threats to democracy posed by four Silicon Valley monopolies: Facebook, Google, Amazon and Apple. The 450-page report also proposedsweeping solutions, including ways to break up these companies and/or constrain them from controlling our political discourse and political life. That report merits much greater attention and consideration than it has thus far received.

The Subcommittee held a hearing on Friday and I was invited to testify along with Microsoft President Brad Smith; President of the News Guild-Communications Workers of America Jonathan Schleuss, the Outkick’s Clay Travis, CEO of the Graham Media Group Emily Barr, and CEO of the News Media Alliance David Chavern. The ostensible purpose for the hearing was a narrow one: to consider a bill that would vest media outlets with an exemption from anti-trust laws to collectively bargain with tech companies such as Facebook and Google so that they can obtain a greater share of the ad revenue. The representatives of the news industry and Microsoft who testified were naturally in favor of this bill (they have been heavily lobbying for it) because it would benefit them commercially in numerous way (the Microsoft President maintained the conceit that the Bill-Gates-founded company was engaging in self-sacrifice for the good of Democracy by supporting the bill but the reality is the Bing search engine owners are in favor of anything that weakens Google).

While I share the ostensible motive behind the bill — to stem the serious crisis of bankruptcies and closings of local news outlets — I do not believe that this bill will end up doing that, particularly because it empowers the largest media outlets such as The New York Times and MSNBC to dominate the process and because it does not even acknowledge, let alone address, the broader problems plaguing the news industry, including collapsing trust by the public (a bill that limited this anti-trust exemption to small local news outlets so as to allow them to bargain collectively with tech companies in their own interest would seem to me to serve the claimed purpose much better than one which empowers media giants to form a negotiating cartel).

But the broader context for the bill is the one most interesting and the one on which I focused in my opening statement and testimony: namely, the relationship between social media and tech giants on the one hand, and the news media industry on the other. Contrary to the popular narrative propagated by news outlets — in which they are cast as the victims of the supremely powerful Silicon Valley giants — that narrative is sometimes (not always, but sometimes) the opposite of reality: much if not most Silicon Valley censorship of political speech emanates from pressure campaigns led by corporate media outlets and their journalists, demanding that more and more of their competitors and ideological adversaries be silenced. Big media, in other words, is coopting the power of Big Tech for their own purposes.

My written opening testimony, which is on the Committee’s site, is also printed below. The video of the full hearing can be seen here. Here is the video of my opening five-minute statement:

My full written statement, which focused on the key role played by corporate news outlets in agitating for online censorship against their competitors and ideological adversaries and the threat that poses to democracy, is printed below:

Before the House Subcommittee on Antitrust, Commercial and Administrative Law

Mr. Chairman and members of the Committee:

Thank you for the opportunity to testify.

I am a constitutional lawyer, a journalist, and the author of six books on civil liberties, media and politics. After graduating New York University School of Law in 1994, I worked as a constitutional and media law litigator for more than a decade, first at the firm of Wachtell, Lipton, Rosen & Katz, and then at a firm I co-founded in 1997. During my work as a lawyer, I represented numerous clients in First Amendment free speech and press freedom cases, including individuals with highly controversial views who were targeted for punishment by state and non-state actors alike, as well as media outlets subjected to repressive state limitations on their rights of expression and reporting.

Since 2005, I have worked primarily as a journalist and author, reporting extensively on civil liberties debates, assaults on free speech and a free press, the value of a free and open internet, the implications of growing Silicon Valley monopolistic power, and the complex relationship between corporate media outlets and social media companies. That reporting has received the 2014 Pulitzer Prize for Public Service and the George Polk Award for National Security Reporting. In 2013, I co-founded the online news outlet The Intercept, and in 2016 co-founded its Brazilian branch, The Intercept Brazil.

Over the last several years, my journalistic interest in and concern about the dangers of Silicon Valley’s monopoly power has greatly intensified -- particularly as wielded by Facebook, Google, Amazon and Apple. The dangers posed by their growing power manifest in multiple ways. But I am principally alarmed by the repressive effect on free discourse, a free press, and a free internet, all culminating in increasingly intrusive effects on the flow of information and ideas and an increasingly intolerable strain on a healthy democracy.

Three specific incidents over the last four months represent a serious escalation in the willingness of tech monopolies to intrude into and exert control over our domestic politics through censorship and other forms of information manipulation:

How Congress sets out to address Silicon Valley’s immense and undemocratic power is a complicated question, posing complex challenges. The proposal to vest media companies with an antitrust exemption in order to allow them to negotiate as a consortium or cartel seeks to rectify a real and serious problem -- the vacuuming up of advertising revenue by Google and Facebook at the expense of the journalistic outlets which create the news content being monetized -- but empowering large media companies could easily end up creating more problems than it solves.

That is particularly so given that it is often media companies that are the cause of Silicon Valley censorship of and interference in political speech of the kind outlined above. When these social media companies were first created and in the years after, they wanted to avoid being in the business of content moderation and political censorship. This was an obligation foisted upon them, often by the most powerful media outlets using their large platforms to shame these companies and their executives for failing to censor robustly enough.

Sometimes this pressure was politically motivated -- demanding the banning of people whose ideologies sharply differs from those who own and control these media outlets -- but more often it was motivated by competitive objectives: a desire to prevent others from creating independent platforms and thus diluting the monopolistic stranglehold that corporate media outlets exert over our political discourse. Further empowering this already-powerful media industry -- which has demonstrated it will use its force to silence competitors under the guise of “quality control” -- runs the real risk of transferring the abusive monopoly power from Silicon Valley to corporate media companies or, even worse, encouraging some sort of de facto merger in which these two industries pool their power to the mutual benefit of each.

This Subcommittee produced one of the most impressive and comprehensive reports last October detailing the dangers of the classic monopoly power wielded by Google, Facebook, Amazon and Apple. That report set forth numerous legislative and regulatory solutions to comply with the law and a consensus of economic and political science experts about the need to break up monopolies wherever they arise.

Until that is done, none of these problems can be addressed in ways other than the most superficial, piecemeal and marginal. Virtually every concern that Americans across the political spectrum express about the dangers of Silicon Valley power emanates from the fact that they have been permitted to flout antitrust laws and acquire monopoly power. None of those problems -- including their ability to police and control our political discourse and the flow of information -- can be addressed until that core problem is resolved.

What is most striking is that while Silicon Valley censorship of online speech and interference in political discourse is recognized as a grave menace to a healthy democracy around the democratic world, it is often dismissed in the U.S. — especially by journalists — as some sort of trivial “culture war” question when they are not actively cheering and even demanding more of it. Even more bizarre is that opposition to oligarchical censorship and monopoly power is often depicted by the liberal-left as a right-wing cause, largely because they perceive (inaccurately) that such oligarchical discourse policing will operate in their favor.

Whatever labels one wants to apply to it, it should not require much work to recognize that vesting this magnitude of power in the hands of unaccountable billionaires, who operate outside the democratic process yet are highly influenced by public media-led pressure campaigns, is unsustainable. 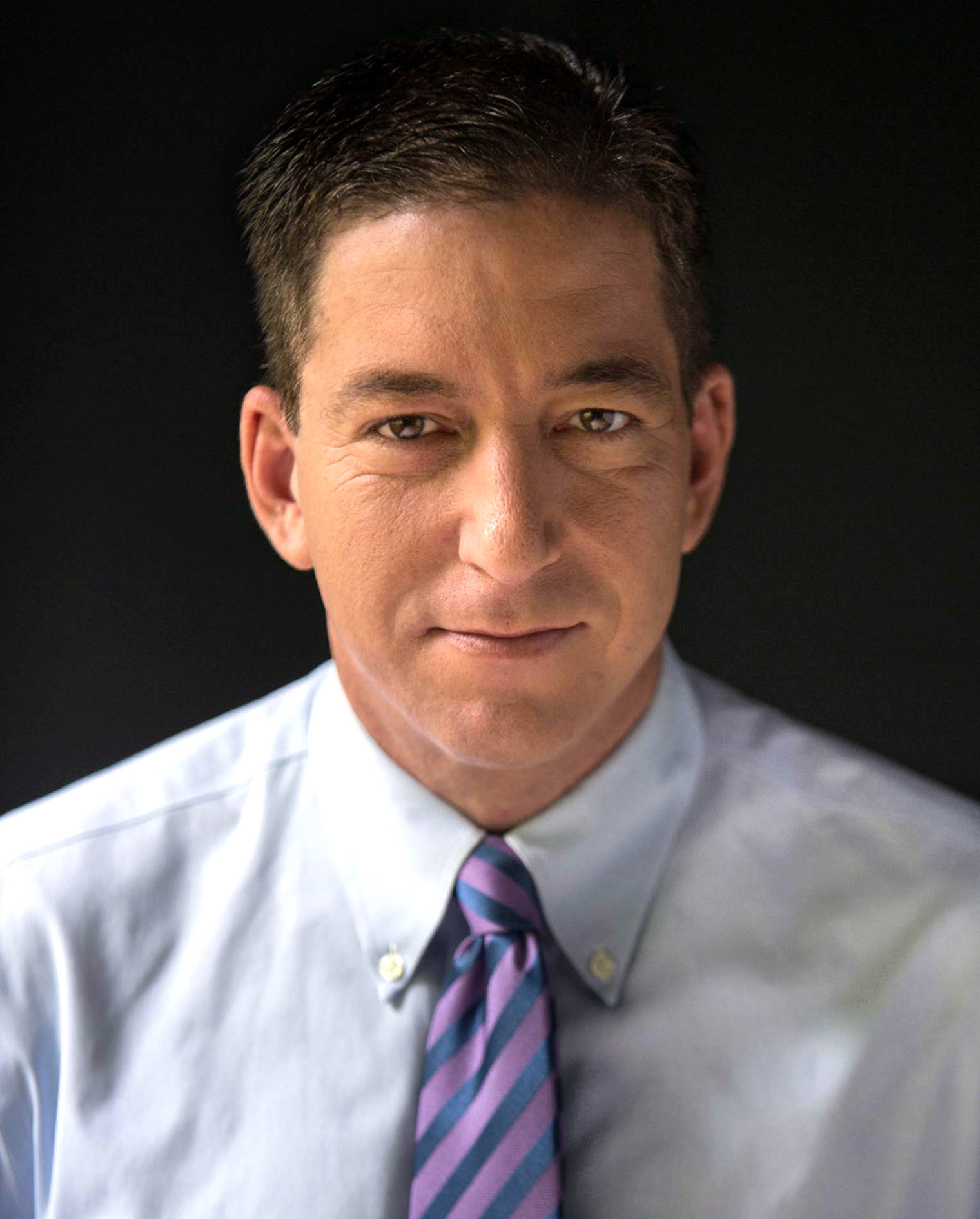 Glenn Edward Greenwald[1] (born March 6, 1967) is an American journalist, author, and former attorney. After graduating from law school in 1994, Greenwald worked as a corporate lawyer, before founding his own civil rights and constitutional law firm in 1996. In the course of nearly a decade of litigation, Greenwald represented a number of controversial clients in First Amendment cases. Greenwald began blogging on national security issues in October 2005, while he was becoming increasingly concerned with what he viewed to be attacks on civil liberties by the George W. Bush Administration in the aftermath of the September 11 attacks.[2][3] He has also maintained a critical position of American foreign policy in the Middle East and around the world ever since. Greenwald started contributing to Salon in 2007, and to The Guardian in 2012. In June 2013, while at The Guardian, he began publishing a series of reports detailing previously unknown information about American and British global surveillance programs based on classified documents provided by Edward Snowden. Along with other reporters, Greenwald won both a George Polk Award and a Pulitzer Prize for the reporting. He has also written best-selling books, including No Place to Hide. In 2014, he, Laura Poitras and Jeremy Scahill, launched The Intercept, for which he was co-founding editor until he resigned in October 2020. Greenwald then moved to Substack, an online newsletter-based journalism platform. [/su_panel]