Home AMERICAN BRAINWASH U.S. Gov’t. Walks Back Lie Against Russia, But Says that Russia Must Be Apologizing

U.S. Gov’t. Walks Back Lie Against Russia, But Says that Russia Must Be Apologizing 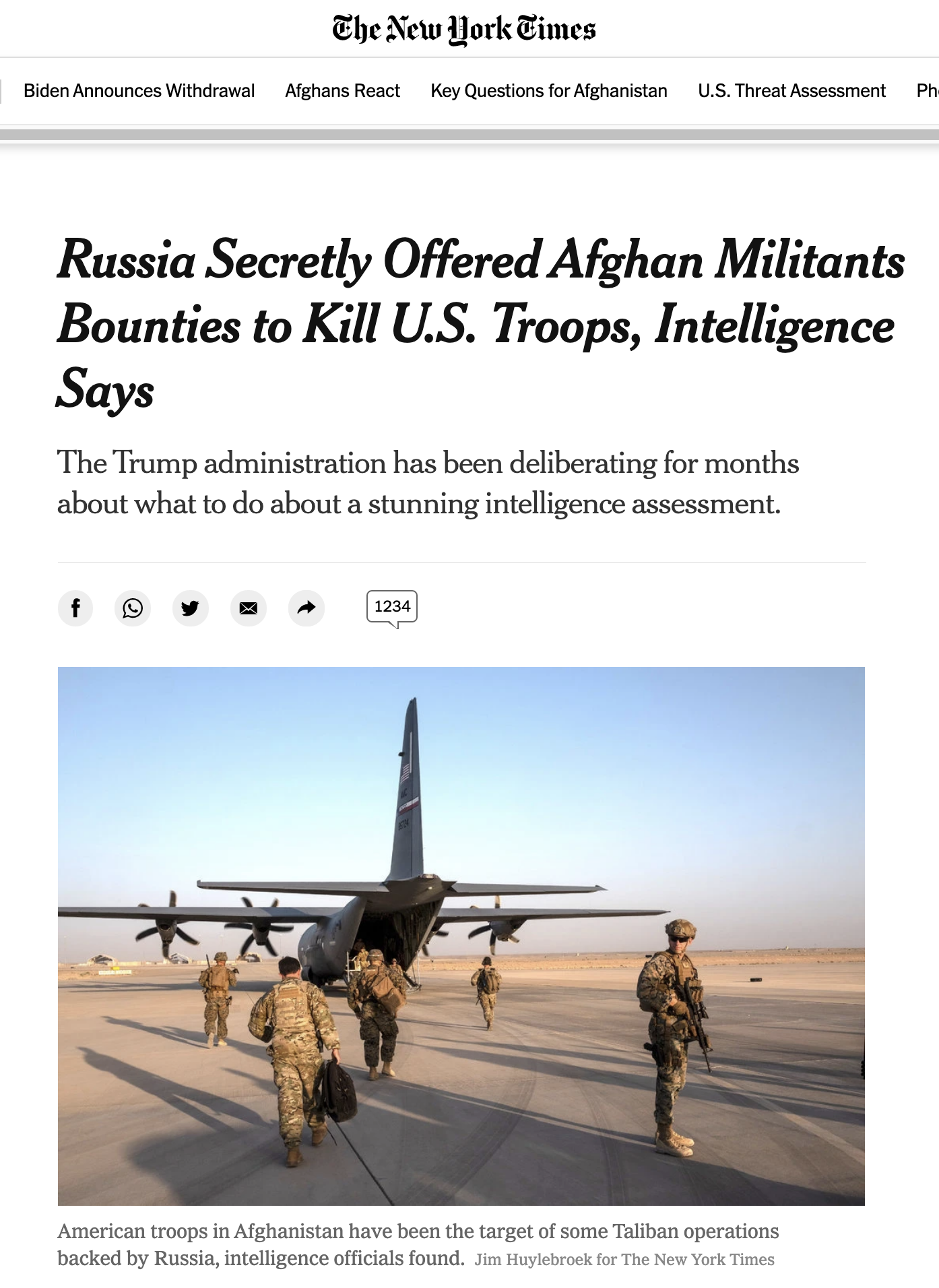 The dean of the American media lying a viva voce. But who cares? There are no penalties.

The beneficiaries of this scam are called America’s “Deep State,” and they rule here no matter whether serving Republican Party billionaires or Democratic Party billionaires. On April 15th, the Biden Administration, which has been saying that Russia probably placed a “bounty” on corpses of U.S. soldiers in Afghanistan, said that, actually, “U.S. intelligence only had ‘low to moderate’ confidence in the story,” but “This information puts a burden on the Russian government to explain its actions and take steps to address this disturbing pattern of behavior.” For good measure, the U.S. Government has now added yet more sanctions against Russia.
Adam Rawnsley and Spencer Ackerman of The Daily Beast headlined on the 15th, “U.S. Intel Walks Back Claim Russians Put Bounties on American Troops”, and reported that “Translated from the jargon of spyworld, that [statement from the Biden Administration] means the intelligence agencies have found the story is, at best, unproven — and possibly untrue.”
This lie had first been broadcasted on the front page of the New York Times on 26 June 2020, under the headline “Russia Secretly Offered Afghan Militants Bounties to Kill U.S. Troops, Intelligence Says”, and they reported that:
American intelligence officials have concluded that a Russian military intelligence unit secretly offered bounties to Taliban-linked militants for killing coalition forces in Afghanistan — including targeting American troops — amid the peace talks to end the long-running war there, according to officials briefed on the matter. The United States concluded months ago that the Russian unit, which has been linked to assassination attempts and other covert operations in Europe intended to destabilize the West or take revenge on turncoats, had covertly offered rewards for successful attacks last year.
The following day, the Washington Post bannered “Russian operation targeted coalition troops in Afghanistan, intelligence finds”, and reported that:
A Russian military spy unit offered bounties to Taliban-linked militants to attack coalition forces in Afghanistan, including U.S. and British troops, in a striking escalation of the Kremlin’s hostility toward the United States, American intelligence has found. The Russian operation, first reported by the New York Times, has generated an intense debate within the Trump administration about how best to respond to a troubling new tactic by a nation that most U.S. officials regard as a potential foe but that President Trump has frequently embraced as a friend, said the officials, who spoke on the condition of anonymity to discuss a sensitive intelligence matter.
Repeating their performances regarding numerous other such lies — including against Saddam Hussein’s “weapons of mass destruction” and threat of “a mushroom cloud that was allegedly only 6 months away on 7 September 2002 — America’s trashpapers of record (the nation’s two ‘top’ ‘news’-papers) have done yeoman’s work for Lockheed Martin and other ‘defense’ industry corporations, by deceiving the American public to support a military-industrial government of perpetual war and of fake dangers, when the real dangers against the American people continue to grow domestically and to rot away America’s economy.
The beneficiaries of this scam are called America’s “Deep State,” and they rule here no matter whether serving Republican Party billionaires or Democratic Party billionaires.
This scam on behalf of America’s billionaires is called “neoconservatism,” but it really is only American imperialism, and it has already destroyed Vietnam, Iran, Chile, Argentina, Bolivia, Guatemala, El Salvador, Yemen, Syria, Afghanistan, Venezuela, Ukraine, and many other countries. More gradually, however, it has been destroying America itself.

Investigative historian Eric Zuesse is the author, most recently, of  They’re Not Even Close: The Democratic vs. Republican Economic Records, 1910-2010, and of  CHRIST’S VENTRILOQUISTS: The Event that Created Christianity.
Our main image motif: Painted by famed Mexican muralist Diego Rivera, Glorious Victory is a critical and condemnatory view of the 1954 CIA coup of Guatemala’s democratically elected president Jacobo Árbenz Guzmán. The United States removed Árbenz from power and replaced him with a dictatorial military commander because Árbenz threatened the landholdings of the United Fruit Company with his agrarian reform laws. In the center of the mural, secretary of state John Foster Dulles is seen shaking hands with military commander and then president Castillo Armas, Washington's putschist general. Rivera paints Dulles with an expression of idiocy to demonstrate how he was too ignorant (or indifferent) to understand the terrible chain of events he had sparked.
THINK!

Journalists, Learning They Spread a CIA Fraud About Russia, Instantly Embrace a New One