Home ABOMINATIONS Biden’s Russia-China Tactic Is To Wage War AND To Ask For Cooperation. It Will Fail.

Biden’s Russia-China Tactic Is To Wage War AND To Ask For Cooperation. It Will Fail. 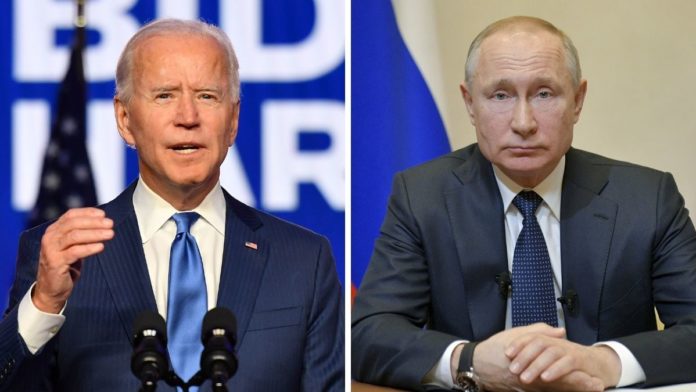 The policies of the Biden administration towards Russia and China are delusional. It thinks that it can squeeze these countries but still successfully ask them for cooperation. It believes that the U.S. position is stronger than it really is and that China and Russia are much weaker than they are.

It is also full of projection. The U.S. accuses both countries of striving for empire, of wanting to annex more land and of human rights violations. But is only the U.S. that has expanding aspirations. Neither China nor Russia are interested in running an empire. They have no interest in planting military bases all over the world. Though both have marginal border conflicts they do not want to acquire more land. And while the U.S. bashes both countries for alleged human rights issues it is starving whole populations (Yemen, Syria, Venezuela) through violence and economic sanctions.

The U.S. power structures in the Pentagon and CIA use the false accusations against Russia and China as pretense for cold military and hot economic wars against both countries. They use color revolution schemes (Ukraine, Myanmar) to create U.S. controlled proxy forces near their borders.

At the same time as it tries to press these countries the U.S. is seeking their cooperation in selected fields. It falsely believes that it has some magical leverage.

Consider this exchange from yesterday's White House press briefing about Biden asking for a summit with Putin while, at the same time, implementing more sanctions against Russia:

Q What if [Putin] says “no,” though? Wouldn’t that indicate some weakness on the part of the American administration here?

MS. PSAKI: Well, I think the President’s view is that Russia is on the outside of the global community in many respects, at this point in time. It’s the G7, not the G8. They have — obviously, we’ve put sanctions in place in order to send a clear message that there should be consequences for the actions; the Europeans have also done that.

What the President is offering is a bridge back. And so, certainly, he believes it’s in their interests to take him up on that offer.

The G7 are not the 'global community'. They have altogether some 500 million inhabitants out of 7.9 billion strong global population. Neither China nor India are members of the G7 nor is any South American or African country. Moreover Russia has rejected a Russian return into the G7/8 format:

“Russia is focused on other formats, apart from the G7,” Kremlin spokesman Dmitry Peskov said in a brief statement ..

Russia has no interest in a summit which would only be used by the U.S. to further bash Russia. Why should it give Biden that pleasure when there is nothing that Russia would gain from it. Russia does not need a 'bridge back'. There will be no summit.

Biden also  called for a climate summit during which he hopes to show 'American leadership' and to dictate to other countries, especially China, how much they will have to reduce their output of climate changing gases:

The Biden administration is nearing agreements with Japan, South Korea and Canada to bolster carbon emission reduction targets in all four countries ahead of a closely watched summit of global leaders on Earth Day, April 22.

But in the latest sign of how difficult it will be for President Biden to make climate change a core part of his foreign policy, similar deals with China, India and Brazil, economic powerhouses that together produce more than a third of global emissions, remain elusive.

John Kerry, Mr. Biden’s global climate envoy, is preparing to make a last-minute trip to China and South Korea ahead of the summit, which Mr. Biden will be hosting.

China however does not agree with U.S. 'leadership':

China has demonstrated its ambition in global climate governance, and also sent a signal to the US that climate negotiations between the two countries are on equal terms, and that China is not and won't be the "attendant" of US-centered climate campaign, Chinese observers commented on Wednesday.
...
Chinese observers called Washington's move as "trying to form a US-centered climate cooperation circle" in order to shore up its leadership on global issues. However, China has now shouldered the responsibility of global climate governance, as the US' frequent departure and then return to global cooperation on this issue has marred global cooperation and diminished other countries efforts, said Li.

Kerry is now in China where he had hoped to have top level meetings. But China's Chairman Xi has shown him a cold shoulder. The day before Kerry arrived Xi held his own climate summit with the German Chancellor Merkel and the French President Macron. It was the top news in Chinese media while Kerry's gig was hardly mentioned:

The leaders of the three countries exchanged in-depth views on cooperation in coping with climate change, China-Europe relations, anti-pandemic cooperation, and major international and regional issues.
...
The three leaders agreed that it is necessary to uphold multilateralism, fully implement the Paris Agreement, and jointly build a fair, reasonable, cooperative, and win-win global climate governance system, and promote this summit to achieve positive, balanced, and pragmatic results.

Kerry in contrast only met a Chinese climate envoy and had a virtual meeting with Vice-Premier Han Zheng. No new commitments were made to him.

Biden's and Kerry's exhortations about climate issues are also extraordinary hypocritical as the U.S. is currently attacking China's solar industry in Xinjiang with baseless allegations of labor abuse.

If Biden wants cooperation with Russia or China he needs to reign in the hawks and stop his attacks on those countries. As he is not willing or capable of doing that any further cooperation attempts will fall flat.

The U.S. has to learn that it is no longer the top dog. It can not work ceaselessly to impact Russia's and China's military and economic security and still expect them to cooperate. If it wants something it will first have to cease the attacks and to accept multilateral relationships.

Reality Inversion: The Tail Wags the Dog in Ukraine Tensions